The Secret Life of Teaching: Checking Your Self

Horace Dewey is the pseudonym of a high school history teacher at the equally pseudonymous East Hudson High School on the unpseudonymous island of Manhattan in the City of New York. This is the second in a series of articles entitled "The Secret Life of Teaching." (Read Part One.) 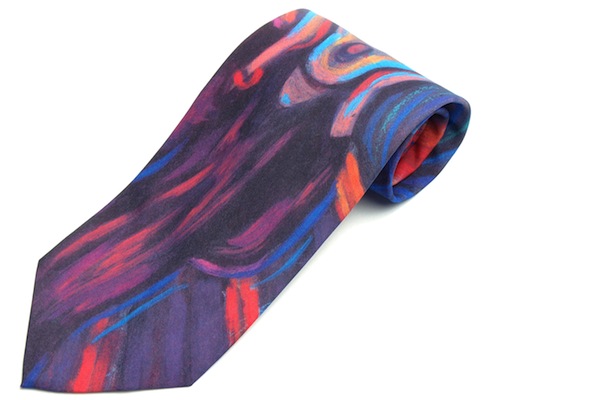 Image via Amazon. (Yes, you can buy your own Munch tie.)

When I turn around from standing in front of my closet to check the time, I see it’s 6:43 a.m. I’ve been rooted here in my underwear for a solid six minutes -- far too long. This was supposed to be easy. It’s Friday, which means I get to wear my favorite faded blue jeans and my solid navy blue cotton shirt. The question has been which tie should go with them. Even though it’s early in the semester, I’ve already gone through some of my favorites -- the one with Beatles album covers, the one with the Gettysburg Address, the Van Gogh “Starry Night.” What’s left? There’s Shrek, but that goes better with my black or khaki jeans. Ditto for the Chinese food. I love that Paul Klee my wife bought for me at the Metropolitan Museum of Art last summer, but that would be cheating, since I wore it the first week of school. There’s Superman, which gets lots positive comments, but I always feel a little immodest wearing it, as if I’m implying I’m Superman. I could go for a more low-key approach -- red polka dots on a field of royal blue, or the metallic paisley of red, blue and silver. But today is a full day, and since I’m teaching most of my classes, I’d like to don something from my A list.

Ah ha -- I remember I’m giving a unit test in my Humanities course today. I finger my way through one of the racks on the closet wall looking for tie I have with the pair of dice. I’ll imply taking a test is a game of chance. On my way there, though I encounter something even better: Edward Munch’s The Scream. Now that seems apropos for a test. Let’s see if anyone gets the joke.

Schools have varying rules about couture for faculty as well as students, but one way or another everybody wears a uniform. When left to their own devices, teachers usually opt for the informal, men (as usual) having more leeway, principally in the form of less censure for slovenliness. Sometimes, clothes make an ideological statement, most commonly when teachers express affirm their class politics by dressing down. Other times, fashion reflects complacency, if not sloth: my job is secure, and there’s no one I need to impress. Very often, it’s a matter of pragmatism; in a job where you spend a lot of time on your feet, sensible shoes (even athletic shoes) prevail. Of course, these and other motives mingle, as do manifold exceptions. But teachers rarely dress like doctors or lawyers, and while few are foolish enough to chase adolescent style, the choices of students do exert a gravitational pull, which is precisely why some schools to impose rules on both (and why both will try to stretch them).

I’m a fairly typical specimen in this regard. In the first years of my job as a high school teacher, I wore khakis, a dress shirt, a tie and work shoes. More recently, I’ve lapsed back toward jeans and cords, clinging to the shoes and (especially) the ties, which have become more colorful as my shirts have turned toward earth tones. The ties have become my signature -- most of my large and growing collection are gifts, and I only half-jokingly call them anti-soporific devices. They’re like a shaft of personality I allow to escape my otherwise unprepossessing visage.

The act of getting dressed in the morning -- in particular, the act of threading my belt and filling my pockets -- is one of the most satisfying rituals of my day. There’s a fixed sequence: keys on the left, phone on the right, comb back left and wallet back right. Pillbox with the keys; mints in the change pocket. I glide a lacquered pen (another indulgence) into my shirt pocket. My watch clips onto a belt loop, a legacy of carpel tunnel syndrome. So does my photo ID, a requirement that followed in the wake of school shootings and a reminder of the price we pay in prioritizing the freedom of gun owners over that of children. But I’d be lying if I didn’t confess that I regard that plastic card as a satisfying piece of girding for the day’s labor. Sometimes as I dress I imagine the lipstick rolling, the shirts buttoning, and the boots zipping as my fellow travelers converge on the building we share.

Among contemporary multicultural educators and consultants, there’s a discourse about the problem of students (and, in some cases, faculty) having to “check your identity at the door.” This discourse addresses the fact that there’s often a minority -- racial, sexual, socioeconomic, religious, disabled -- that feels obliged to conform to the dominant culture of a school, and to downplay, even deny, the realities of their own lives. This conflict continues when they return home, as they navigate the gap between their communities of origin and the ones they’re being socialized to join -- “code-switching,” in the lingo of multiculturalists. In some schools, administrators and parents strive to close this gap through tools like quiet subsidies for field trips, creating student affinity groups, and the like.

At the risk of some presumption, I’ll say that I have at least some idea about what these people are trying to do, because as an undergraduate scholarship student with growing awareness that many of peers lived decidedly different lives than I did, I experienced such tensions first-hand. I don’t insist they be embraced or passively accepted by students or those trying to help them. That said, I believe there are times and ways when there is nothing more liberating than checking your self at the door. When I enter a building literally bearing my identity as a teacher, the school logo trumps the idiosyncrasies of my face and all the other particularities of my life, among them that tie, an affectation likely to be ignored by others and forgotten by myself. Once I’m at work, I have a set of privileges and responsibilities that offer the promise of relief from self-consciousness. That promise isn’t always realized, of course, as often because I sabotage it as because outside forces (like a phone call from home) disrupt it.  Still, the mere prospect is among the most precious assets of the gainfully employed.

Students also savor checking their identities at the door and becoming members of mass, whether it’s that of a school, a class, or a member of a team. (Is there any talisman of collective identity more savored than those of the team jersey or varsity jacket?) There’s a long and dishonorable history of students being denied this experience, one that should be remembered and actively resisted. But this is a problem of exclusion, not suppression.

One of the most valuable aspects of checking your identity at the door is the way your memory of having done so remains with you after you’ve checked out. In some respects this is humbling -- the person in that bathrobe you see in the mirror is usually a good deal less impressive than the one you see after you get dressed. A similar laxity extends to behavior. More than once I’ve winced, after yelling at my kids or doing something else I regretted, when I imagined my students witnessing what I’ve just said or done. Ironically, playing a role can keep you honest.

It also has its guilty pleasures. When I was the father of young children and subject to the demands of that role, the promise of a working day at school felt like freedom. Days or weeks off -- and the absence of daycare that usually accompanied them -- loomed large. These days, I savor a holiday or three-day weekend as much as any of my colleagues, even if my pastimes are of the most quotidian kind. But pending burdens, like long-term illness or the aging parents, are always around to remind me that a job can feel like a vacation.

Each of us is a repertory company: we’re not really functional, much less happy, unless we’re playing a variety of parts. And changing costumes. Most of the time, we’re handed our scripts. The rest is a matter of interpretation -- and impersonation.

“Ooooh, The Scream -- I love it,” my colleague Denise Richardson, who teaches English, tells me while we wait on line for a cup of coffee before the first class of the day. “Feeling a little suicidal today, Horace?”

“How lovely. I’m sure your students will appreciate your solicitude.”

But they don’t seem to notice. When I enter the room most of the girls seem freaked out, poring over study guides and querying each other on the main provisions of the Mayflower Compact. I’m asked a few stray questions, which I answer as I arrange desks into rows, something I suspect reassures some of the students even as it may frustrate others. The exam goes off without a hitch; I’m asked leading or inane questions by students seeking to wring a few points out of me (“What does ‘predestination’ mean?”; “When you say ‘the Virginia Company’ do you mean a business or just a group of people trying to make money?”), which I try to deflect the best I can.

The last person to finish is Kim Anders, who’s double- (or triple-, or quadruple-) checking her work even as students are gathering just beyond the closed door, peering in as a hint that it’s time for her to clear out so they can get in for the next class.

“I saw that painting recently at the Museum of Modern Art,” she says, gesturing at my tie as she approaches me at the front of the room. “I went with my Dad. What’s his name -- Edward Mensch?”

“Is that supposed to be joke?”

Kim nods, mirthlessly. Then she walks over to the door, puts her hands to her ears, and issues a brief, punctuated scream: “HAAAA!” The kids on the other side flinch. After the initial terror, a few laugh; others look at her angrily.

Kim she looks back at me as she opens the door to exit. “Thanks, Mr. Dewey.”

Kim squints, considering the question. “Ummm, I dunno. The tie, I guess. I like it.”

“I should be thanking you,” I say with a smile. But Kim has already disappeared amid the incoming tide.