Emily Dufton is a PhD candidate at George Washington University, where she studies anti-drug movements of the 1970s. 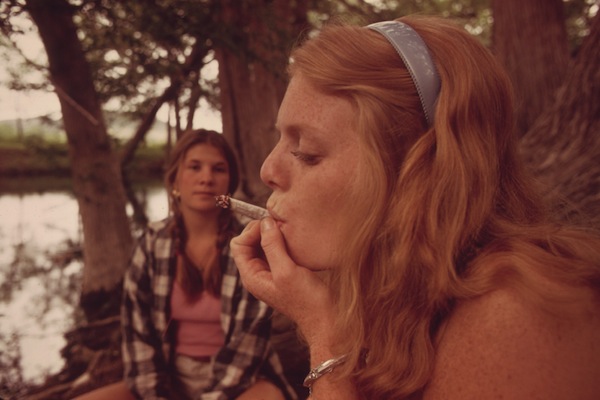 Four days after John Hudak, a fellow in governance studies at the Brookings Institution in Washington, D.C., declared that the spate of legalization laws scheduled for debate in 2014 was “the start of experimentation with marijuana,” David Brooks, the right-leaning columnist for the New York Times, mentioned just how passé he found the pot fad to be. “Like the vast majority of people who try drugs,” Brooks said, the friends with whom he had smoked pot “for a little while” during his teenage years simply “aged out” of their habit, abandoning it when they found new passions or their use became problematic. 2014 wasn’t the start of Brooks’ marijuana experimentation; instead, it was another year of “been there, done that.”

Despite the successful passage of legalization laws in Colorado and Washington in 2012, Hudak and Brooks also differed on how they viewed pot’s potential in the coming year. While Hudak argued that “the legalization movement [will] gain greater strength” by uniting “groups who normally bitterly oppose each other” over their blended interests in raising tax revenues and expunging discriminatory anti-drug laws, Brooks lamented the more spiritual issues at risk. Though Brooks admitted that “in legalizing weed, citizens of Colorado are, indeed, enhancing individual freedom,” he fretted that the state’s citizens were “also nurturing a moral ecology in which it is a bit harder to be the sort of person most of us want to be.”

Yet what is most surprising about Brooks’ article (or the similar editorial published by Ruth Marcus in The Washington Post the same day) is how vastly different these anti-legalization rants are from the ones that occurred forty years prior, during America’s first experiment with decriminalization. From 1973 to 1978, a dozen states containing over a third of the nation’s population legalized or decriminalized personal possession of up to an ounce of marijuana. In response, a wave of anti-pot articles was published, decrying the legislation’s negative effects. Doctors like Gabriel Nahas warned that excessive pot use caused “amotivational syndrome” and irreversible damage to reproductive cells and the brain. Prominent activists in the anti-marijuana parent movement, which formed in Atlanta in 1976 and spread nationwide by 1980, warned that weed caused boys to grow breasts and rendered girls infertile. Even congressmen like James O. Eastland of Mississippi publicly damned the drug, warning in a 1974 Senate hearing that “if the cannabis epidemic continues to spread at the rate of the post-Berkeley period, we may find ourselves saddled with a large population of semi-zombies,” a generation of teenagers that were “partial cripples” and “who have never matured, either intellectually or physically.”

One must wonder what Brooks or Marcus, who used their anti-legalization columns to defend their own youthful drug use, would think of that.

Still, despite how ludicrous much of the pot-bashing in the 1970s now seems, rates of adolescent drug use did rise during that period. It peaked in 1979 when 14.2 percent of 12-17-year-olds reported using marijuana in the past month. That same year, 11 percent of seniors reported smoking pot daily. In 1978, the New York Times reported children as young as 11 could easily buy drug paraphernalia at head shops, where items like a hash pipe-fitted baby bottle and grape-flavored herbal smoking mixtures were for sale. And the parent movement’s influential popularity thrived when families across the nation realized their young children had such easy access to drugs.

In response to this widespread adolescent drug use, the federal government enacted a war on drugs that placed the safety of children at the center of the battle. With the election of Ronald Reagan and the debut of Nancy Reagan’s prominent Just Say No campaign, most decriminalization laws were rolled back, replaced with strict anti-drug decrees that have made the United States the largest incarcerator of its population in the world. This shift changed how marijuana was viewed and prosecuted. Instead of arguing that adults had a right to use a drug that many claim is less harmful than alcohol, casual drug users were instead viewed as “accomplices to murder,” and faced excessive punishments like mandatory minimum sentences and losses of property to civil forfeiture. The racial disparities in marijuana arrest rates that resulted from these laws have also been widely documented, with blacks and Latinos arrested at disturbingly higher rates than whites despite reports that pot use is equal among racial groups.

With the passage of legalization in Colorado and Washington, however, as well as decriminalization measures passed in a variety of other jurisdictions, Americans are rethinking the effects of these laws. Even the anti-legalization views of Brooks and Marcus represent a remarkable shift in opinion. Those decrying legalization today are often doing so from a vantage point colored by their own youthful drug use. Aging baby boomers who can hearken back, as Marcus does, to “the age of bell-bottoms and polyester” are proof that “the generation of semi-zombies” Senator Eastland feared did not ultimately arise to drain the nation’s welfare coffers. Instead, many of the teenagers who smoked pot in the ‘70s have safely grown into functional, reasonable adults, the majority of whom support national marijuana legalization. Few would, I imagine, endorse rates of adolescent drug use rising back to 1979 levels, but many also recognize that pot’s ongoing illegality does not protect children from accessing the drug.

This current round of legalization thus represents a moment for a potentially profound historical awakening. In a sense, we are heading down a path that we, as a nation, have trod before. Yet, despite similarities to the 1970s, 2014 is neither the “start of experimentation with marijuana” as Hudak claimed, nor it is the “been there, done that” blasé of Brooks. Instead, the current legalization debate represents two things. First, it is a surprising embrace of social permissiveness, given much of the country’s divisive political tone, and second, it is a useful moment for us to learn directly from our past mistakes. We can, and should, look back at the results of decriminalization in the 1970s (and its effect on rising rates of adolescent drug use) as well as the results of the drug war in the ‘80s and ‘90s (and its effect on the mass incarceration of adults), and see how we can improve upon the negative outcomes of both. And then, by learning from these errors, we could be able to move forward with legalization in a manner that protects both the safety of children as well as the civil liberties of the 38 percent of adults who have admitted to using marijuana at some point in their lives.

Brooks claimed that, though he had smoked pot in his youth, the spread of marijuana legalization would prevent people from becoming the “kind of person” they wanted to be. Yet Brooks, Marcus and their fellow anti-legalization advocates who came of age in the 1970s must recognize that they are their own best evidence that decriminalization laws, if executed sensibly, do not destroy entire generations of youth. Their own past drug use neither prevented them from becoming the “kind of person” they wanted to be, nor did it land them in jail. That same opportunity should be extended to others. Rather than dismissing legalization, as Marcus does, by claiming that “society will not be better off with another legal mind-altering substance,” today’s critics should recognize that the “moral ecology” Brooks so desires is best served not through the excessive punishment of pot-smoking adults, but rather through a heightened awareness of the meaningful ways in which the rights of adults and children can equally be protected. Any thorough study of decriminalization’s past will reveal as much.