In Defense of the American Studies Association

Alan Wald has been a member of the American Studies Association (ASA) since 1988. He is the H. Chandler Davis Collegiate Professor at the University of Michigan. This is an excerpt from a longer, documented essay, “A Political Witch-Hunt in the Name of ‘Academic Freedom,’” appearing in the March-April 2014 issue of Against the Current. 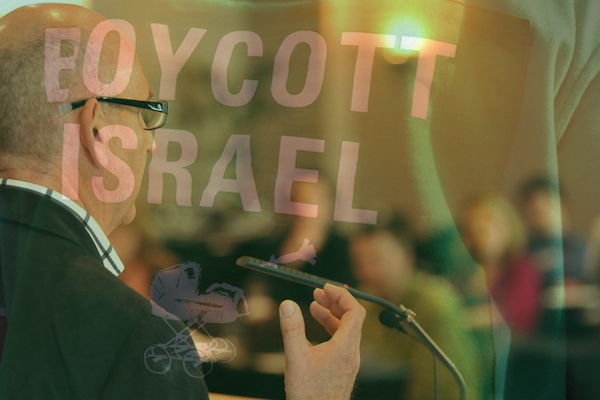 Imagine my surprise. For decades I have passively endured ritualistic sneering about the irrelevance of nerdy scholars in ivory towers, derision at the notion that we who toil in the archives might have an impact on anything of national significance. Then, on December 16, 2013, the membership of an almost unknown and relatively petite professional organization to which I belong, the American Studies Association (ASA), ratified a convention resolution to participate in a circumscribed “academic boycott” of formal collaborations Israeli university institutions at an official level to bring to light discrimination against Palestinians. “Ordinary” forms of scholarly activity were “expressly” not to be affected.

Starting with headlines in the New York Times and Washington Post, the ASA decree became the vote heard round the world. Every wing of the establishment suddenly went thug by playing a new game that might be called “Whac-a-Prof.”

In the Israeli press, the mostly hostile coverage was updated every day for weeks. In the United States, news of the ASA motion elicited not only the predictable effort to silence debate with charges of “anti-Semitism,” but also a torrent of abuse, outrage, and threats of lawsuits.

On January 14, 2014 came a letter of 144 members of the U.S. Congress to ASA President Curtis Marez, charging ASA with creating a “blacklist.” Hate mail of the most vile kind was sent to ASA members, especially those with Arab-sounding names, although Jewish supporters of the resolution were grotesquely besieged as well. One authority on academic freedom noted that “the American Studies Association has become the Emmanuel Goldstein of our times, the mythical object of the daily two minutes of hate in the novel 1984.”

Reported the Chronicle of Higher Education, “the Association has itself become the target of widespread criticism and ostracism. It has gone from relative obscurity to prominence as a pariah of the American higher-education establishment.”

Anyone familiar with how the mainstream press and university administrations have historically responded to criticisms of Israeli state policy, even before the current pogrom against ASA, need only sniff the wind to get the pungent whiff of a kangaroo court. Most of the published attacks employ identical hackneyed clichés to run roughshod over nuance, a blend of hyperbole and invective.

“The academic boycott of Israel voted for last month by the American Studies Association is the latest example of an anti-Semitism cloaked in the garb of political correctness,” declared a history professor at Drexel University. “This resolution runs contrary to the underlying spirit and principle of academic freedom, which seeks to protect intellectual inquiry and debate across a wide range of viewpoints and human experience,” announced the president of Brooklyn College. “Under the guise of phony progressivism, the group has initiated an irresponsible attack on academic freedom,” wrote the president of Wesleyan University.

Despite the self-righteous insults, and the demagogic conjoining of a symbolic “boycott” to “academic freedom,” the actual resolution passed by ASA can be assessed as an effort to expand the academic freedom of Palestinians (and therefore all of us) by what amounts to a symbolic slap on the wrist that draws attention to complicity in discrimination of Israeli educational institutions.

Ironically, the ASA concept of academic freedom mirrors that of its critics. Its document clearly states: “Whereas the American Studies Association is dedicated to the right of students and scholars to pursue education and research without undue state interference, repression, and military violence, and in keeping with the spirit of its previous statements supports the right of students and scholars to intellectual freedom and to political dissent as citizens and scholars…”

The critical difference is that the ASA resolution is for including Palestinians in its concerns: “Whereas there is no effective or substantive academic freedom for Palestinian students and scholars under conditions of Israeli occupation, and Israeli institutions of higher learning are a party to Israeli state policies that violate human rights and negatively impact the working conditions of Palestinian scholars and students...”

“Academic freedom” is a commendable but complex and variously interpreted ideal that faculty members must be free of anything that might inhibit “the search for truth and its free exposition” in their scholarship and teaching.

Almost everyone claims to support this principle, but what this means in practice can be harder to discern. Strictly speaking, it is usually taken to affirm that an academic institution cannot punish scholars for expressing controversial opinions in their research, or for holding unorthodox political or philosophical notions expressed elsewhere. The focus is on norms of professional scholarship, not necessarily identical to “free speech;” for example, scholars do not have the “right” to promote false ideas in academic publications or the classroom.

More commonly, and problematically, the concept of academic freedom is taken to mean that there should be no interference with a scholar’s right to pursue his or her work, to carry our free inquiry.

The difficulty with the malleability of this latter definition is that one can make a verbal charge of violating academic freedom wherever one sees a potential obstacle -- big or small -- to carrying out one’s standard activities. This includes the inconveniences, disruptions, and deprivation of resources that will always occur when the less powerful organize collective protests against the unfair, discriminatory and secretive practices of an institution.

From the political Right, the “Intelligent Design Movement” (promoting a theological alternative to evolution) fights for “Academic Freedom Bills” to require increased exposure of its views in classrooms; it interprets freedom as the externally-enforced imposition in the science curriculum of a belief viewed by most scholars as unscientific. Similarly, David Horowitz’s “Students for Academic Freedom” has campaigned for an “Academic Bill of Rights” demanding a judicial regulation of colleges to insure inclusion of conservative views and of faculty due to an alleged left-wing bias on campus.

On the Left, there is a long tradition of fighting for the expansion of academic and other freedoms through student strikes, classroom boycotts and building takeovers, usually targeting discriminatory practices such as anti-Semitism (as in the City College of New York boycott in 1948-49), racism (the “Freedom Day” boycott in Chicago in 1963), lack of free speech (UC Berkeley, 1963-64), and university complicity with the military-industrial complex through classified research (late 1960s).

These unruly actions persist in attenuated forms to the present, sometimes for ethical reasons but mostly to expand opportunities for the academically disenfranchised as well as to increase the boundaries of disciplinary fields that are studied. Nevertheless, such temporary disturbances of regular university operations invariably bring charges from liberals as well as conservatives that academic freedom is being impeded if not destroyed by the students.

Radicals hold a different view. For example, when the black student group “Harvard Afro” and a chapter of SDS (Students for a Democratic Society) protested a course called “Riot Control” at Harvard University in 1969, 108 faculty members placed this ad in The Crimson: “A university community dedicated to free inquiry and discussion cannot tolerate any interference with, or disruption of, its academic exercise….To preserve academic freedom in the University, we request the administration to take measures appropriate to assure the inviolability of instruction and examinations in all duly approved courses.”

Leaders of Harvard SDS defended the black students in The Crimson as follows: “The recent petition sponsored by a faculty group uses platitudes about academic freedom to cover up the main issue of racism at Harvard and is thus a direct attack on the black students who stopped the riot control course.”

Such episodes, in varying contexts and circumstances, suggest that differences about the role and responsibility of a university are not necessarily about the ideals of academic freedom; they are more frequently due to conflicting assessments of how academic freedom should be realized under specific conditions.

More precisely, when issues of racial and ethnic bias are involved, the issue may be whether or not a limited interference with one aspect of university operations might produce larger benefits for groups suffering discrimination.

Such clashing usages of academic freedom are germane to the present conflict in many ways. ASA, in its moderate embrace of the tradition of the more militant protests against anti-Semitism in the 1940s and racism in the 1960s, is willing to propose a minor disruption in academic life; the aim, however, is to start a discussion about ending discrimination against the academic freedom of Palestinian faculty and students.

ASA’s opponents, for a variety of reasons ranging from a different assessment of Israel to disagreement on strategy, feel this to be outrageous. What readers of the mainstream press may gain from the calibrated verbal assaults of the anti-ASA scholars and presidents cited above is a lesson in how not to read texts; their “interpretations” of the ASA position provide repeated demonstrations of the use of language to obscure inconvenient truths from oneself as well as others.