Forget 1991 or World War II: The Real Historical Parallel to the Ukraine Crisis is Poland's 1863 Revolt Against the Tsar 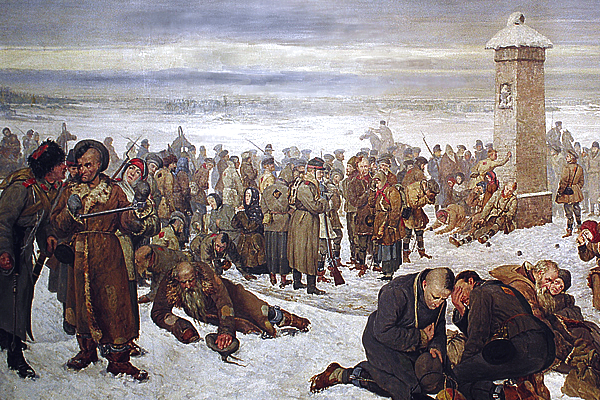 In January 1863, a full-scale rebellion against Russian control of Poland broke out in Warsaw. Because of Polish guerrilla tactics and the rebellion’s spread to other western areas of the Russian Empire (including parts of Ukraine), the rebellion continued into 1864. Russia’s harsh treatment of the rebels and the ineffectiveness of French and English protests against Russian actions are pertinent to Russia’s recent military actions in Crimea, which since the breakup of the Soviet Union in 1991 has been part of the independent nation of Ukraine. Prior to 1991 most (but not all) Ukrainians had for centuries been under Russian or Soviet control.

About the Western response to the 1863-64 crackdown, one prominent diplomatic historian wrote: “Although the Polish revolutionaries were unable to obtain concrete outside assistance, both France and Britain did offer encouragement and moral support to the movement. ... Throughout the rebellion the two powers had together sponsored a series of protests, which were delivered to St. Petersburg. These measures, unsupported by any actions of a practical nature, in no way aided the insurrection.”

Although the situations in Poland in 1863-64 and Crimea in 2014 differ in some ways, there are also important similarities. The most obvious difference between the Polish and Crimean situations is that in the former case Russia was putting down a rebellion in its own empire -- however distasteful such rule might be for the Poles -- while in Crimea, Russia is sending troops into a foreign country (Ukraine). The similarities, however, are more striking. They stem from

1) the complex mix of nationalities in eastern Europe,
2) Russian security (and insecurity) concerns and the resort to force to allay them, and
3) the weak position that Western powers find themselves in as they attempt to oppose aggressive Russian behavior.

To understand how these three points intersect in Crimea today some more historical background is necessary.

As a result of the actions of its neighbors Russia, Prussia, and Austria, the Polish-Lithuanian Commonwealth ceased to exist after the third of three partitions of that country in 1795. As a result of those partitions (the other two in 1772 and 1793), Russia gained a little over three-fifths of the lands of the pre-partition Commonwealth and a little under half of its population. These Russian-annexed lands were peopled by about seven and a half million people, mainly Belorussians, Ukrainians (together about 40 percent of the total), Poles (about 26 percent), Lithuanians (about 20 percent), and Jews (about 10 percent).

The Russian ruler at the time of the partitions, Catherine the Great, justified her second grabbing of Polish lands in 1793 by claiming she invaded in support of a confederation of Polish nobles opposed to the reforms spelled out in a constitution of 1791, reforms that would have strengthened the Commonwealth. In addition, during the 1780s and early 1790s, Catherine also successfully annexed the Crimea and constructed a Black Sea Fleet.

Russia’s victory over Napoleon extended its Polish acquisitions in 1815, and an unsuccessful Polish rebellion in 1830 led to reprisals making Russian rule over the Poles (and Belorussians, Ukrainians, and Jews) harsher. In 1847, a small group of Ukrainian nationalists were arrested that included the poet Taras Shevchenko (1814–1861), whose writings did more than those of any other nineteenth-century Ukrainian to foster a Ukrainian literary language and a sense and a sense of Ukrainian nationhood. For participating in an organization that proposed working toward the creation of a Slavic federation in which nationalities such as the Ukrainians would have their own autonomous national governments, he was sentenced to ten years in a Siberian military labor battalion.

As a result of fears arising from the Polish revolt, the Russian government in 1863 prohibited educational, scholarly, and religious publications in Ukrainian (or as the government labeled it, the “Little Russian dialect”). In 1876, the government went further by prohibiting Ukrainian from being spoken on the stage or by teachers in the classroom. Furthermore, Ukrainian could not appear in any new or imported publications or in school libraries.

The Russian fear of Polish and Ukrainian nationalism (or any other non-Russian kind) and harsh actions against non-Russian nationalism continued throughout the Tsarist period. And, despite a façade of the USSR being a free union of nationalities, the fear continued throughout the Soviet period. In 1897, no more than 44 percent of the Russian Empire’s population was ethnic Russian. In 1991, at the time of the breakup of the USSR into the 15 countries that had previously been republics within it, the Russian republic only comprised about half of the population of the old USSR (although about three-fourths of its territory). Nationality differences were one of the major reasons for the implosion of the USSR.

For centuries the complex ethnic make-up of Russia and its border regions has intermingled with Russian security concerns, and at times provided an excuse for Russian military actions. Since the collapse of the Soviet Union, Russia’s greatest fear has been the expansion eastward of NATO—and to a lesser extent the European Union. Partly to prevent NATO from including the former Soviet Baltic republics of Estonia, Latvia, and Lithuania, Russia claimed the right in the mid-1990s to use military force to protect Russians living abroad—in Latvia and Estonia, ethnic Russians made up about one-third of the combined populations. Despite a Russian statement in early 2004 that Russia would not tolerate NATO military forces in the three former Baltic republics, they became full members of the alliance (and the European Union) in the spring of 2004.

In 2008, after NATO indicated a willingness to work toward eventual inclusion of Ukraine and Georgia into the organization, Russia’s foreign minister stated that his government would do whatever necessary to prevent that from occurring. Months later Russia sent troops into South Ossetia and Abkhazia to prevent Georgia from reintegrating these two secessionist areas into the Georgian state. At present, after the fleeing of the pro-Russian President Yanukovych, Russia fears Ukraine may move closer to NATO and the European Union. So once again, it claims that “in the case of any further spread of violence to Eastern Ukraine and Crimea, Russia retains the right to protect its interests and the Russian-speaking population of those areas.”

But from Catherine the Great’s time (and even before) to the present, the main Russian concern has been its security. Russia was determined to make itself a Black Sea power, and from Catherine’s time until the present Russia’s Black Sea status and rights have remained important.

After its defeat in the Crimean War, the most distasteful clauses of the Treaty of Paris (1856) were those that prohibited any Russian warships or coastal fortifications in the Black Sea. Prior to the Polish revolt of 1863-64, Russia had hoped to get French help to remove these hated clauses, but the bad feelings arising from France’s (verbal) support of the Polish rebels soured Russo-French relations during the remainder of the 1860s.

And unsurprisingly, from 1991 until 1995, how to split the former Soviet Black Sea fleet remained a contentious issue between Russia and Ukraine. But in 1995 the two countries agreed that Russia would eventually end up with a little over four-fifths of the original fleet and would be allowed to continue using the naval base at Sevastopol. In 1997 and 2010 new agreements were signed, allowing the Russian Black Sea fleet to remain at Sevastopol until 2042. A recent Atlantic article on the present crisis in Crimea quotes one expert, Thomas de Waal, as saying: “Russia has one overwhelming strategic asset in Crimea: the Black Sea naval base in Sevastopol. My guess is that Putin’s main goal in Crimea is to maintain that base at all costs.”

In both 1863-64 and today the main question in the West, whether England and France then or the USA and NATO today, is “What can be done to deter or rollback the use of Russian military force?” The answer a century and a half ago in regard to the Poles was very little unless the two Western powers were willing to go to war, which they were not. Some Western observers fear that today the answer is similar regarding any rollback of the Russian incursion into Crimea. President Obama, other Western leaders, and NATO are scrambling to come up with a package of measures that will persuade Russia to withdraw its troops from Crimea and desist from any further attempts to encourage separatist activities in eastern Ukraine, where they have already manifested themselves. The danger of a major escalation of fighting in Ukraine remains strong.

In 1863-64 Western sympathies were with the Poles. In 1956 with the Hungarians. In 1968 with the Czechoslovaks. Today, with the Ukrainians. In the first three cases, sympathies were insufficient to prevent bloody Russian crackdowns. We can only hope that today Western leaders can be creative enough in their diplomacy and sanctions to turn back Russian aggression and prevent further bloodshed.