When Cigarettes Were Good for Women

Blain Roberts is associate professor of history at California State University, Fresno. She is the author of Pageants, Parlors, and Pretty Women:  Race and Beauty in the Twentieth-Century South.

A recent advertisement in the Sports Illustrated swimsuit edition for blu eCigs, a popular brand of electronic cigarettes, hit what one public health expert has called “a new high in terms of chutzpah.” It is audacious, though a more literal description might be that the ad hit a new low: it’s a crotch shot, showing a woman’s body cropped from just above her pierced belly button to her mid-thighs. A miniscule black bikini bottom, adorned with the company’s logo, barely covers what’s underneath.  Posed provocatively around the bikini, the woman’s hands appear ready to remove the item of clothing, if you can call it that. The caption reads, “Slim. Charged. Ready to Go.” 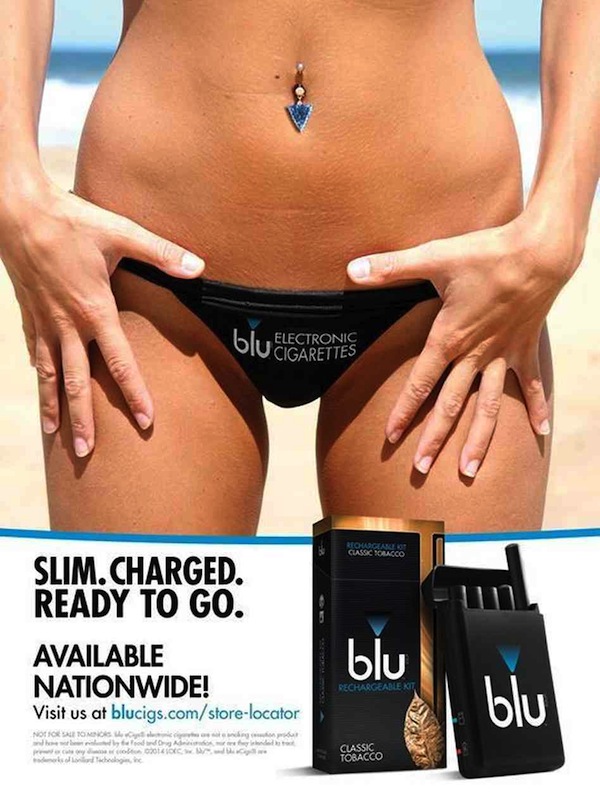 Doctors and public health advocates worry about ads like these, which associate e-cigarettes with female sexuality in a bid to attract male consumers, especially teenage boys, who may be tempted to take up vaping and thus put themselves at risk for nicotine addiction.

Beyond the health consequences of such marketing tactics, anyone who cares about the effects of exploiting and sexualizing women’s bodies has obvious reason for concern, too. After all, the blu eCig model seems as much the commodity as the e-cigarette. She is objectified by the ad’s producers, as she will be, presumably, by its consumers as well.

Tobacco and women’s bodies have a long history, to which e-cigarettes (technically tobacco-less) are indebted. Yet this ad belies the complexity of this past. Surprisingly, the sexual sell in the tobacco market—and tobacco use itself—provided modern American women a way to lay claim to their desires, sexual and otherwise.

For years, Americans frowned upon both female tobacco use and female sexuality. Throughout the nineteenth century, the Victorian understanding of separate spheres, which deemed women morally superior and sexually passive, proscribed a variety of activities, like sex (outside of procreation), drinking, business, and politics. These pursuits and pleasures were for men, as was enjoying tobacco—whether it was by chewing it or smoking it in a pipe or cigar, all sensual activities that bordered on the sexual. Tobacco use was simply off-limits to respectable, middle-class women, white and black. Only prostitutes, actresses, and bohemians indulged in the tobacco habit, which sealed its association with a lack of womanly virtue.

Change came fitfully.  In the 1880s and ‘90s, the American Tobacco Company, the Durham, North Carolina, manufacturer that pioneered the selling of cigarettes, bucked traditional standards. It wasn’t that the company targeted potential female smokers; rather, it introduced salacious trade cards into cigarette packs to appeal to men. The cards featured pictures of women scantily dressed, at least by the conventions of the day. Uncovered arms and legs were in abundance, as were stockings, ribbons, and fringe. The cards were brazen acknowledgements of women’s sexuality. Respectable Americans were not ready, and critics pounced.

Yet by the 1910s and ‘20s, a full-blown challenge to Victorianism was underway, with young women leading the charge. They demanded the right to bob their hair, wear cosmetics and short skirts, and, like their male peers, dance, drink alcohol, have sex, and, of course, smoke cigarettes. As Zelda Sayre Fitzgerald, a precocious teenage smoker and quintessential Jazz Age figure put it, flappers altered everything about their behavior and appearance and “went into the battle.”  The battle to break free from restrictive norms and assert their individuality was waged, and largely won, in cities and on college campuses, in cars and in nightclubs, and in tobacco advertising campaigns, which increasingly supported women’s new desires. Liggett and Myers, maker of Chesterfields, released a magazine ad in 1926 with the tag line “Blow Some My Way.” The illustration featured a woman gazing longingly at her cigarette-smoking companion.

Several years later, a woman in a Chesterfield spot, shown lighting her partner's cigarette, said coyly,  "Somehow, I just like to give you a light."  The Chesterfield slogan, "They Satisfy," drove home the message: female sexuality and tobacco use were now celebrated."

By the 1930s and ‘40s, the use of female sexuality to promote tobacco had even migrated to the tobacco farms of the Southeast. This region grew much of the tobacco sold in the United States, and during the lean years of the Depression, it needed to pump up demand. Trade boards sponsored beauty pageants for rural women (all white, given Jim Crow customs), who vied for the title of tobacco queen and sometimes competed in skimpy two-piece outfits made out of dried tobacco leaves. Hardly asked to shun the product, women and tobacco were one and the same.

This fact alone made the photographs taken of the beauties arresting, but the images were also suffused with sexual innuendo and phallic images. These photos show contestants and queens putting themselves up for evaluation and auction, like tobacco brought to market for sale. They leisurely puff on foot-long cigarettes and smoke corncob pipes as men, standing in intimate proximity, look on with rapt attention.  What these men were thinking was an open question. In one photograph from the mid-1940s, a North Carolina tobacco queen held a tobacco leaf over her breasts. It was obvious that with one movement she could have been topless. 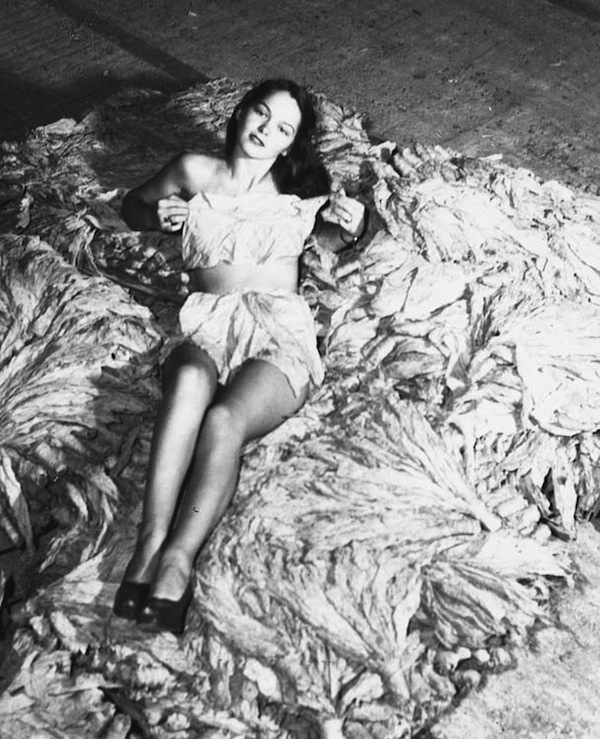 Used for marketing purposes, these images were intended for tobacco consumers everywhere, but it’s worth emphasizing that this unusual iconography was intended, in part, to chip away at deep-rooted objections to female smoking in rural areas, where only 8 per cent of women smoked, compared to about 40 percent in cities. The photographs glamorized the sensuous pleasures of tobacco use, suggesting to farm women that smoking, and freer expressions of sexuality, were theirs to claim. Women in more conservative parts of America who subsequently picked up the tobacco habit thus redefined what it meant to be female in their communities.  In the South especially, where a Gordian knot of patriarchy and white supremacy depended upon the sexual subordination of women, this was not an inconsequential development.

All of this culminated in the famous Virginia Slims campaign, launched by the Richmond, Virginia-based Phillip Morris Company in 1968, to promote the new, slimmer cigarette made just for women. Capitalizing on the modern women’s movement, Phillip Morris embraced the language of feminism to demonstrate, as the tag line proclaimed, “You’ve Come a Long Way, Baby.” Ads contrasted the contemporary, sexually liberated woman, Virginia Slims in hand, with her oppressed female forebears. In one magazine spot, images of a turn-of-the century housewife suffering from the drudgery of household chores—like churning butter!—were paired with the tongue-in-cheek rhyme, “I want a girl, just like the girl that married Dear Old Dad. She’ll wash the floors, polish up the doors, and never make me mad. She won’t smoke or be a suffragette, she will always be my loving pet.” Underneath, the Virginia Slims smoker smiled knowingly at the reader. 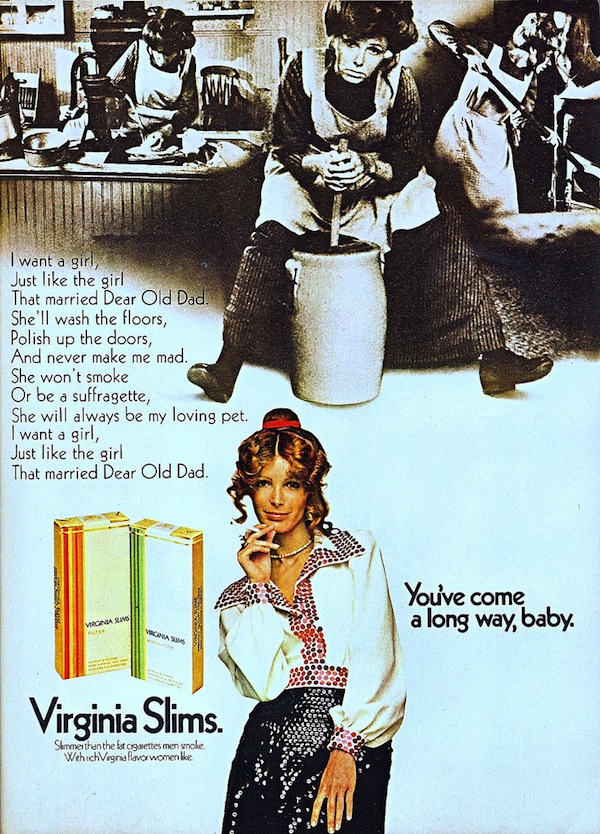 The modern woman had come a long way, and tobacco, as this history demonstrates, had helped get her there. Still, there were clearly pitfalls in this strategy of advancing women’s emancipation. Lung disease and death seem a poor trade-off for not having to wash the floors.

Moreover, the line between sexual empowerment and sexual objectification was a thin one, easily transgressed. Sometimes it was difficult to determine who controlled the sexuality on display. The recent blu eCigs advertisement highlights this problem in a striking way: it’s hard to argue that the bikini-clad woman is empowered when you can’t even see her face. This ad, in short, provides a cautionary reminder. When it comes to fighting for women’s liberation, we must be careful in selecting our weapons.