Romain Huret is a French historian. His book, American Tax Resisters, will be published on April 15, 2014 by Harvard University Press. 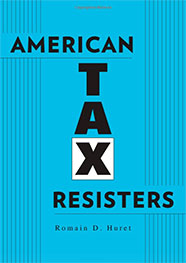 In a recent New York Times op-ed, Paul Krugman rightly emphasizes that progressive taxation is almost as American as apple pie. To a large extent, Americans invented the most ambitious form of taxation of income over the past century—as well as its most radical opponents. The conservative intellectual and Reaganite Jude Wanniski perfectly described these two different worldviews with his famous Santa Claus metaphor. In his conservative Christmas carol published in the National Review in 1976, he told the story of two Santa Clauses—one Santa spends everything, while the other promotes tax reduction. For Wanniski, the spending Santa resembles President Franklin Delano Roosevelt, while the other looks like the famous Treasury Secretary Andrew W. Mellon in the Roaring Twenties. Full of admiration, Wanniski extolled Mellon’s virtue of espousal of the free market and individualism as an example for all generations of Americans. “Any man of energy and initiative in this country,” Wanniski declared, could get what he wanted if his “initiative” was not “crippled by legislation or by a tax system.”

Since the end of the nineteenth century, this tradition of tax resistance has been defended by the most affluent and most advantaged groups in American society. Taking a very strong stance, they fired against what they considered an attempt to undermine the foundations of American exceptionalism. Most of the time, the ideology that eagerly infused their speeches and orations was--and still is--not a coherent set of theories, guided by high intellectual principles, but more a set of beliefs based upon common sense, historical precedents, and empirical analysis. Progressive taxation has been decried as a Pandora’s Box of foreign ideologies promoted by idealistic professors and politicians. As a consequence, tax resisters have characterized their enemies as cosmopolitan elitists or naïve citizens who want to dupe honest Americans, and they have always believed they were uniquely positioned to defend individuals and the market against the intrusion of the federal government. Margaret Thatcher’s famous motto, “There is no such thing as ‘a society,’ ” perfectly aligns with their own assumptions, and captures their response to the philosophy of progressively.

For them, the very concept of the “sacrifice” of rich taxpayers defended by Progressives was nothing but “class legislation.” As early as 1888, economist David A. Wells warned citizens against “the communism of a discriminating income-tax” that would inflict “spoliation” of a small class of citizens. As a consequence, graduated tax rates were pure and simple “confiscation.” The federal government had no right to decide how rich people should spend their money, and it had no right to redistribute money to other citizens. Contrary to what tax reformers affirmed, progressive taxation would destroy incentives and cause demoralization of the most energetic and entrepreneurial citizens. In such a Manichean view, the transfer of funds from one class to another appeared as nothing but inept and wasteful legislation that strongly threatened the American Republic. Eventually, tax resisters denounced the idea of tax forms promoted by Progressives as a means of curtailing tax evasion.

In the end, tax resisters’ long struggle has had a long-lasting impact on the architecture of federal taxation in the United States. Public disclosure of tax returns disappeared in the 1930s, and it comes as no surprise that secrecy and tax evasion have come to the fore since the 1980s. Graduated tax rates have been reduced from their peak after World War II, and the impact of income transfer from one class to another has been limited. If they had failed “to “exterminate,” as they put it in the 1990s, the progressive structure of federal taxation--the federal income tax still generated more than 55%  percent of annual receipts--tax resisters had been able to undermine the very notion of social solidarity. From the attacks on “welfare queens” by Ronald Reagan to the fascination with private goods and ownership, such neoliberal ideology instilled its vision not only in the United States, but also in the rest of the world.

Conflicting views on taxation were in evidence at the very beginning of the Republic. In a famous letter sent to James Madison in 1785, Thomas Jefferson expressed his belief in progressive taxation and was all the more willing “to tax the higher portions or property in geometrical progression as they rise.” In his second inaugural address, delivered on March 4, 1805, Jefferson changed his mind and was pleased to present his fellow Americans with an exceptional and limited system of federal taxation. He promised that it would be “the pleasure and pride of an American to ask, what farmer, what mechanic, what laborer ever sees a tax-gatherer of the United States?” Americans today live in a tax world that reflects the antagonistic view of the man from Monticello: a progressive system of taxation with anti-tax impulses defended by white, conservative, middle-class, and rich businessmen. As debts and taxes hold center stage in the Western world in the early twenty-first century, and the shutdown of the federal government continues to loom large in the United States, Americans will soon have to choose between these two traditions to implement what James Madison called a “well digested system of internal revenue.” The struggle is only beginning.