Mark D. Steinberg is Professor of History at the University of Illinois at Urbana-Champaign. He is the author or editor of books on Russian popular culture, working-class poetry, the 1917 revolution, religion, and emotions. His most recent books are Petersburg Fin-de-Siecle (Yale University Press, 2011) and the eighth edition of A History of Russia, with the late Nicholas Riasanovsky, published by Oxford University Press in 2010. He is currently writing a history of the Russian Revolution.

Contrary to those who believe that Vladimir Putin’s political world is a Machiavellian one of cynical “masks and poses, colorful but empty, with little at its core but power for power’s sake and the accumulation of vast wealth,” Putin often speaks quite openly of his motives and values—and opinion polls suggest he is strongly in sync with widespread popular sentiments. A good illustration is his impassioned speech on March 18 to a joint session of the Russian parliament about Crimea’s secession and union with Russia (an English translation is also available on the Kremlin’s website). The history of Russia as a nation and an empire are key themes:

“In Crimea, literally everything is imbued with our common history and pride. Here is ancient Chersonesus, where the holy Prince Vladimir was baptized. His spiritual feat of turning to Orthodoxy predetermined the shared cultural, moral, and civilizational foundation that unites the peoples of Russia, Ukraine, and Belarus. In Crimea are the graves of Russian soldiers, whose bravery brought Crimea in 1783 under Russian rule. Crimea is also Sevastopol, a city of legends and of great destinies, a fortress city, and birthplace of the Russian Black Sea fleet. Crimea is Balaklava and Kerch, Malakhov Kurgan and Sapun Ridge [major battle sites during the Crimean War and World War II]. Each one of these places is sacred for us, symbols of Russian military glory and unprecedented valor.”

No less revealing is his reflection on the relationships uniting the diverse peoples of Russia.

“Crimea is a unique fusion of the cultures and traditions of various peoples. In this, it resembles Russia as a whole, where over the centuries not a single ethnic group has disappeared. Russians and Ukrainians, Crimean Tatars, and representatives of other nationalities have lived and worked side by side in Crimea, each retaining their own distinct identity, tradition, language, and faith.”

How Russians have often understood their history as an “empire” (though the word is no longer favored) pervades these words and Putin’s thinking.

Try to figure out Putin’s mind—getting “a sense of his soul,” as George W. Bush famously thought he had seen after meeting Putin in 2001—has long been a political preoccupation, and has become especially urgent since the events in Crimea in March. Until now, most commentators viewed Putin as a rational and potentially constructive “partner” in international affairs. Even the growing crackdown on civil society and dissidence, though much criticized, did not undermine this belief. Russia’s annexation of Crimea shattered this confidence. German chancellor Angela Merkel declared that Putin seemed to be living “in another world.” Influential commentators in the U.S. declared that these events unmasked the real Putin, destroying any “illusions” that might have remained (Obama’s former national security advisor, Tom Donilon), revealing a revanchist desire “to re-establish Russian hegemony within the space of the former Soviet Union” (former U.S. ambassador to the U.N., John Bolton) by a “cynical,” power-hungry, “neo-Soviet” despot seeking to reclaim “the Soviet/Russian empire” (Matthew Kaminski of The Wall Street Journal). A less radical reassessment, but with roughly the same conclusion, is President Obama’s argument that Putin “wants to, in some fashion, reverse…or make up for” the “loss of the Soviet Union.” In this light, the key question becomes “how to stop Putin?”

History haunts arguments about what Putin thinks, how much further he might go, and what should be done. Some commentators focus on how Putin sees himself in history. The Republican chairman of the U.S. House of Representative’s Intelligence Committee, Mike Rogers, told Meet the Press that “Mr. Putin…goes to bed at night thinking of Peter the Great and he wakes up thinking of Stalin.” The logical conclusion is that if we do not stop Putin “he is going to continue to take territory to fulfill what he believes is rightfully Russia.” Others think of historical analogies. The former U.S. National Security Advisor Zbigniew Brzezinski, for example, writing in The Washington Post, described Putin as “a partially comical imitation of Mussolini and a more menacing reminder of Hitler,” making the Crimea annexation, if West does not act, “similar to the two phases of Hitler’s seizure of the Sudetenland after Munich in 1938 and the final occupation of Prague and Czechoslovakia in early 1939.” Echoing these interpretations are scores of satirical images of Putin as Stalin and Hitler that have appeared at demonstrations and in social media (images of Putin as Peter the Great, more common once, are seen as too flattering now): 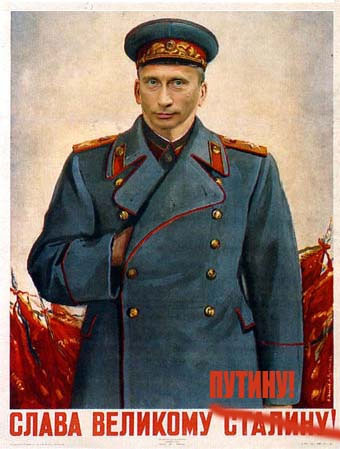 “Glory to the Great Stalin Putin!” 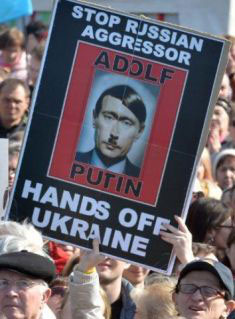 Poster at a demonstration in Kiev, March 2014

Putin himself has a lot to say about history in his March 18 speech. He points, as he often has, to the recent history of humiliation and insults suffered by Russia at the hands of “our western partners” who treat Russia not as “an independent, active participant in international affairs,” with “its own national interests that need to be taken into account and respected,” but as a backward or dangerous nation to dismiss and “contain.” Worse, the Western powers seem to believe in their own “chosenness and exceptionalism, that they can decide the fate of the world, that they alone are always right.” Rulers since Peter the Great have been fighting for Russia to be respected and included, and generally along the same two fronts: proving that Russia deserves equal membership in the community of “civilized” nations through modernizing and Europeanizing reforms, and winning recognition through demonstrations of political and military might, “glory and valor” (in Putin’s phrase). That Russia was famously disgraced during the original Crimean War, revealing levels of economic and military backwardness that inspired a massive program of reform, and that Western commentators now are expressing surprised admiration at the advances in technique and command seen among the Russian army since it was last seen in the field in Georgia, is not only surely gratifying to Putin (who has made military modernization a priority) but part of an important story about nation and history.

Putin also has a lot to say about empire. In the nineteenth century, a theme in Russian thinking about empire was that Russians rule the diversity of its peoples not with self-interest and greed, like European colonialists, but with true Christian love, bringing their subjects “happiness and abundance,” in Michael Pogodin’s words. As Nicholas Danilevsky put it in 1871, Russia’s empire was “not built on the bones of trampled nations.” The Soviet version of this imperial utopianism was the famous “friendship of peoples” (druzhba narodov) of the USSR. Putin, we see, echoes this ideal. He also directs it against ethnic nationalisms that suppress minorities (above all, Russian speakers in Ukraine). Hence his warnings about the role of “nationalists, neo-Nazis, Russophobes, and anti-Semites” in the Ukrainian revolution, and his declaration that Crimea under Russian rule would have “three equal state languages: Russian, Ukrainian, and Crimean Tatar,” in deliberate contrast to the decree of the post-Yanukovych Ukrainian parliament that Ukrainian would be the only official language of the country (later repealed).

Of course, the Russian empire and the Soviet Union were not harmonious multicultural paradises, nor is the Russian Federation, but the ideal is still an influence in Russian thinking and policy. At the same time, Putin contradicts this simple vision in worrisome ways. A good example is how he wavers in his March speech between defining Ukrainians as a separate “people” (narod, which also means “nation”) or as part of a larger Russian nation. Until the twentieth century, very few Russians believed that Ukrainians were a nation with their own history and language, and many still question this. Putin works both sides of this argument. On the one hand, he expresses great respect for the “fraternal Ukrainian people [narod],” their “national feelings,” and “the territorial integrity of the Ukrainian state.” On the other hand, he argues that what has been happening in Ukraine “pains our hearts” because “we are not simply close neighbors but, as I have said many times already, we are truly one people [narod]. Kiev is the mother of Russian [russkie] cities. Ancient Rus is our common source and we cannot live without each other.”

Putin’s frequent use of the ethno-national term russkii for “Russian,” rather than the more political term rossiiskii, which includes everyone and anything under the Russian state, is important. Even more ominous are Putin’s suggestions about where such an understanding of history should lead. Reminding “Europeans, and especially Germans,” about how Russia “unequivocally supported the sincere, inexorable aspirations of the Germans for national unity,” he expects the West to “support the aspirations of the Russian [russkii] world, of historical Russia, to restore unity.” This suggests a vision, shaped by views of history, that goes beyond protecting minority Russian speakers in the “near-abroad.”

Putinism often tries to blend contradictory ideals—freedom and order, individual rights and the needs of state, multiethnic diversity and national unity. Dismissing these complexities as cynical masks does not help us develop reasoned responses to Putin. Most important, it does not help people in Russia working for greater freedom, rights, and justice, who are marginalized (and often repressed) when Russia feels under siege. “We have every reason to argue,” he warned in his March speech, “that the infamous policy of containing Russia, which was pursued in the 18th, 19th, and 20th centuries, continues today. They are constantly trying to sweep us into a corner.” Of course, Putin is not wrong to speak of Western arrogance toward Russia (though he is hardly a model of respect for international norms) nor to warn of the dangers of intolerant ethnic nationalism (though he looks the other way at Russia’s own “nationalists, neo-Nazis, and anti-Semites”). That he can be hypocritical and cynical does not mean his thinking and feelings are “empty,” much less that he has lost touch with reality or with the views of most Russians.