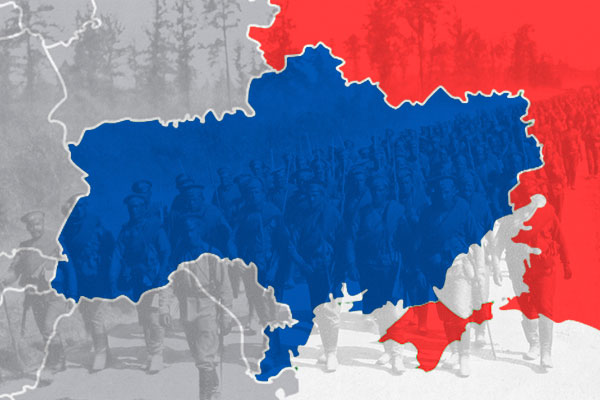 This year marks the centennial of the beginning of World War I. Some observers believe we humans are close to beginning another war—in Ukraine. Historian Stephen Cohen, a long-time critic of U.S. policy toward post-Soviet Russia, has stated, “I think that we are three steps from war with Russia, two steps from a Cuban missile crisis.” Perhaps Cohen is being too alarmist. A hundred years ago, however, when in late June Gavrilo Princip, a Bosnian of Serbian nationality, assassinated the Austrian archduke Franz Ferdinand, many Europeans did not think it would lead to war. But it did.

Soon before the Cuban missile crisis, which President Kennedy estimated had a one-half to one-third chance of leading to a Soviet-U.S. war, he benefitted from reading about the folly of starting WWI. According to Robert Kennedy in his book Thirteen Days, “A short time before, he [the president] had read Barbara Tuchman's book The Guns of August, and he talked about the miscalculations of the Germans, the Russians, the Austrians, the French and the British. They somehow seemed to tumble into war, he said, through stupidity, individual idiosyncrasies, misunderstandings, and personal complexes of inferiority and grandeur.” Although some of his military advisors urged the bombing of Soviet missile installations in Cuba, the president took the less risky step of imposing a naval blockade. War was averted.

When we look back at the origins of WWI, we do indeed see all the stupidities and complexes referred to by President Kennedy. Yet, all of the European powers who entered the war had a reason for doing so. Austria-Hungary issued an ultimatum to Serbia because it had good reason to think the Serbian government was implicated in the crime, and that the extreme Serbian nationalism it represented posed a major threat to its empire, which contained more Slavs, including Bosnian Serbs, than either Austrians or Hungarians. The Germans backed the Austrians because Austria-Hungary was its only reliable ally in Europe. The Russians backed the Serbians because Serbia was its last bastion of influence in the Balkans and they feared that the harsh Austrian ultimatum would end that role and leave their western border, north and south, dominated by Germany and the Germanic Austrians. France supported its ally Russia partly because it wished to regain the provinces of Alsace and Lorraine, lost to Germany in the Franco-Prussian War of 1870-71. Great Britain entered the war because of an increasing industrial and military competition with Germany and because the latter invaded neutral Belgium, just across the English Channel from Britain. And Germany attacked Belgium, en route to France, because of a war plan that aimed to minimize the consequences of having to fight a two-front war against France and the Russian Empire.

Historians ever since have debated the degree of “war guilt” that should be attributed to each of the powers. But was the war worth it for any of them, even the European victors? The Russian Emperor, Nicholas II, who ordered full mobilization against the Germans and Austrians in 1914, ended up losing his life in 1918 because the communists responsible had come to power the previous year, partly because of the war. And the Russian Empire, despite being on the winning side, collapsed, and the new Soviet Russia was considerably smaller until WWII brought new gains. It’s true that France did regain Alsace-Lorraine, but was it worth the loss of 3 of every 10 French men between the ages of 18 and 28?

Are wars ever worth all the sufferings that flow from them like blood from dying soldiers? Perhaps some are. Perhaps only war, sooner or later, could have stopped Hitler’s evil ambitions from succeeding. But most wars hardly seem worth the cost, especially in lives, but also in all the other losses, of limbs, of property, of money, of psychological well-being.

Too often we historians and students of history cite the statistics of killed and wounded without pausing to contemplate all the human tragedies implied by them. In his novel Black Dogs, the British novelist Ian McEwan wrote about one of his characters:

He was struck by the recently concluded war [World War II] not as a historical, geopolitical fact but as a multiplicity, a near-infinity of private sorrows, as a boundless grief minutely subdivided without diminishment among individuals who covered the continent like dust. . . . For the first time he sensed the scale of the catastrophe in terms of feeling; all those unique and solitary deaths, all that consequent sorrow, unique and solitary too, which had no place in conferences, headlines, history, and which had quietly retired to houses, kitchens, unshared beds, and anguished memories.

We should keep this passage in mind when thinking of the costs of war.

During the last two months, I have been following closely the crisis events relating to Russia, Crimea, and Ukraine (and even written a few HNN essays about them). The crisis continues because of the large number of Russian troops along the Ukrainian borders, and the violence and skirmishing going on in eastern Ukraine between ethnic Russians and Ukrainians. The situation is terribly complex. The best single source for me and many other Russian scholars is the daily newsletter we receive from Johnson’s Russia List. It offers a compilation of articles, essays, and other pieces, recently focusing most on the ongoing crisis. In addition to the opinions of many Russian experts, it includes numerous newspaper and magazine articles from both within and from outside of Russia. Cacophony rather than consensus summarizes the thinking about the responsibility for the crisis and how it should be handled.

Among the many experts it cites is Stephen Cohen, who I’ve quoted above. He places considerable blame for the crisis on the relentless expansion of NATO to the very borders of Russia, and asks how we would regard an anti-American alliance expanding to Canada or Mexico. A fair question, considering how we reacted to Soviet missiles in Cuba during 1962, and how after a Russian statement in early 2004 that it would not tolerate NATO military forces in the three former Baltic republics of Estonia, Latvia, and Lithuania, NATO added those three new members. Cohen also believes that the Russian takeover of Crimea and interference in Ukraine stem from Vladimir Putin’s fears of NATO’s desire to also add Ukraine to its members.

Some other experts (and non-experts) appearing on Johnson’s list and other media sources place the entire blame on Putin’s aggression, whether stemming from insecurities, a desire to restore Russian glory, or some other cause. For the average concerned person without privilege to any government information, numerous unanswered questions exist. Why did Russian annex Crimea? What motivates Putin in his Ukrainian polices? Does he intend to send troops into eastern Ukraine or is he just trying to exert great pressure on Ukraine to insure that it remains more under Russian than Western influence? To what extent has the Russian government fomented discontent among ethnic Russians living in Ukraine? How legitimate was the Ukrainian revolution in February 2014 that overthrew pro-Russian President Viktor Yanukovych and established a new government? How democratic was the revolution? How involved were Western powers in aiding his overthrow?

But whatever the crisis’s causes, however the fault should be apportioned, it remains dangerous, and some sort of future violent conflict or conflicts remain a real possibility. Furthermore, all of these unanswered questions should make us pause before we clamor for any military actions challenging Russia. A dose of humility, acknowledging that we don’t have all the answers, is often helpful in times of crisis.

History can only tell us so much, and it is often applied wrongly. The horrors of WWI taught many people in Britain and France to be extremely cautious about future military buildups and ever going to war again. This caution contributed to their appeasement of Hitler until 1939. But confronting him earlier, e.g., in 1936 after German troops remilitarized the Rhineland, might have saved much bloodshed. Ever since, however, this lesson—appeasement does not pay—has been repeated ad nauseam. But often it does not fit the case, e.g., in regard to our involvement in Vietnam in the 1960s and Iraq in 2003. What President Kennedy learned from Tuchman’s The Guns of August, however, was valuable: proceed cautiously, avoid “misunderstandings, and personal complexes of inferiority and grandeur,” seek a peaceful solution, and be willing to make some concessions—in exchange for the Soviet promise to dismantle its missile sites in Cuba and return its missiles to the USSR, Kennedy promised not to attack Cuba, and (unofficially) remove U.S. missiles from Turkey in four or five months.

Attempting to understand what has motivated Putin’s action during the past two months should not mean justifying them. In my view, any Russian actions stirring up trouble and chaos in Ukrainian territory, including its former Crimean area, is unacceptable. To say that the United States has sometimes done this in foreign countries or that we have often been insensitive to Russian national security concerns is no excuse. Countries abutting a major power’s borders, whether those of Russia or the United States, also have their security concerns and the right to join whatever alliances they wish. Attempting to understand Russian security concerns, however, is important. It can help us better arrive at a diplomatic solution that both Russia and Ukraine will accept.

During this centenary of the origins of WWI and while dealing with the continuing Ukrainian crisis, I would hope that we remember a few points:

1) Historians are still debating, a hundred years later how to apportion the blame for starting WWI. (My own view is that there is plenty of blame to go around.)

3) War is not some sort of gamesmanship, and it often has numerous unforeseen consequences and brings about innumerable tragedies.

4) Diplomatic solutions, unless they lead to greater future suffering (as did the appeasing Munich Conference of 1938), are almost always preferable to war.