What Do You Call It When a Big Country Takes a Chunk of a Small One? Greed (And We Should Know)

David Lee McMullen is on the history faculty at the University of South Florida St. Petersburg.  He blogs as Rambling Historian (http://ramblinghistorian.blogspot.com/) 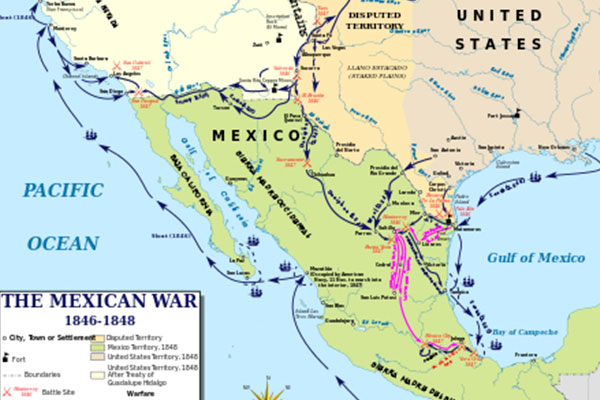 A greedy nation amasses a large military force on the border with its neighbor, a young nation that only a few years earlier threw off the shackles of an empire to declare its independence.  The intent is a massive land grab, pure and simple.

Some might think I am referring to Russia and the Ukraine in 2014, or perhaps Germany and Poland in 1939.  I am not.  I am talking about the United States and Mexico in 1846, a war that ultimately allowed the U.S. to annex most of the modern Southwest.

It seems odd, given all the commentary about the current crisis, that no one has made the connection, because the Mexican War is a harsh reminder that the United States has been guilty of the same type of aggression.

Mexico won its independence from Spain in the 1820’s, after a decade of bloody fighting.  They established a republic, modeled on the U.S. and based in part on the U.S. Constitution.  They created a central government and a nation of states, even naming their new country Estados Unidos Mexicanos – the United States of Mexico.

To protect the central Mexican states from Comanche attacks, and to forestall the expansionism of its northern neighbor, Mexico invited settlers to come to what is now modern Texas.  New settlers were offered large land grants in exchange for becoming Mexican citizens, respecting Mexico’s abolition of slavery and adopting the Catholic religion.

The offer was accepted by thousands of U.S southerners, many of them slave owners, who sought to expand slavery westward.  They accepted the land from Mexico, but failed to live up to their promises.  It was this group that rebelled against Mexico in the 1830’a and established the Republic of Texas.

After accepting Texas as a state, the U.S. sought to buy much of the modern Southwest.  Mexico declined our offer.  In response, the United States moved an Army south to the Rio Grande, into territory claimed by Mexico for the purpose of sparking a conflict. From Mexico’s perspective, it was an invasion.

The war that resulted lasted two years, and involved American forces who invaded central Mexico, capturing both the capital and the country’s major port, Veracruz.  In addition, the U.S. mounted naval and military operations in the Mexican territories of California and New Mexico. It was the first of many times during the next century and a half that the United States flexed its power against Mexico and other Latin American nations, openly or covertly.

When the Mexican War was finally over, the U.S. forced Mexico to surrender a vast amount of territory, land stretching from the Texas border to the Pacific Ocean.  As a result, relations between our two countries were poisoned for decades, something that can be seen today in the unequal partnership between our two nations.

Of course, there are differences between the Mexican War of the 1840’s and the current standoff between Russia and the Ukraine, including Russia’s long history of domination in the region and the large number of ethnic Russians living in the Ukraine.  Yet the underlying issue is very much the same, a larger, more powerful nation using brute force to take what it wants, leaving its weaker neighbor to nurse its wounds with little or no recourse but to accept its fate.

Despite our best diplomatic efforts, Russia has annexed Crimea and now is threatening to take control of the eastern half of Ukraine.  Military action by the U.S. or NATO would be unwise.    Remember, it was Germany’s invasion of Poland in 1939 that sparked the start of World War II in Europe, forcing Britain and France to abandon their diplomatic efforts and declare war on Germany.

The reality of the current crisis is that there is little the United States can do to resolve it without risking war.  As we watch the events unfold, perhaps we should recognize that America does not always hold the moral high ground.