Are Historians Overestimating the Impact of Civil War Deaths on Americans of the 19th Century?

Nicholas Marshall is an associate professor of history at Marist College. This article was adapted from Professor Marshall’s article “The Great Exaggeration: Death and the Civil War,” published in the Journal of the Civil War Era 4 (March, 2014). 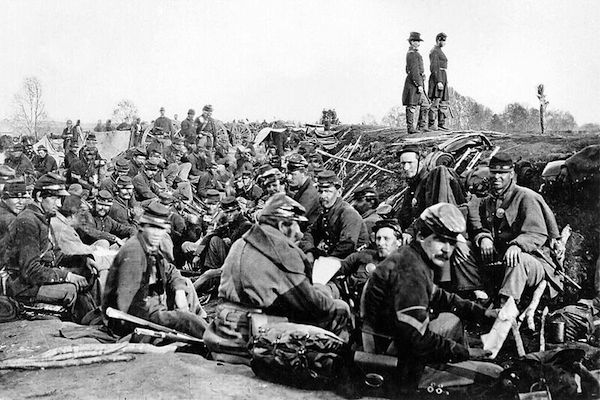 What did the Civil War’s death toll mean to those who lived through it? We are now told that wartime deaths were unprecedented and overwhelming, and constituted one of the fundamental experiences for the wartime generation. But is this really true?

In recent years, statistical descriptions have been used by historians — including renowned scholars such as James McPherson, Eric Foner and Drew Gilpin Faust, but also celebrated filmmakers Ken and Ric Burns, among many – to drive home a characterization of the war based on the scale of death. They may be found across the range of media regarding the war, in films, museums, popular histories, scholarly treatises and lectures.

One such statistic is that the number of soldiers’ deaths in the Civil War – approximately 750,000 – was greater than the total number suffered in all other American wars combined. A second point makes use of the first figure: If one calculates the proportion of the total population who died while in military service during the war, and applies this percentage to present-day population figures, the equivalent number of deaths in the 21st century would reach above 7 million. This is a staggering figure that suggests that the Civil War generation made almost inconceivable sacrifices.

But while factually correct, the statistics work to exaggerate the impact of the war. At its essence, the use of these statistics is designed to provide perspective, a laudatory goal. It is supposed to allow those of us looking back on the war to get a clear sense of the emotional texture of the time. The problem is that doing so violates one of the central codes of historical analysis: avoid presentism.

Instead of putting us in the minds of those who experienced the Civil War, it conjures up significance by equating disparate eras. And it is not enough simply to speak about numbers. To understand how deaths affect a culture, it is essential to examine the meaning ascribed to them beyond the statistics. In the case of the Civil War, historians have not adequately taken into account the context of death and dying in the period.

Solid scholarly work exists on the central importance of death in antebellum America and the ordinary experience of death during the war, but Civil War historians have tended to sidestep this literature in order to claim the war years as exceptional. They have also underplayed the significance of the demographic realities that Americans faced before, during, and after the war. These reveal a society constantly coping with large-scale mortality. Americans throughout the period were lucky if they survived into middle age, and they recognized that life was more fragile than we do today.

Evidence for the extraordinary importance of affliction in the lives of antebellum Americans may be found in nearly any historical source from the period. Newspapers almost always included both poems about the death of loved ones and advertisements for nostrums claiming to cure a variety of ailments. Health became an important focus of advice manuals, and fiction frequently made use of death and sickness as plot devices. In many cases, private correspondence concerned matters of health to the exclusion of most other topics, and diaries overflowed withdescriptions of suffering.

Given these circumstances, it is important to remember that approximately two-thirds of the deaths of soldiers came as a result of disease, rather than on the battlefield. Looking back from today, these numbers are difficult to fathom, and the image conjured by them is of horrendously unsanitary conditions in military camps. After all, these deathsseem to be as much a product of war as those that resulted from wounds: soldiers in camp were there to fight the war and they died because the conditions were necessary to conduct field operations with a massive army.

But this is a present-minded understanding of the circumstances, because it ignores the epic antebellum confrontation with disease. If we work from an assumption that deaths from disease were not viewed at the time as war casualties, but rather as a continuation of prewar circumstances, instead of 750,000 casualties faced by Civil War-era Americans, we are left with 250,000. If we divide this figure by the four years of war, we have a crude estimate of 62,500 battlefield deaths per year.

But even this figure requires context to understand its significance. It is important to keep in mind that death rates were tremendously variable in the period, even within relatively stable locales, because of the unpredictable nature of contagious disease. Some areas reported rates that varied from below 2 percent up to 6 percent. A conservative estimate of a 2 percent death rate for 1860 would have meant about 629,000 deaths that year for the nation as a whole, while a 3 percent rate would have resulted in 943,000 deaths (today’s rate is consistently below 0.8 percent). The additional battlefield deaths in the war would thus represent an increase of between 7 and 10 percent over the normal rates. Significant, but hardly catastrophic.

If we look at changes in estimated death rates from Massachusetts that include antebellum, bellum and post-bellum periods, we notice that these Civil War variations had contemporary parallels. The largest single change in the 19th century in Massachusetts (including the Civil War years) occurred between 1871 and 1872, a 22 percent increase. However, the greatest change in the death rate between single years for Chicago between 1847 and 1864 was an astounding 296 percent. The Civil War additions, therefore, would not be out of line with normal variations before and after the war.

The experience with epidemic sickness and death in other historical moments should also remind us that Americans have been much more blasé about death from sickness than they are today. During the global flu epidemic at the end of World War I as many as 100 million worldwide, including 600,000 in the United States (roughly five times the number of American casualties in World War I and approaching the total number of deaths in the Civil War), perished over the course of just a few months. In addition, this was an unusual strain of influenza that killed mainly the healthiest cohort of the population (those in their 20s and 30s) through a violent immune response. If any event should have triggered re-evaluation of the nation’s approach to death (based solely on changes in incidence and scale, as Civil War historians often calculate), this would be it.

Yet one historian’s book on the subject is titled “America’s Forgotten Pandemic,” and he spends a significant portion of the book trying to explain why the epidemic seemed to disappear from public consciousness so soon after it waned. The answer, in part, is that well into the 20th century Americans viewed disease — and the death that came with it — as a constant, as something that had to be dealt with as part of everyday existence.

This is not to say that deaths in the war were not emotionally wrenching, or that they did not raise any number of new issues for Americans. The antebellum evidence shows that within a sentimentalized culture, death was indeedan important and profoundly disturbing event. Deaths in the war were also viewed in this way, and the trauma associated with them was real, heartfelt and an added burden.

The demographic picture that spans the war years, however, undermines the idea that the magnitude of death in the war necessarily forced Americans to reassess the implications of the carnage. Furthermore, because so many people died young in this era, the casualties would be interpreted very differently than today. The sense of loss that 21st century Americans associate with the relatively rare death of a young person was not the standard mode of response then.

Moreover, the connection of the deaths in the war to a greater cause imbued them with a meaning that should not be overlooked, and that may be seen as an improvement over the struggle to make sense of the vast numbers of dead during the antebellum period. In some way, the significance ascribed to deaths while in the service of protecting the Union or Confederacy obviated the antebellum need for understanding God’s will when those in the prime of life were cut down. For family members of soldiers, the interpretation was easily found. As a Minnesotan soldier named Patrick Taylor noted in a letter to his parents upon the death of his brother (the two fought side by side at Gettysburg), “Isaac has not fallen in vain. What though one of your six soldiers has fallen on the altar of our country. ’Tis a glorious death; better die free than live slaves.’”

The evidence from the period makes clear that historians need to re-evaluate the way we have come to understand the carnage of the Civil War. The war added to an existing demographic and cultural problem rather than creating an entirely new one. Given this milieu, the nearly ubiquitous use by historians of a set of factually correct, yet misleading, statistics needs rethinking. To make a case for the bloodiness of the war in this manner says more about how we interpret these figures today — and the uses we make of them — than about the way Americans actually experienced the wrenching conflict.