These Are the Guys Who Invented Modern Espionage

Giles Milton is the author of "Russian Roulette: How British Spies Thwarted Lenin’s Plot for Global Revolution," published by Bloomsbury. 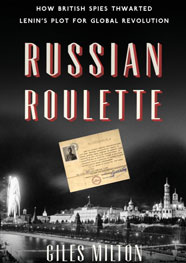 On a bitterly cold evening in November 1918, a heavily disguised figure could be seen slipping across the border between Finland and Russia.

Joseph Afirenko looked every inch the Russian revolutionary and was carrying papers that identified himself as a member of Lenin’s secret police. In fact, he was no such thing. His real name was Paul Dukes and he was a spy working for the British secret service.

The Secret Intelligence Service (today’s MI6) had been established in 1909, but it was to come into its own in the aftermath of the 1917 Russian Revolution that swept Lenin’s Bolsheviks to power. Lenin had made it clear that his regime was avowedly anti-democratic. He had also declared his intention of bringing down British India, the jewel in the crown of the British Empire. London urgently needed to know whether or not he was serious.

Henceforth, he wore a wooden leg that was used to theatrical effect when he interviewed potential candidates for espionage. He would reach for his letter-knife, raise it high above his head and then plunge it deep into his prosthetic limb. If his interviewee winced, he would smile and say, ‘Well I’m afraid you won’t do.’

Within weeks of the Russian Revolution he had started to infiltrate agents into the country - Paul Dukes, George Hill, Sidney Reilly and the journalist Arthur Ransome.

It was dangerous work and required them to live undercover for many months on end. Paul Dukes created four different identities for himself and had an array of fake identity papers. Over the next six months, he was to prove an expert at living undercover in extremely hostile conditions.

Unlike today’s agents and whistleblowers, who can leak thousands of secret documents from a single computer, Dukes had to gather his information by stealth. He was a pioneer – arguably the first professional spy of the modern age - and certainly the only agent ever to be knighted for services to espionage.

Dukes and his fellow agents were given very little training, yet they rapidly set up a network that was able to smuggle out of the country vast amounts of highly classified information.

One reason for their success was that they all spoke near-perfect Russian. Dukes had been brought up as a member of Britain’s large ex-patriot community living in pre-war St Petersburg. As such, he could pass himself off as a native Russian.

Sidney Reilly also spoke fluent Russian and had key contacts in Moscow who detested Lenin’s new regime. Posing as loyal Bolsheviks, these contacts had secured senior positions inside the new government. This enabled them to acquire highly sensitive documents that were then handed over to the British spies, who copied them onto special paper using secret ink made from semen.

The effectiveness of Mansfield Cumming’s agents was dependent on them being adaptable and innovative. It was one thing to make copies of top-secret documents, quite another to smuggle the coded copies of these documents out of the country.

George Hill was instrumental in establishing a professional courier network that stretched right across northern Russia. Using the services of loyal anti-Bolsheviks, he was able to get documents couriered from Moscow to Stockholm (and thence to London) in a matter of days.

Hill’s next step was to set up a network of 10 secure houses in and around Moscow. He also used a well-known brothel as a safe place to meet with his couriers. ‘What was more natural,’ he wrote, ‘than that unknown men should constantly be coming and going in and out of this flat.’

What Dukes, Hill and Reilly achieved in the course of 1918 and 1919 was little short of remarkable. Not only did they infiltrate Lenin’s inner circle, but they also managed to eavesdrop on the Cheka and the Communist International, the organization charged with spreading the gospel of worldwide revolution.

The spies were aided by a second group of British agents operating out of Tashkent, in Bolshevik-controlled Central Asia. These men scored the singular coup of hacking into the Soviet wireless communications network. By the spring of 1919, they were intercepting virtually all the telegrams passing between Lenin, Trotsky and the Tashkent-based Red Army commanders involved in planning the invasion of British India. (The intercepts still exist: they are today housed in the intelligence archives of British India.)

Information has always been the key to espionage. Armed with a mass of highly sensitive information, British ministers were able to hold Lenin’s new regime to ransom. In a deft piece of diplomacy, they were able to expose, unpick and neutralize Lenin’s designs on British India.

The work of men like Paul Dukes and George Hill convinced the British government that a small group of undercover agents could achieve more in a month than an entire army might achieve in a year.

Winston Churchill considered their work so important that espionage was henceforth to become a key component in formulating foreign policy. Churchill was also quick to see the value of intercepted communications, saying they were more useful “as a means of forming a true judgement of public policy than any other source of knowledge at the disposal of the State.”

The work of Mansfield Cumming’s men inside Soviet Russia not only neutralized the threat posed by Lenin’s Bolsheviks, but also guaranteed the future of MI6.

The age of modern, professional espionage was born.