Review of Bruce Dancis’s “Resister: A Story of Protest and Prison During the Vietnam War”

Murray Polner a, regular book reviewer for HNN, wrote “No Victory Parades: The Return of the Vietnam Veteran” and co-authored, with Jim O’Grady, “Disarmed and Dangerous,” a biography of Daniel and Philip Berrigan.” 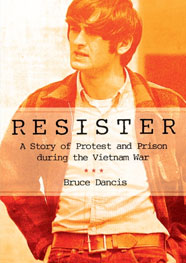 “On December 14, 1966, at the age of eighteen, I stood before a crowd of three hundred people at Cornell University, read a statement denouncing the war and the draft, and tore my draft card unto four pieces.” Bruce Dancis, a college freshman, then dramatically walked to a mailbox and sent the mutilated card to his draft board. He was the first Cornell student to do so. “I made a stand against the war and the draft. I became part of a tiny minority of young men ---an estimated three thousand—who went to federal prison instead.”

Resister, Bruce Dancis’s absorbing portrayal of the tumultuous sixties from his vantage point as leader of Cornell’s Student for a Democratic Society, describes what it was like to challenge the world’s most powerful nation in the midst of a war that saw millions of Asians and 58,000 U.S. troops die, a failed war for which no-one at the highest level of our government has ever been held accountable.

Dancis and anti-war opponents like him were widely praised but also damned. Inspired by hatred for the war, the draft, black liberation and sexual freedom, the emergence of the New Left and Catholic Left and the possibilities it presented seemed a golden opportunity to seriously change the country’s direction. Many of their opponents believed the SDS and similar rebel groups symbolized the decline of order, stability, tolerance and civil patriotism, a frontal assault on values where people knew their place and politics stopped at the water’s edge.

Dancis was a Jewish kid from the Bronx and schooled at the Ethical Culture Society in Manhattan. His father had been a WWII conscientious objector and both parents, politically active, were ardent anti-Communists. By the time he arrived in Ithaca in 1966, the idea of student power was already alive on some campuses. But the more the war expanded, the more dead and wounded soldiers, the more the government fought the protestors, the more did Dancis become active with Cornell’s SDS branch. Kirkpatrick Sale’s definitive history, SDS, recognized Dancis’s role. “Inspired by SDSer Bruce Dancis’ draft card destruction,” Sale wrote, the SDS called for a controversial “burn-in” in Central Park's Sheep Meadow for April 15, 1967. Sale went on to depict the event as “an important symbolic moment for the anti-draft movement [because] combined with the beginnings of the West Coast group called Resistance, which was launched this very same day with a call for a mass turn-in of draft cards in the fall, this was to reverberate throughout ivied halls around the country.” The New York Times’ Tom Wicker went further, suggesting that, if the U.S. “had to prosecute 100,000 Americans in order to maintain its authority,” it would be more difficult to pursue the war since “It would then be faced not with dissent, but with civil disobedience on a scale amounting to revolt.”

By August 1968 Cornell had become a center of college antiwar activities. Its SDS chapter was the largest in the country, Many of its members were veterans of the “We Won’t Go” movement and the Bobby Kennedy and Eugene McCarthy presidential campaigns. On campus Dancis befriended economic professor Douglas Dowd and Re. Dan Berrigan and other sympathetic staff members. Eager to become nationally involved, he left school for a year and when he returned he learned of new student demands by women and African Americans insisting on full equality.

Cornell’s embattled administration found itself torn between student rebels and their opponents on an off campus. Many faculty members, including antiwar liberals, thought the radicals had gone too far in threatening academic freedom. Dancis ignores how their often strident demands may have harmed the university and also their standing with many Americans who otherwise shared their political views. Nor does he come to grips with the bizarre and unprecedented occupation of Straight Hall by some one hundred African American students. A cross was burned outside the building amid charges and counter-charges. White frat men broke into Straight Hall, and the occupiers began arming themselves. Wisely, the administration refrained from calling in local and state police and the National Guard. As one school official told alumni< “Before you judge us, picture a nice big headline on Monday morning---six killed, 30 injured in gun battle at Cornell.”

When the students finally evacuated Straight Hall they marched out carrying an assortment of weapons, much to the horror of many witnesses. “It was a stunning moment,” Dancis explains, “as it graphically illustrated the precariousness of the situation and the ongoing potential for violence.” (Weapons on college campuses were highly unusual, at least until May 1970, when National Guardsmen ---most exempt from active military duty and therefore Vietnam---killed four Kent State students and wounded none others). As he watched the departing occupiers, Dancis apparently had second thoughts. “I, too, was cheering out of a sense of solidarity.” Yet he was uneasy and added, sensibly, “I was also taken aback by the spectacle [and] I could not help also feeling that their action was excessive.”

Sentenced to prison for having shredded his draft card (the court rejected his pro bono lawyer’s argument that he had committed a crime of conscience) he was sent to the federal youth prison in Ashland, Kentucky, where several inmates, convicted of serious crimes, were astonished that he was jailed simply for tearing up a piece of paper. When finally released on parole after nineteen months, he applied to a college for admission and the last line of his application read, “I will be on parole and I do not want to go back to jail.” Indeed, the prison experience haunted him for years. “For more than a decade after I was released from Ashland, I was awakened by nightmares in which I found myself back in prison,” nightmares which returned when he started writing this book. He went on to work for sixteen years as the arts and entertainment editor of the Sacramento Bee and says he still believes in democratic socialism “where human needs take precedence over profits.”

In his epilogue Dancis asks “how successful was the movement?” Echoing Tom Wells’ conclusion in The War Within, he agrees that it played a “major role in restricting, de-escalating and ending the war.” Well, maybe. But as the losing war dragged on and more and more military coffins were shipped home to grieving families, influential and powerful centrist forces began turning against the war. But he’s right in including the dramatic role played by the Vietnam Veterans Against the War, whose members marched down Washington’s Pennsylvania Avenue and then threw away their medals, shocking some but energizing millions of others. And, of course, there was the young John Kerry, famously testifying before the Senate Foreign relations Committee in 1971, asking, “How do you ask a man to be the last man to die for a mistake?

Dancis and many in his like-minded allies once believed they could bring about permanent, serious and nonviolent change. But by 1973 and after, as the war wound down and draft calls ended, drugs, factionalism, disillusionment, violence and count-violence frustrated their dreams. America remained in the war business, in the ongoing Cold War, in Central America, the Balkans, Afghanistan and Iraq. All the same, without the Bruce Dancises who knows how long the Vietnam War might have gone on and how many more Americans and Asians would die.”

What draft-age resisters did best was to clog the draft boards and courts and in many other ways confront the government’s war machinery. They helped create the most important anti-war force in American history. They helped end the hated draft, whose existence whetted the appetite of our home front warriors. They were young and courageous, and took serious risks. Bruce Dancis’s gripping Resister does them justice.