This is part two of a three-part series distilling the thesis of Richard Striner’s new book, Woodrow Wilson and World War One: A Burden Too Great to Bear, published by Rowman & Littlefield in April 2014. (Click here for Part 1.) Mr. Striner is a professor of history at Washington College. His other books include Father Abraham: Lincoln’s Relentless Struggle to End Slavery and Lincoln’s Way: How Six Great Presidents Created American Power. 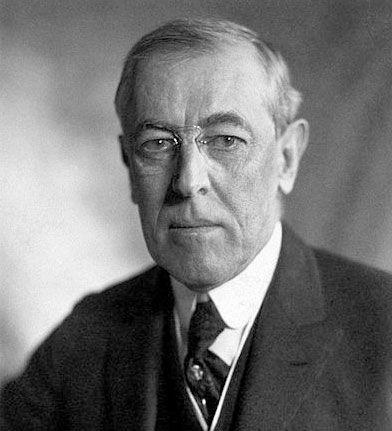 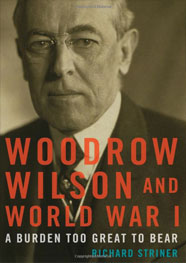 All through America’s active involvement in World War I — from the war declaration in April 1917 to the armistice in November 1918 — Woodrow Wilson’s presidential leadership was often egregious. His frequent failure to master or even to employ the most rudimentary forms of power orchestration amounted to strategic incompetence. The unhappy sequence of blunders that fed upon each other can be traced to the early months of 1917 when Wilson, to his credit, foresaw the dangers of a harsh peace settlement and spoke out accordingly.

In 1917, as German submarine warfare pushed the United States into war, Wilson made an important address to the United States Senate on the subject of war aims. He called for “peace without victory,” and warned of the dangerous consequences if a vindictive peace settlement should prompt the losing side to seek a rematch later on. This was one of Wilson’s better and more prescient moments.

But because of his previous delay in seeking preparedness legislation, he lacked one of the most powerful tools of leverage that might have been used to force agreement with the British and the French on a non-vindictive peace: the ability to furnish trained soldiers, ready for combat. For the central powers appeared to be winning in 1917. The Russian Revolution started early in the year and by the end of 1917, the Germans had effectively won on the eastern front. Moreover, the French army was disabled by the so-called “mutiny” of troops who would no longer follow orders for suicidal attacks. The allies needed troops and they needed them quickly. Wilson could not furnish them.

What he did possess, however, was financial leverage. The United States, through the sale of weapons and munitions, had become the arsenal of the allied powers, since the demands of total war were beyond their industrial and agricultural capabilities. Moreover, they were increasingly dependent on loans from the United States to finance the purchase of these war supplies. By April 1917, the collateral that they had been using to secure American loans would be gone. But Wilson possessed the power, through the treasury department and the Federal Reserve, to extend more credits to the allies. And if he had used this leverage to force an agreement on a non-vindictive peace before he went to Congress seeking the declaration of war, he might have succeeded in pre-committing the British and the French to “peace without victory.”

But he never even made the attempt — indeed, it appears that he never even thought of it. Instead, when the United States joined the allies, Wilson just gave them the financial assistance that they needed for free, no strings attached.

This sort of behavior was increasingly typical for Wilson: inattention to power orchestration, neglect of strategy, obliviousness to opportunities for leverage. Instead, Wilson succumbed increasingly to the illusion that noble ideals expressed in eloquent words would sway the hearts and minds of the people of the world in a manner which — when combined with the providence of God — would force the leaders of other nations to do the right thing.

The first high-level consultations between Wilson and his new allies took place at the behest of the British and the French, who sent delegations to Washington in April 1917. Wilson’s adviser, Col. House, requested copies of their pre-existing understandings of war aims and territorial settlements. The British foreign minister, Arthur Balfour, provided them. But in the opinion of Wilson scholar Arthur S. Link — editor of the Papers of Woodrow Wilson — Wilson never even bothered to read these treaties. Link observed that Wilson always marked up the documents that he read, but these copies of the secret treaties, carefully preserved within the Wilson papers, showed no sign that Wilson ever read them.

The war effort itself went badly during 1917. Wilson tapped General John J. Pershing to command the American Expeditionary Force, but he gave him complete autonomy — unlike war leaders such as Abraham Lincoln and Franklin D. Roosevelt, who supervised their generals closely and played an active role in formulating strategy. Wilson would pay heavily for this abdication in the following year. Moreover, the civilian-side mobilization ran into all sorts of logistical problems that became so severe by the end of 1917 that congressional leaders of both parties briefly discussed the possibility of appointing special commissioners to supersede the president for the purposes of war production planning.

Worst of all, Wilson, after declaring that the war should “make the world safe for democracy,” became complicit in one of the worst governmental assaults upon freedom of speech in American history, via the Espionage Act of 1917, and the Sedition Act of 1918.

In the autumn of 1917, as German victory approached on the eastern front, Wilson sent Col. House to discuss war aims with the British and the French. The timing could not have been worse: American troops had not taken part in any fighting and Gen. Pershing was completely noncommittal as to when they would be ready for battle. The British and the French knew that within a few months the Germans would be able to shift massive numbers of troops to the western front for the knock-out blow in France. They needed troops from the United States right away. Wilson refused to order Pershing to speed up his timetable. Not surprisingly, the British and the French refused to agree to the principle of a non-vindictive peace.

Unfazed, Wilson took their refusal as a mandate to act on his own. So in January 1918, with American influence at low ebb, he and House created his soon-to-be famous “Fourteen Points.” These principles for a peace settlement were composed by these two men in total secrecy. No members of Wilson’s cabinet were consulted, no members of Congress were consulted, no foreign heads of state or foreign ministers were consulted. Wilson, with House’s assistance, just set these principles forth in peremptory fashion.

At their worst, they were naïve. Point number one, for example, called for “open covenants of peace, openly arrived at, after which there shall be no private international understandings of any kind but diplomacy shall proceed always frankly and in the public view.” It was telling that this call for open deliberations had been developed by Wilson and House in secret, without any consultations with others. Wilson seemed to be oblivious to this element of hypocrisy, this gross inconsistency between his words and his deeds.

“Open covenants of peace” was of course an attractive ideal, at least in theory. But it was telling that Wilson never seemed to imagine the possibility of situations when secret understandings in a dangerous world might be the only way to save innocent lives and deflect malevolent force. It was also telling that Wilson seemed to believe that this call for an end to secret treaties would be easily enforceable. But secret understandings are in their very nature kept hidden, and, if successfully kept hidden, they will never be discovered by anyone. Perhaps this is also the time to mention Wilson’s aversion to the use of spies, which he considered dishonorable.

Point number two was “absolute freedom of navigation upon the seas.” Wilson would continue to insist upon “freedom of the seas” throughout 1918, notwithstanding the open opposition of the British, who for centuries had defended themselves through naval might and oceanic blockades.

Is this sufficient evidence of Wilson’s worsening myopia by 1918? If not, consider the fact that the idea of creating a League of Nations, the Fourteenth Point of Wilson’s manifesto, was supported by a great many influential people on both sides of the Atlantic. Again and again, such people reached out to Wilson in 1918 to offer their assistance.

For example, former President William Howard Taft was the head of an organization called the “League to Enforce Peace” or LEP. In March, Taft called upon Wilson at the White House to offer his help in bipartisan discussions on the nature of the League of Nations. Wilson refused, and in private correspondence he dismissed the former president and his colleagues as “butters-in” and “wool gatherers.” Similarly, when the British commissioned a study group to consider different options for the structure of a league of nations, Wilson dragged his feet for months before he responded to their overtures.

During the spring of 1918, the final German offensive in France was unleashed. The British leaders, David Lloyd George and Georges Clemenceau, were beside themselves with frustration and fury as Pershing committed only minimal numbers of American troops to battle and Wilson refused to order his commander to increase the American effort.

His mind kept drifting away from considerations of power politics. Instead, he preoccupied himself with utopian visions and dreamy ideals — ideals for the coming millennium to which his speeches were pointing the way. In his Fourteen Points address to the Senate, for instance, he said that the First World War would be nothing less than “the final and culminating war for human liberty.” On July 4, he called in a speech at Mount Vernon for “the destruction of every arbitrary power anywhere.”

At times, his impulsive utterances had a morbidly funny or tragi-comic quality, at least in hindsight. On May 27, in a speech before Congress, he declared that “politics is adjourned.” But on October 25, he urged the American people to vote Democratic in the upcoming congressional elections of 1918. He said that “the return of a Republican majority to either House of the Congress would . . . certainly be interpreted on the other side of the water as a repudiation of my leadership.” And so, by his very own proclamation, he stood repudiated, for the Republicans captured both houses of Congress. As usual, he had not taken time to engage in any worst-case contingency planning as he yielded to his latest epiphany and indulged himself in yet another ill-considered outburst.

What was wrong? There is reason to believe that the medical theorists may well be correct — that for more than a year (and perhaps for several years) before the stroke of October 2, 1919, Wilson suffered from cerebro-vascular degeneration that led to episodic dementia.

As the German position fell apart in the fall of 1918, Wilson botched the negotiations for the armistice. As usual, he sent Col. House as his representative and he gave him no written instructions at all except to emphasize his own commitment to freedom of the seas and the other principles set forth within the Fourteen Points. And so as House obsessed about freedom of the seas, harsh armistice terms were imposed upon the Germans, terms that undermined Wilson’s goal of “peace without victory” in several ways. Most importantly, the armistice stripped the Germans of power with which to resist the even tougher terms that would be hammered out in Paris in 1919. One of the armistice terms, for example, continued the wartime blockade of the central powers. Thus the British and the French would be able to use the weapon of hunger in order to compel the Germans to sign the Versailles Treaty.

But Wilson was busily preoccupied with the membership of the delegation that would travel with him to Paris for the upcoming peace conference. And not a single Republican was included in this delegation except for a junior retired diplomat named Henry White. Henry Cabot Lodge, who would soon become the new Senate majority leader and chairman of the Senate foreign relations committee, found Wilson’s behavior very interesting, and he savored the prospect of making Wilson pay — and pay dearly — for his high and mighty ways.