The Warren Court Decisions Earl Warren Said Were the Most Important ... "One Person, One Vote"

J. Douglas Smith is the author of On Democracy’s Doorstep: The Inside Story of How the Supreme Court Brought “One Person, One Vote” to the United States, published by Hill & Wang, June 10, 2014. 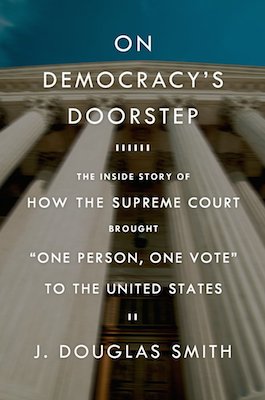 In an age of increasingly sophisticated, computer driven gerrymandering, an imagined, but non-existent, epidemic of voter fraud that has led to a profusion of voter identification laws, and an infusion of corporate money into the electoral system, we as Americans continue to wrestle with basic notions of fair representation. As we struggle to make our political system more truly democratic, we ought to consider the bold and historic actions taken by the Supreme Court of the United States fifty years ago this month.

On June 15, 1964, just four days after the United States Senate brought an end to the filibuster against the Civil Rights Act, the Supreme Court of the United States handed down a series of decisions that established the principle of “one person, one vote” in all state legislatures. For the remainder of his life, Chief Justice Earl Warren maintained that these decisions trumped all others made during his tenure, including the segregation decisions, in terms of their importance to American democracy.

Prior to the reapportionment rulings, American democracy was a deliberately misshapen enterprise. In a U.S. version of “rotten boroughs,” district boundaries in almost every state were readily drawn to give some citizens a far greater voice than others. In California in 1960, for example, a state senator from the Eastern Sierra had a mere 14,000 constituents, while a peer from Los Angeles represented more than six million.

Like Jim Crow, this practice seemed to defy the most elementary notions of democracy as a system of popular self-rule – and yet it had many defenders. Malapportionment circumscribed the political power of labor and civil rights advocates and promoted a pro-business, anti-labor agenda of low taxes, limited government spending, and minimal regulation. In the American South, malapportionment served as a cornerstone of white supremacy, ensuring the overrepresentation of the most ardent segregationists and thus further delaying the realization of civil and voting rights for African Americans. As the 20th century proceeded, urban and suburban populations swelled dramatically while legislative districts remained roughly the same. As a result, minority rule intensified.

After World War II, individual citizens, municipal officials, and civic organizations began to seek relief, but repeatedly failed, thwarted by a conspiracy of inaction among lawmakers and judges.

Finally, in 1962, the Supreme Court decided the time had come to intervene. In Baker v. Carr, a majority of the Warren Court ignored the angry dissent of Felix Frankfurter and ruled that federal courts did have jurisdiction to consider whether or not legislative malapportionment violated the Equal Protection Clause of the Fourteenth Amendment. Deliberations in Baker proved so exacting that they contributed to the physical decline and ultimate resignation of Frankfurter and one of his colleagues.

Baker v. Carr did not establish a standard for states to follow in drawing legislative districts, but the decision did open the doors of the federal courts to litigants to challenge malapportionment. Within two years, attorneys and plaintiffs in more than three-dozen states had done just that.

During a tumultuous term that began in October 1963 and was tragically interrupted by the assassination of President John F. Kennedy, the Supreme Court heard oral arguments and issued full opinions in seven of these cases. In February 1964, the Court announced that each state’s districts for the U.S. House of Representatives must contain, as nearly as possible, the same number of people. What came next proved far more controversial.

On June15, 1964, Warren delivered the Court’s opinion in Reynolds v. Sims. Declaring that “legislators represent people, not trees or acres,” he announced that the Equal Protection Clause required both chambers in a state’s bicameral legislature to be apportioned according to the principle of “one person, one vote.”

Although less well-known than Reynolds, a companion case, Lucas v. Forty-Fourth General Assembly of Colorado, turned out to be the most important decision handed down that day. In it, the Court made clear that its ruling in Reynolds left no room for states to deviate from straight population equality in either branch of a bicameral legislature, even if a state’s voters supported a less rigorous standard in a referendum. In one broad stroke , the Court effectively rendered unconstitutional almost every state legislature in the nation. By the end of the decade, the Court had determined that apportionments for all elective municipal and county offices—including city councils, boards of supervisors, and school boards, among others—must adhere to the same standard.

Proponents of reapportionment hailed the decisions as “magnificently liberating,” a step “toward establishing democracy in the United States,” while opponents denounced them as the most significant “usurpation of power by the judicial branch” in American history. Opposition to the decisions of June 15, 1964, soon coalesced around Senator Everett Dirksen of Illinois, the Republican Minority Leader who enjoyed close ties with national business organizations. Dirksen championed a constitutional amendment that would have allowed state legislatures to apportion one branch of a bicameral legislature on factors other than population. When this approach failed to draw enough support in the Senate, he and others took a more radical step. In order to overturn the court’s decision, they sought to hold the first Constitutional Convention since the founding convention of the 1780s. Over the course of five years, from 1964 to 1969, thirty-three states, just one short of the constitutional threshold, petitioned for such a convention.

Ultimately, time proved the most important ally of the pro-reapportionment forces. The principal of “one person, one vote” soon became the norm in every state and led to a profound transformation in American democracy. In many states, the stranglehold of rural voters was broken, as residents of the burgeoning suburbs exerted more influence.

As the essence of majority rule confronts new challenges, most especially from a profusion of corporate money into the electoral process and a frightening retreat from the massive achievements of the Voting Rights Act, we would do well to remember the reapportionment revolution of the 1960s and its reminder of the need for constant vigilance against counter-majoratarian impulses in our democracy.