This Is What a New US-Russia Relationship Could Look Like

Walter G. Moss is a professor emeritus of history at Eastern Michigan University. He is the author of A History of Russia, Vol. I and Vol. II and is a Contributing Editor of HNN 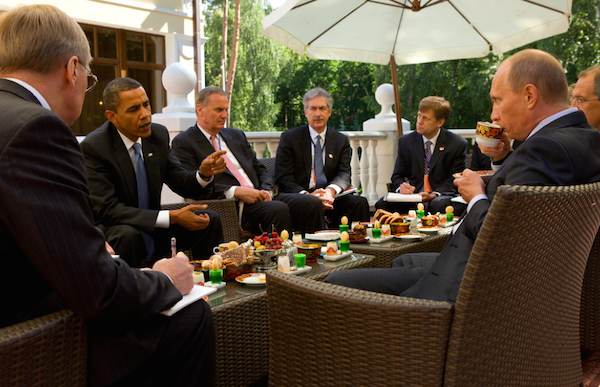 In previous HNN essays I have been critical of Russian and U.S. policies toward each other. The last of these essays, motivated by the current Ukrainian crisis, stated that our post-1991 policy toward Russia has been “stale, unimaginative, and wrong-headed.” Below are suggestions for a new U. S. approach—what Russia should do is another matter. On this 100-year anniversary of the start of World War I, my approach aims at peace, seeking to avoid the horrors of war, which some U.S. citizens are too blasé about since we have not had a war on U.S. soil since the Civil War. It is also one of “ethical realism,” as Anatol Lieven and John Hulsman defined the term in their 2006 book on foreign policy. And it is heavily indebted to critics mentioned in previous essays (from the left and the right) of our post-communist Russia policy.

A new-thinking approach should start with being realistic about Russia’s position vis-à-vis Ukraine. It would recognize that there is little the United States can do now to restore Crimea to Ukraine, and that Ukraine shares a lengthy border with Russia and is closely tied to it by extensive trade, especially natural gas imports. It would acknowledge that about a third of Ukrainians speak Russian as their primary language, and many eastern Ukrainians, including those fighting central-government forces, are more pro-Russian than pro-Western. It would also recognize that it is highly unlikely that any effective U.S. or NATO military response would be forthcoming if Russian troops invaded Ukraine. Moreover, a new U.S. policy would more realistically address the growing divisions among NATO countries on how best to deal with the crisis in Ukraine.

This new policy, however, would also be ethical by reflecting values such as empathy, humility, prudence (or practical wisdom), and tolerance, as I have identified them in an essay on “Political Wisdom.” And it would maintain our moral and legal commitment to NATO collective security, as well as best serve the interests of the Ukrainian people.

Such a new-thinking policy would be the opposite of what Senator William Fulbright described in The Arrogance of Power (1966) and what former Secretary of Defense Robert Gates referred to when he wrote: “The arrogance, after the collapse [of the Soviet Union], of American government officials, academicians, businessmen, and politicians in telling the Russians how to conduct their domestic and international affairs . . . had led to deep and long-term resentment and bitterness.” It would also be unlike that of the hawkish Victoria Nuland (Hillary Clinton’s former State Department spokesperson and present Assistant Secretary of State for European and Eurasian Affairs), who last winter in a conversation with the U.S. Ambassador to Ukraine displayed considerable arrogance—and said “f--- the EU [European Union].”

A new Russia policy is necessary not only because of the present tensions surrounding Russian-Ukrainian relations—important as they are—and because our adversarial relationship is hurting us in many ways (see, e.g., here), but also because our relations with Russia remains vital to our global interests. Although our dealings with Asian countries, especially China, have become more important in recent decades, Stephen Cohen’s statement made in 2011 remains worth considering.

The road to American national security still runs through Moscow.

Despite the Soviet breakup twenty years ago, only Russia still possesses devices of mass destruction capable of destroying the United States and tempting international terrorists for years to come. Russia also remains the world’s largest territorial country, a crucial Eurasian frontline in the conflict between Western and Islamic civilizations, with a vastly disproportionate share of the planet’s essential resources including oil, natural gas, iron ore, nickel, gold, timber, fertile land and fresh water. In addition, Moscow’s military and diplomatic reach can still thwart, or abet, vital US interests around the globe, from Afghanistan, Iran, China and North Korea to Europe and Latin America. In short, without an expansive cooperative relationship with Russia, there can be no real US national security.

In The Limits of Partnership: U.S.-Russian Relations in the Twenty-first Century (2014), Angela Stent makes a similar point: “Russia’s geopolitical situation straddling Europe and Asia, its large nuclear arsenal, and its permanent seat on the United Nations Security Council give it enduring leverage. It can support or hinder the pursuit of key U.S. national security interests” in such places as Afghanistan, Iraq, Iran, Syria, China, and North Korea.

In his Soviet Fates and Lost Alternatives: From Stalinism to the New Cold War (2011 ed.), Cohen argues that we need a new Russia policy. It would end our arrogant, “triumphalist” approach, our “Blame Russia First syndrome,” and our constant “NATO expansion toward Russia.” In 2008 Western leaders announced long-range plans for Ukraine and Georgia to join NATO—three other former Soviet republics (Estonia, Latvia, and Lithuania) had already joined in 2004. Although Ukrainian and Georgian future membership seems less likely now, it remains a major Russian goal to prevent it.

Stent stresses that “since 1992, a central Russian objective has been to regain its status as a great power and be treated as an equal by the United States—a goal that was constantly frustrated.” She believes that U.S. policymakers must recognize that Russia’s worldview is different than ours, “exercise restraint in publicly commenting on developments in Russia,” and “should focus on those concrete areas” where we “can and must work together.” Among these areas, she lists counterterrorism and counterproliferation, including restraining any Iranian nuclear weapon development; trade and business relations; and dealing with global hot spots like Syria and “new frontiers, such as the Arctic.” (In President Obama’s most recent major speech on foreign policy he stated that “the most direct threat to America at home and abroad remains terrorism.”)

No better cooperative U.S.-Russian opportunity presents itself today than working together to help bring national healing to Ukraine. A creative and imaginative settlement of the present crisis could not only make life better for Ukrainians, but become the starting point for the new-thinking Russia policy advocated here. In his essay “Ukraine Should Be a Bridge, Not a Battleground,” which the former Reagan and Bush (sr.) ambassador to Russia, Jack Matlock, called “brilliant,” Anatol Lieven adapted his title from the following words of former Nixon-Ford Secretary of State Henry Kissinger: “Far too often the Ukrainian issue is posed as a showdown: whether Ukraine joins the east or the west. But if Ukraine is to survive and thrive, it must not be either side’s outpost against the other—it should function as a bridge between them.”

What elements would such a “bridge” settlement of the Ukrainian crisis contain? First, a cease-fire must occur between national troops and eastern Ukrainian rebels. On 17 June Ukrainian President Petro Poroshenko talked by phone with Russian President Vladimir Putin about such a step and also about other elements of a peace plan, including tightening controls over the Russian-Ukrainian border, amending the Ukrainian Constitution to allow for more regional-government authority, and recognizing Russian-language rights. Although many potential obstacles to peace remain and the immediate response from rebels was distrustful and hostile, the plan was an encouraging sign.

In May 2014, Lieven wrote: “What is truly strange and terrible about this looming [Ukrainian] disaster is that all the leading players already know and agree about what the only solution can be, even if they disagree on the details and the timing: a federal Ukraine with elected regional governments and robust protection for regional interests.”

Both Lieven and Nicolai Petro also emphasize the importance of recognizing the rights of Russian-speaking Ukrainians. Petro writes of the need “to shift Ukrainian patriotism away from its obsession with language and national identity narrowly defined, toward a civic patriotism that would allow those who cherish their Russian heritage to also be fully recognized as Ukrainians. Nothing would accomplish this better than the president publicly affirming that the Ukrainian nation is and always will be, at its heart, bilingual and bicultural.”

Undoubtedly, many other issues would still have to be settled before the Ukrainian crisis is over—a new Russian-Ukrainian natural gas deal being one of the most significant. But taking the first few steps indicated above seems essential for much of what must follow.

Petro emphasizes that “the Ukraine crisis has always been, quintessentially, a domestic feud between two visions of Ukrainian identity,” and that Russia and the West “are marginal players in this drama.” Nevertheless, both forces are capable of tipping the scales more toward a Ukrainian civil war or toward a just peace.

As on the eve of World War I, major powers again have a choice to make. In 1914 they each chose war to further national interests. Today to further such interests they can push Ukraine in either a pro-Western or pro-Russian direction. But such outside pressure just widens Ukrainian national discord and increases the chances for all-out civil war. Leaders on all sides need to contemplate the countless tragedies that might result from such a war and instead do some new thinking that would encourage peace.

A settlement of the Ukrainian quagmire could then be an important first step to a more realistic and ethical U.S. approach to Russia. It could halt the increasing alienation between the world’s two most powerful nuclear powers and lead to more cooperation on the many U.S. security concerns mentioned above from Afghanistan and Syria to counterproliferation and counterterrorism. (See here for an indication of Russia’s view on more cooperation.)

But a settlement and subsequent increased cooperation can only come about as a result of a new-thinking, fresh approach—by both major powers. In his The Audacity of Hope, Barack Obama wrote that empathy “is at the heart of my moral code”; it is “a call to stand in somebody else's shoes and see through their eyes.” But in his Russia policy he, like his predecessors since 1991, has not displayed much empathy with all the Russians who resent what they view as U.S. arrogance. (See here for the results of a late May 2014 poll that found that “only 18 percent of Russians speak well of the United States.”)

Empathy should not be confused with weakness. Rather it should be a first step in moving toward conciliation and avoiding war. In international affairs, as well as national politics, compromise is absolutely necessary. As I have previously indicated, it can be honorable and has had many illustrious defenders. Perhaps because so many of us have forgotten this here at home, we pay insufficient attention to it abroad.