Marc Stein is the author of "Rethinking the Gay and Lesbian Movement" (2012), "Sexual Injustice: Supreme Court Decisions from Griswold to Roe" (2010), and "City of Sisterly and Brotherly Loves" (2000). He is a professor of history and gender, sexuality, and women's studies at York University in Toronto and in August will become the Jamie and Phyllis Pasker Professor of History at San Francisco State University. 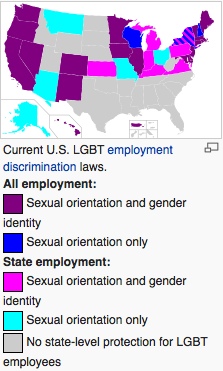 President Obama apparently will soon sign an executive order requiring most companies that have contracts with the U.S. federal government to pledge that they do not practice employment discrimination based on sexual orientation and gender identity. Media reports indicate that he is doing so because it is highly unlikely that the Republican-led U.S. House of Representatives will pass the Employment Non-Discrimination Act, which would provide a limited national ban on sexual orientation and gender identity discrimination in the workplace. Many commentators have presented these developments as the culmination of a struggle that began 40 years ago, in 1974, when U.S. Representative Bella Abzug introduced legislation that would have added sexual and affectional preference as prohibited grounds of discrimination to the 1964 Civil Rights Act. In fact, there is a longer history to this struggle, which began in the 1950s and accelerated after the passage of the groundbreaking 1964 legislation.

One of the more dramatic episodes in this struggle occurred in 1968, when the Philadelphia chapter of the Daughters of Bilitis (DOB), a national lesbian organization, reported in its monthly newsletter on the "glorious strike" of homosexuals that was wreaking havoc on the U.S. economy and U.S. politics. According to the newsletter, "President Johnson appeared on network television last night—pre-empting 'The Flying Nun'—to urge the 10 million striking homosexuals to return to work. Justifying his concessions to the strikers, the President said, 'Our department store windows lie bare; our gym teaching force has been decimated; and Lady Bird can't get her hair done.' Noting that the lack of a quorum in the Senate was also a problem, the President pledged to end by Executive Order all federal discriminatory practices against homosexuals."

In case its readers missed the joke, the DOB Philadelphia newsletter helpfully pointed out that this was its April Fools' issue. In April 1969, however, after the DOB chapter had changed its name to the Homophile Action League (HAL), the new group's newsletter reported that the Eastern Regional Conference of Homophile Organizations had entrusted the local group to carry out its "Employment Discrimination Survey." Shortly thereafter, HAL wrote to 500 large corporations to ask about their policies. In March 1970, HAL reported on the results in an editorial titled "On Economic Independence for Gays." According to HAL, only twenty companies had replied to the survey and only one, Bantam Books, "answered unequivocally that the sexual orientation of applicants and employees was completely irrelevant to their suitability for employment and promotion." Several said that "they would employ homosexuals as long as no one knew they were homosexuals." One said that it would employ homosexuals but requested that HAL not publicize this fact.

According to HAL, the survey results demonstrated that gays and lesbians needed employment counselors more than psychiatrists and fair employment laws more than mental health policies: "The one overriding problem we homosexuals face is economic, not emotional, for most of us are financially secure only to the degree that we hide our sexual orientation from our employers." Looking toward the future and influenced by the African American freedom struggle, HAL recommended two strategies for achieving the "emancipation of homosexuals from economic dependence." One was to promote "gay capitalism," which would involve "encouraging gay businessmen to hire gays" and "gay consumers to support them." The other was to challenge "laws and customs which deny us equal employment opportunities."

We have certainly witnessed the growth of "gay capitalism" over the last four decades, though it is equally clear that this has not resulted in the "emancipation of homosexuals from economic dependence." Millions of LGBT workers continue to experience sexual and gender discrimination; many LGBT people continue to struggle economically; and economic inequality within the LGBT world reflects and contributes to the problems of economic inequality in the United States more generally. As for fair employment laws, the absence of these mean that in the majority of U.S. states it is perfectly legal in a variety of circumstances to practice employment discrimination on the basis of sexual orientation and gender identity.

Obama's executive order is an important step, though a limited one. It will likely exempt small businesses; it may exclude religious organizations; and it will not directly challenge employment discrimination by companies that do not have contracts with the federal government. Some of the largest corporations that could be affected by Obama's executive order will be Exxon-Mobil, Berkshire Hathaway, and Valero Energy. According to the Human Rights Campaign Foundation's "Corporate Equality Index 2014," these three companies—all in the top twenty Fortune-ranked corporations in the United States--lack basic anti-discrimination protections for LGBT workers.

One company—Bantam Books—was singled out for praise in HAL's 1970 employment discrimination survey. More than 300 major businesses earned the Human Rights Campaign's top employment equity score in 2014. This represents an extraordinary transformation and is the result of the efforts of countless activists and advocates. Obama's executive order will be another important achievement. It should not, however, be seen as a sign that the struggle for sexual equality in the workplace is over or that the United States has decided to address, in any serious way, the fundamental problems of economic inequality. For that, we just may need another "glorious strike."