How "Five Old Men" Started the Roll-Back of Hiroshima Revisionism

D. M. Giangreco is the author of Hell to Pay: Operation Downfall and the Invasion of Japan, 1945-1947 (Naval Institute Press, 2009) and his Journal of Military History article “Casualty Projections for the U.S. Invasions of Japan: Planning and Policy Implications” was awarded the Society for Military History's Moncado Prize in 1998. The following are Mr. Giangreco’s remarks at the 2011 reunion of the 58th Bomb Wing Association’ B-29 airmen and ground crew, Holiday Inn (Fisherman’s Wharf), San Francisco, September 13, 2011. The event was cosponsored by the New England Air Museum at the Bradley International Airport, Hartford, Connecticut. 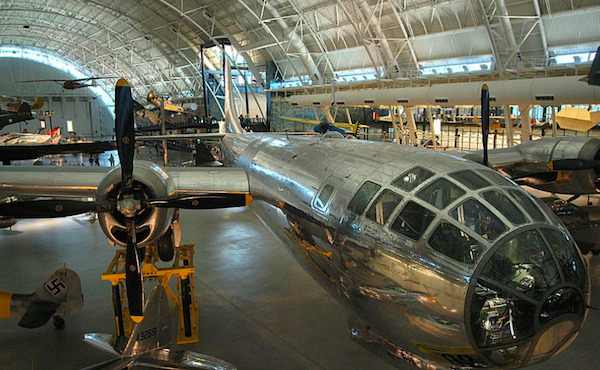 “Over the years, a handful of men persistently wrote to anyone they thought would listen and might act. In one of his letters, a member of this group referred to himself and his comrades as ‘only five old men.’ But those five were to prove remarkably influential on the fate of the [Enola Gay] exhibition.” -- Martin Harwit, former Director of the National Air and Space Museum in An Exhibit Denied

I need not get into a retelling of the battles with the Smithsonian’s Air and Space Museum – the Enola Gay fiasco -– now more than 15 years ago. Sanity, or a semblance of it, prevailed in the end thanks to the efforts of the “Five Old Men,” Bill Rooney, Burr Bennett, Ben Nicks, Don Rehl, and Frank Stewart, then John Correll and Monroe Hatch at the AFA [Air Force Association], plus a certain gentleman, Jim Pattillo, seated over there.

Of course, that was then, and as recently as just a couple weeks ago Jim wrote that although he was gratified to watch the ongoing –- and largely successful -– effort to “keep revisionist historians from holding America up for hatred, ridicule or contempt,” he was not optimistic about how things would play out in the future.

Jim wrote: “My greatest concern over the 20th Air Force Association's 1994-95 battle with the Smithsonian was that, regardless of the outcome in 1995, the revisionists need only wait until my generation has died-off before resuming their drum beat criticism of America. And, none of us will be here to help you respond to them, so I have fretted over the eventual result for more than 15 years.”

Now, what I told Jim was that he need not worry at all. The ship has sailed for these guys. The revisionists who came of age during the ban-the-bomb 50s and psychedelic 60s were a bit too impatient. Instead of waiting till Jim and the rest of your generation were properly planted, they moved too soon and the principal result of the NASM [National Air and Space Museum] fracas was to:

First, make the scattered criticisms of revisionist orthodoxy by the few historians who directly took them on -– only to be ignored, ridiculed, or both, for their trouble –- much more visible, which . . .

Second, encouraged others, like myself, to more closely examine and write on the subject, which . . .

Third, encouraged others –- who'd, frankly, known better but remained silent because they were operating within hostile "academic" environments -– to start setting the record straight in their own classrooms.

In short, our impatient revisionist friends overreached. As regards military historians specifically, the principal gain so far has been to reestablish institutional knowledge that had been fading among them. It has encouraged both these fellows, plus like-minded scholars and diplomatic historians, to be less timid when faced with revisionist assertions. Today, educators in general are far more willing to entertain the heresy that dropping the bomb just might have been a good thing after all.

Events played out something like this. In the immediate aftermath of the Enola Gay fight, there was an extreme amount of indignation and gnashing of teeth by the usual suspects over the "censorship" of the Smithsonian by supposedly all-powerful organizations like the Air Force Association and VFW as well as smaller groups like the 20th Air Force Association. In reality, things had not yet changed much at all in that individuals interested in reengineering history invariably set the agenda for discussions of the atom bomb in seminars and academic journals, as well as college and even high school classrooms where the unwary still tended to accept their documentation and conclusions at face value.

This had been going on for years because while the broad outlines of the plans for the invasion of Japan were fairly well known, few historians -– military or civilian -– had any knowledge of the fundamental details or familiarity with the documentation so copiously cited by "acknowledged experts," and with the grim realities Truman and his contemporaries could not avoid.

The devil is in the details, however, and those who knew instinctively that what was being said did not ring true would frequently find themselves either being maneuvered into simply keeping silent or finding that the discussion leaders' alleged command of "the facts" was sucking them into the rhetorical equivalent of "Nyah, Nyah, Nyah. I'm right and you're wrong."

A whole spate of useful books examining various aspects of the end of the war and the atom bomb decision were released in the general time frame of the 50th anniversary of the war’s end. But although they were produced by noted scholars, they did not fit into the established trend of Truman-bashing and were destined to die the slow death of obscurity as few of the people who might be able to use them would ever hear of their release. The ruckus raised by the Five Old Men and their cohorts changed all that, and the works of Bob Newman, Norman Polmar and Tom Allen, Ed Drea, Stanley Weintraub, and Bob Maddox released at that time received far more visibility than their authors could have dared hope for.*

In my own case, and following the books of these scholars, I produced a study in 1997 that examined the methodologies used to produce casualty estimates from the Enlightenment and American Revolution through World War II. It included precisely what was estimated as the Pacific war came to its bloody conclusion, and a sort-of “who knew what-when” for Truman and his senior advisors. Oddly, such a thing had not been produced before by a military historian, apparently because everyone alive when the war ended understood that a land invasion of Japan would have generated enormous casualties. No one had suspected that this was something that would later be seriously questioned. Said Dr. Michael DeBakey who put one of his students to work helping me locate certain documents: “It’s like having to prove that slamming someone’s head with a meat axe will kill him.” **

The very public Enola Gay mess was like a flashing white light. It was suddenly obvious that you did indeed have to “prove that slamming someone’s head with a meat axe will kill him” and, not only that, but that Harry S. Truman understood the dynamics of a meat cleaver plunging in the direction of that head. The fight at NASM focused critical attention on the problem –- indeed, I wouldn’t have even known about it otherwise, let alone written about it.

On the whole, many educators hadn’t particularly trusted the contentions of the revisionists but the research of Truman’s critics, thin as it was, was supposedly the only thing out there, displayed the right scholarly architecture, and had been gaining increasing acceptability throughout the 1970s and ‘80s (even among those who should know better) through repetition. Having taken careful note of this, the editor of George C. Marshall’s papers, Larry Bland, said to me several times before my casualties study was published that many people in the military history community were waiting for something like it to be produced so they could have something to “hang their hats on.” Judging by the extent and speed of the response, he appears to have been absolutely correct.

Since that time, many more books and articles have been produced by scholars who defend the use of the atom bomb to bring the war to a speedy end,*** and the assertions of the revisionists are regularly challenged. There are, and always will be, many in academia who will pretend that nothing has changed, and other educators who will tow the revisionist line because they are either lazy, or ideologically committed to the belief that Truman was a “mass murderer,” or simply because studying the military aspects of the end-game in the Pacific is just too distasteful to contemplate. It’s in their bones that military history is somehow “unclean” and, if you get too close, you will somehow morph into a cigar chomping Curtis LeMay.

Thankfully, these educators are doing a fabulous job of marginalizing themselves by ignoring the now readily available facts, and many of their colleagues are no longer restrained by a sort-of subliminal fear that if they broach even the slightest defense of Truman and his decision, their more politically correct colleagues may start watching them closely for signs that they are taking on a LeMay-like affection for big cigars and things that go boom.

And what this means to what’s called the “popular culture,” is that the criticism of Truman’s decision which increasingly crept into such things as television documentaries and general histories in the ‘70s and ‘80s, had disappeared nearly completely within the first few years of this century. Absolutely none of this would have happened if the vets hadn’t so publicly shined a light on the revisionist’s shenanigans some fifteen years ago.

** As a colonel in the US Army Medical Corps during the war, Michael E. DeBakey had examined the issue of casualty generation in great detail and his analyses were used by both Secretary of War Henry Stimson and the Army Chief of Staff, General George C. Marshall, in preparation for meetings with President Harry S. Truman. After WWII Dr. DeBakey became an energetic proponent of MASH units (Mobile Army Surgical Hospitals) and rose to the rank of brigadier general in the Army Reserve. He later became internationally known as a skilled and innovative heart surgeon.