Why a Contrarian History of the United States Is Needed Now

Ilan Stavans is Lewis-Sebring Professor in Latin American and Latino Culture at Amherst College. He is the author of "A Most Imperfect Union: A Contrarian History of the United States" (Basis Books, illustrated by Lalo Alcaraz). His new book, "Reclaiming Travel" (Duke University Press, with Joshua Ellison), will be out in the spring. 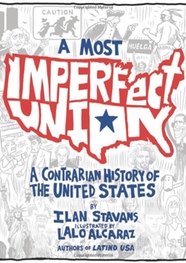 I’m not a historian by trade, nor do I want to be one. Historians must rediscover the past with rigor: with objectivity, attempting to humanize it. But the past cannot be exclusively the purview of historians; for better or worse, it belongs to all of us.

I’ve often been struck by the triumphalist single-sidedness—and, at times, nearsightedness—of American history. This, so the argument goes, is an exceptional nation made of exceptional individuals. What makes us exceptional as a country is the conviction that the United States has a responsibility above all other nations, that we are better—wiser, more ethical—than everyone else.

I didn’t grow up with this tacky indoctrination. I’m an immigrant from Mexico. After years of wandering, I chose to come to the United States in 1985, when I was in my early twenties. The reasons were simple: passionate about the life of the mind, I wanted to be part of an open society, to add my voice to it, to live where things mattered. Thirty years later, I frequently find myself complaining of the closing of the American mind: how intolerant it has become, its apathy toward other cultures.

Immigrants are like converts to a new religion. To be embraced, they need to undergo a dramatic process of adaptation. They need to shed their old clothes and dress up in new ones. They feel their choices—indeed, their entire existence—is being questioned all the time. So they must explain themselves to others.

I wrote A Most Imperfect Union: A Contrarian History of the United States because, this being a nation of newcomers, I’m tired of the hypocritical way immigrants are constantly being described today in public discourse. And in the way they are seen as an appendix in the nation’s past. The focus is always on the “great white men” who created this nation, on how we imitated the political principles of the French Revolution, on how emancipation made us more humane. Freedom is the buzz word: nowhere on earth are people more free than here.

Really? Freedom, in my view, is wasted on Americans. Not because we’re free do we always know what to do with our freedom. Although, in truth, we aren’t as free as we pretend to be. Look at how corporate America constantly manipulates our taste. Look at our inefficient, lethargic, bankrupted political system, defined by leaders more interested in their reputation than in the well-being of the electorate. Is it true that we vote for them when immense amounts of money, frequently coming from anonymous sources, are shamelessly funneled to brainwash voters?

I don’t worry about the future because everything that happens always happens in the present. But the past does concern me. For it is how we explain ourselves that makes us act the way we do. So a revision of the past is crucial. Needless to say, there is no narrative of history—mine included, of course—that isn’t biased. What matters isn’t how subjective we are but how committed we are to skepticism. That is the basic message of my book: don’t take what you hear about our past on face value; and don’t leave it to others to tell it to you. Question everything about it: why it is what it is and how it came to be so.

The only value that is truly American is contrarianism: the right to go against the current.

A Most Imperfect Union isn’t a people’s history, as the New York Times has generously described it. I’m not an alumnus of the Howard Zinn approach to the past. Yes, the book focuses not only on the Founding Fathers and the figures of the Civil Rights Era but on those who are often left out, “the tired, the poor, the huddled masses yearning to breathe free.” Yet it’s also about the history of sexuality in America, the history of food, the history of our toys, our relationship with the dead, the history of our dreams, the history of how we tell history.

Plus, it is American history with a Latino bent. The book isn’t written in traditional prose but in cartoons. In 2000, I collaborated with syndicated-cartoonist Lalo Alcaraz in Latino USA: A Cartoon History. We came to know each other serendipitously. After seeing Alcaraz’s satirical work in LA Weekly, I sent him a fan letter. Soon after, we decided to collaborate on a book-long retelling of Hispanic history in the United States. My purpose then was to cover an area rarely explored by historians: the coalescing nature of Latino life north of the Rio Grande. Up until then, that story was often compartmentalized into national sub-narratives: Mexican-Americans, Cuban-Americans, Dominican-Americans, Puerto Ricans in the mainland, and so on. But the true mission was more complex: to ask if Latinos actually have a shared, usable past; and, if so, what kind of past that might be.

To our surprise, the volume became a runaway success, adopted into high-school and college courses across the country. On occasion, Alcaraz and I, in our email correspondence, talked about a sequel. It wasn’t a serious proposition until John Sherer, the publisher of Basic Books, asked us to prepare a 15th-anniversary edition of Latino USA. When the possibility of embarking on a new project came up, it felt to me as if A Most Imperfect Union, rather than a sequel, could be seen as a chapter of this larger, more ambitious endeavor, the first having been a tree and the second the forest in which it stands. Now there is talk of doing, at some point soon, an even more epic installment: a cartoon history of the world, again from a skeptic’s viewpoint.

I now know it’s easy to complain about how innocuous that conversation on ideas in America has become. A much harder —and more significant— task is to change its tenor.