So You Want to Get Good Scores on Rate My Professor?

Thomas Buttaccio is an HNN intern. He recently graduated from the University at Buffalo. 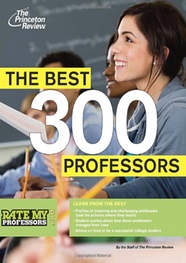 The Princeton Review rates some of the top professors in the United States in it’s publication The Top 300 Professors. We wanted to find out the top history educators’ secrets: Why students like these professors and why they are so valued in the Princeton Review’s publication, which is based on reviews collected from the website, Rate My Professor. To learn their secrets three of the top history educators agreed to be interviewed: Clemson University's Paul Anderson, the University of Alabama's John Beeler and William and Mary's Philip Daileader.

The first history professor on the list was Dr. Paul Anderson. Dr. Anderson teaches at Clemson University in South Carolina and specializes in the American Civil War. After completing his undergraduate degree, Dr. Anderson wrote for various papers, including the Winston Review. Writing for newspapers allowed Dr. Anderson to get out of his comfort zone by talking to people from many different walks of life. The experience broadened his outlook. By having these experiences his curiosity grew. This was a crucial part of his motivation in studying history.

While studying history in graduate school, he realized an important fact: no one teaches you how to teach, you throw yourself into it and sincerely try to stimulate and pique the students’ attention. To get the attention of his students Dr. Anderson doesn’t like to use old projectors or overheads, rather, he said he feels that they are cumbersome and chooses discussion-based lectures instead. In classes geared towards discussion, students learn how to learn, which Anderson thinks is the most important aspect of learning history. “By learning how to learn, you can accomplish all manner of tasks, short of things that require technical skill- like building a bridge.”

Keeping students interested is critical, he says. One way to do this is by playing on their curiosity. “By teaching history, you are teaching curiosity,” Dr. Anderson says.

He also tries to be inspirational. When asked why he chose to study the American Civil War, he said he was inspired by a teacher he once had who'd instilled the love of that particular period in history. “Students—especially undergraduates—tend to look for someone to look up to, as a sort of role model.”

He succeeds. A testimonial by a student of his on Rate My Professor stated: “Professor Anderson is the best teacher Clemson has to offer, he will make you work for your grade - but you'll come away with so much knowledge. He keeps you engaged and always wanting more.” In short: “Highly recommend him, he will help you in any way he can.”

Dr. Beeler earned his Ph. D. in History from Illinois in 1990 and teaches European and Naval History at the University of Alabama. He wasn’t always on track for being a historian. As a young man, Dr. Beeler spent time working in the service industry as a cook and server, until he felt he was “intellectually vegging” for long enough. Dr. Beeler admitted that there is a lot of patience needed to work in the kitchen, which happens to be lucrative and enjoyable for many, but he didn’t quite have it, and decided to act on his love of history and go to grad school.

He discovered he loved to teach when he first taught a World Civilization 101 class as a graduate student. For Dr. Beeler, the key to being a good professor is creating an atmosphere conducive to class discussion. Students have to feel comfortable asking questions and being themselves. He believes that when teaching, it is crucial that you’re approachable, yet passionate about history, and that you be able to convey that passion to your students. To do that you must be able to have an entertaining lecture.

When delivering lectures, Beeler takes on the role of a story teller. He walks the classroom during his lecture, delivering it by heart, resembling an orator on stage. “I’d rather botch a great lesson than deliver a mediocre lesson from notes,” Beeler exclaimed. Knowing the course material by heart makes quite the impression on students, according to a review on Rate My Professor: “[Dr. Beeler is an] Amazing teacher! He is super enthusiastic about history and it definitely makes students pay attention. He knows absolutely everything by heart.”

While not having any concrete teaching methodology, he admits there are a lot of new technologies that help teaching quite a bit. “Overhead projectors really sucked with color images” Beeler asserted. “New digital media technologies are really a great boon to me in the classroom.” Students of history are probably aware of what he is talking about: being shown old images in color on an older overhead projector sometimes tends to blur in a way that you can’t even really make out what is being shown. But with new digital projectors students can see vivid pictures and paintings from the time period they’re learning about, giving them a new level of context on sources.

Dr. Daileader started studying history at John’s Hopkins University because he wanted to be a historian. However, he said -- in good humor -- that “At Johns Hopkins, where I was an undergraduate, courses in medieval history tended to be taught in the afternoon, while courses in US history tended to be taught in the morning. Like many undergraduates, I preferred not to wake up early, so I enrolled in medieval history courses.”

As the interview progressed, Dr. Daileader spoke of a few hardships he had when becoming a professor. He was interested in getting all of his content down in a lecture until he realized that there was an infinite amount of information that he could cover and that the quality of the lecture was more important than the amount of content that he was trying to deliver. “Over time, I have learned that it is more useful for students if I focus on fewer topics and address them with some thoroughness. That way, we can tackle each topic's complexities, and it is in tackling the complexities that we learn how to think.”

Like Dr. Beeler, Dr. Daileader also likes to use modern technology in the classroom, but he's decidedly less enthusiastic. “Technologies that help me to communicate better with my students are quite welcome, but I have no use for technologies that encourage unthinking, instantaneous responses on the part of students and teachers; that, through neural overload, hinder rather than facilitate the development and exchange of ideas; or that simply drain all dynamism and human connection from the classroom.” Describing himself as an “Old School” style professor, Dr. Daileader believes that lectures, paper writing and discussion are still crucial for learning history; they help students to think historically and analyze what they've learned. However, he did admit that the traditional lecture model of history education can be improved. He recommends students be allowed to make their own presentations to develop their oral skills.

While sites such as Rate My Professor aspire to highlight the qualities of great professors, they are also known to be popularity contests. Educator rating sites can’t have a fool-proof formula to determine the best professors, mostly because each student is different and responds to different teaching approaches. However, when looking through reviews that were actually carefully written by students, one can see that these professors were selected for a reason, not just popularity.