Review of "Black Against Empire: The History and Politics of the Black Panther Party" by Joshua Bloom and Waldo E. Martin, Jr. 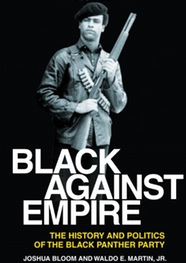 The Black Panther Party (BPP) is a growing topic of interest for scholars with numerous dissertations being produced on various party programs and local activities, but in Black Against Empire, Joshua Bloom, a Fellow at the Ralph J. Bunche Center at UCLA, and Waldo E. Martin, Jr., Professor of History at the University of California Berkeley, seek to provide a synthesis of Panther political history—focusing upon the meteoric rise and fall of the BPP between 1967 and 1972. This is a well written narrative and analytical history that does not overwhelm the reader with theoretical references, but it is also a book that may antagonize some readers with its sympathetic portrayal of the BPP and its revolutionary ideology.

Essentially, Bloom and Martin write their history from the perspective of the BPP, relying upon oral histories of the party as well as a close reading of the party newspaper, The Black Panther. The authors also devote considerable attention to the turbulent historical context in which the Panthers rapidly grew and declined. Bloom and Martin argue that the core ideological construct provided by the party’s founders Huey Newton and Bobby Seale was the concept that black Americans in the nation’s inner cities constituted internal colonies exploited by capitalism and controlled by the police. Thus, colonized and exploited black Americans needed to make common cause with people of color around the world, such as the Vietnamese, Algerians, and Cubans, who were resisting American imperialism. Based upon their experience in Oakland, California, Newton and Seale concentrated their attention upon the police as tools of state oppression, and seizing upon California’s law allowing the open carrying of weapons, the Panther leaders urged the black community to arm themselves against the police and monitor their activities in the ghetto.

The image of the armed Panther with black berets and trench coats resonated in the black community and terrified the political establishment, resulting in a proposed law to limit the open brandishing of weapons in California. The Panthers gained considerable national press when they entered the California state legislature with their weapons. The law restricting the open carry of loaded weapons passed, but the stature of the BPP was certainly elevated. Bloom and Martin do not make analogies to the current gun debate in America, but it is ironic how the National Rifle Association today often employs coded racial arguments to justify the arming of American citizens.

Bloom and Martin do note that the California gun controls directly challenged the image of the armed Panther protecting the black community, but the authors argue that the Panther leaders’ analysis of the black ghettoes as ready for rebellion was reflected by the urban revolts in cities such as Newark and Detroit. While these rebellions lacked centralized direction and planning, Bloom and Martin contend that the armed resistance of many blacks was more reflective of revolt than uncontrolled rioting, and the BPP was well positioned to proclaim itself as the vanguard of this revolutionary activity. The nonviolence of the Civil Rights Movement played an important role in abolishing de jure segregation with the 1964 Civil Rights Act and 1965 Voting Rights Act, but the colonization and oppression of the ghetto continued unabated. It should be noted, however, that Bloom and Martin tend to overlook the armed defense undertaken by many black Americans in the South against white violence.

The authors perceive black power advocates such as the Panthers reflective of a black nationalist legacy going back to Marcus Garvey, but the Panthers established a greater base in the black community during the late 1960s and early 1970s than Pan African groups such as Ron Karenga’s US. Panther prestige, according to Bloom and Martin, was enhanced by Newton’s arrest for the killing of Oakland police officer Jon Frey in the early morning hours of October 27, 1967. Bloom and Martin go into the movements of Newton and Frey before the altercation which left Newton wounded, but they do not develop the details of the shooting—essentially adopting the position of Newton’s defenders that the disputed facts did not matter as Newton’s case was best placed within the historical context of police harassment and that a courageous black man fought back and would no longer be subjected to such intimidation. And certainly the “free Huey” campaign, orchestrated by the media savvy Eldridge Cleaver, brought many allies into the Panther camp.

The efforts of the BPP to create alliances, in many cases with white groups where the party served as the vanguard of socialist revolution, are an essential theme in Bloom and Martin’s history of the BPP. In addition to the image of an armed force guarding the ghetto, the BPP established roots in the black community with health, education, and breakfast programs for hungry children; challenging the notion that the liberal Great Society of President Lyndon Johnson was addressing the needs of black Americans. The Panther social programs increased their visibility and brought in many new members, many of them women. Bloom and Martin acknowledge that the initial leadership of the BPP was exclusively male and often focused upon issues of black manhood. However, women such as Elaine Brown, Kathleen Cleaver, and Ericka Huggins assumed leadership roles and questioned sexism within the party; although gender contradictions were never fully reconciled. The BPP also sought to make connections with revolutionary anti-imperialist groups around the world. Thus, the Panthers established diplomatic relations with governments in North Vietnam, China, Cuba, and Algeria which the United States refused to recognize. The liberation movements of Puerto Ricans, Chicano/as, Asians, and Native Americans also enjoyed the support of the Panthers such as the strike at San Francisco State University to forge a diverse rainbow coalition in admissions, hiring, and curriculum. The BPP also made common cause with the Students for a Democratic Society and anti-Vietnam War movement; perceiving the protests against the war as part of the anti-imperialist struggle.

These alliances brought prestige, membership, and funds to the BPP, and the law and order administration of Richard Nixon responded with repression of the Panthers. The FBI COINTELPRO efforts to infiltrate and foster violence against and among the BPP, including the police murder of Panther leader Fred Hampton in Chicago, are well chronicled, but Bloom and Martin do not place primary blame on this oppression for the demise of the party. Instead, they argue that government actions such as the arrest of the Panther 21 in New York City only increased enthusiasm and contributions for the BPP by its many allies. According to Bloom and Martin, what brought about a decreased support for the BPP by its allies was the concessions made by the Nixon administration in winding down the war and draft, opening of diplomatic relations with former revolutionary governments such as China, and reaching out to black Americans with affirmative action, increased university enrollment, community policing with the hiring of black officers, and more elected minority officials at all levels of government.

Without the support of its allies, Bloom and Martin insist that the internal contradictions within the BPP became more apparent. The party had preached revolution, but its desire to attract allies prevented the BPP from endorsing guerrilla warfare. Freed from these restraints, the party divided with the international faction headed by Cleaver calling for armed insurrection, while Newton, freed on appeal due to a legal technicality, and David Hilliard embraced “revolutionary intercommunalism” with concentration upon developing socialism in the home base of Oakland until opportunities for spreading the revolution were more favorable. The actions of Newton, however, became increasingly erratic as the Panthers turned to violence against one another. Bloom and Martin credit Elaine Brown with attempting to make the BPP a force in Oakland and California politics, but they conclude that this more traditional approach made the Panthers little different from other community groups around the country. In the final analysis, Bloom and Martin seem to lament the passing of the Panthers and their revolutionary potential, writing, “No revolutionary movement of political significance will gain a foothold in the United States again until a group of revolutionaries develops insurgent practices that seize the political imagination of a large segment of the people and successively draw support from other constituencies, creating a broad insurgent alliance that is difficult to repress or appease. This has not happened in the United States since the heyday of the Black Panther Party and may not happen again for a very long time” (401). Bloom and Martin have produced a fascinating and comprehensive political history of the BPP, essentially told from the party’s perspective, which will certainly draw criticism from those contesting the violence and political legacy of the party, but Black Against Empire will likely remain a focal point of BPP scholarship for the foreseeable future.