This Is How Racist America Was During the Civil War

Alan Singer is a historian and Professor of Secondary Education at Hofstra University, author of "New York and Slavery: Time to Teach the Truth" (2008), and editor of the "New York and Slavery: Complicity and Resistance" curriculum that received the 2005 National Council for the Social Studies program of excellence award.  This piece was written with research assistance from Joseph Palaia, graduate student, Hofstra University. 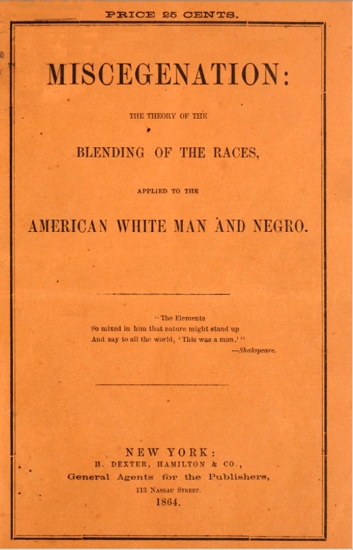 During the Civil War, many New York City newspapers were closely aligned with the anti-war, pro-Southern wing of the Democratic Party. Republicans called them "Copperheads" after the venomous snakes that originate in the area that had become the Confederacy. Their hatred of Abraham Lincoln was probably only surpassed by their virulent racism and hatred of Black Americans. Their pages were filled with racially offensive language that would be blipped out on the Daily Show with Jon Stewart and most newspapers today are hesitant about printing. I use the word "nigger" in this op ed. I do not use it lightly and I will only use it when quoting directly from newspaper articles from the era. I do not believe it is possible to convey the depth of racism in Northern society during the Civil War era without using this inflammatory and defamatory term.

In 1864 the Daily News was accused of receiving payments from Confederate agents to promote anti-war rallies in New York City and it inflamed racial tension by claiming that racial mixing or miscegenation was the "doctrine and dogma" of the Republican Party. The editorial page of the Weekly Day-Book, which from October 1861 to October 1863 was known as The Caucasian, carried the banner "White Men Must Rule America."

In the months leading up to the July 1863 Draft Riots, John Mullaly, editor of the Roman Catholic Church's newspaper, Metropolitan Record, called for armed resistance. At a Union Square rally May 19, 1863, Mullaly declared "the war to be wicked, cruel and unnecessary, and carried on solely to benefit the negroes, and advised resistance to conscription if ever the attempt should be made to enforce the law." Following the July Draft riots, Mullaly was indicted for "inciting resistance to the draft."

In its August 23, 1863 issue, the Herald, which had the largest circulation in the country, predicted that the Republican Party would eventually nominate and unite behind Abraham Lincoln when it realized he was the person "predestined and foreordained by Providence to carry on the war, free the niggers, and give all of the faithful a share of the spoils." On October 7, 1863, the Herald described the Ohio gubernatorial election as a battle to decide "whether the copperheads or the niggerheads are more obnoxious to the great conservative body of the people."

The 1864 Presidential election provided the Copperhead press an opportunity to express open, casual, and nasty racism. A key figure was journalist David Goodman Croly, who at one time or another worked for the New York Evening Post, the Herald, and the World. Croly helped to anonymously produce one of the more avowedly racist attacks on Republicans and African Americans produced during the Civil War, a 72-page pamphlet titled "Miscegenation: The Theory of the Blending of the Races, Applied to the White Man and the Negro." The pamphlet charged that the Civil War was a war of "amalgamation" with the goal of "blending of the white and black," starting with the intermixing of Negroes and Irish.

Many newspapers, including the World, argued the pamphlet was the work of abolitionists and represented their actual program, rather than an attempt to undermine abolition. The New York Freeman's Journal & Catholic Register, a "peace at any cost" Democratic Party newspaper closely aligned with Fernando Wood, claimed that the "beastly doctrine of the intermarriage of black men and white women" had been "encouraged by the President of the United States" and that "filthy black niggers" were mingling with "white people and even ladies everywhere, even at the President's levees."

The editors of the New York Times, were eventually sucked in by the fraud. In a March 19, 1864 editorial, they wrote, "We regret to learn from numerous sources that we are on the point of witnessing intermarriage on a grand scale between the whites and blacks of this Republic. It has, as most of our readers are aware, been long held by logicians of the Democratic school, that once you admit the right of a negro to the possession of his own person, and the receipt of his own wages, you are bound either to marry his sister, or give your daughter in marriage to his son. The formula into which this argument has always been thrown was this: If all blacks are fit to be free every white man is bound to marry a black: 'Niggers' are blacks: Therefore every white man is bound to marry a 'nigger.’ "

A week later, on March 26, 1864, a Times editorial stated: "we have no hesitation in saying that if we had at the outset conceived it possible that hostility to Slavery would ever have led to wholesale intermarriage with negroes, or of all marriageable Republicans and their sisters, that party should never have received any countenance or support from this journal. We owe it to ourselves and posterity to say that the odious matrimonial arrangements, into which so many of those whose opinions on certain great questions of public policy we have hitherto shared, have taken us wholly by surprise."

By March 30, 1864 the Times had realized it was a victim of a hoax. "Trusting entirely, as we stated at the time, to the assertions of the Copperhead press, we have made mention of sundry movements alleged to be in process for the more wide-spread diffusion of the new political gospel of Miscegenation . . .  [T]he Copperhead newspapers have been spreading false reports, which is scarcely conceivable." However, not only did the paper not apologize for its racism, but it complained "[t]he Copperheads are responsible for this state of things. They have aroused the whole colored community, by their highly-colored pictures of the connubial fate that awaits them at Republican hands, to a state of intense excitement."

Given the virulent racism of the anti-war Copperhead Democrats and the still open racism of both the pro-war Democrats and Unionist Republicans in New York City and the north, it is amazing that slavery in the United States ended at all. Emancipation was a tribute to the doggedness of abolitionists, Black and White, the need for Black manpower for the North to win the war, and major miscalculations by Southern secessionists who mistakenly exaggerated Northern opposition to slavery and support for Black rights.