Is This How We're Going to Learn Queer History in the Future?

Sarah Prager is the creator of the Quist mobile app, a free resource about LGBTQ history available to download on Apple and Android devices. She currently travels the country speaking on LGBTQ history’s relevance today. More information is available by visiting www.sarahprager.com. She lives in Maryland with her wife. Parts of this essay first appeared in QED: A Journal in GLBTQ Worldmaking (Volume 1, Issue 2). 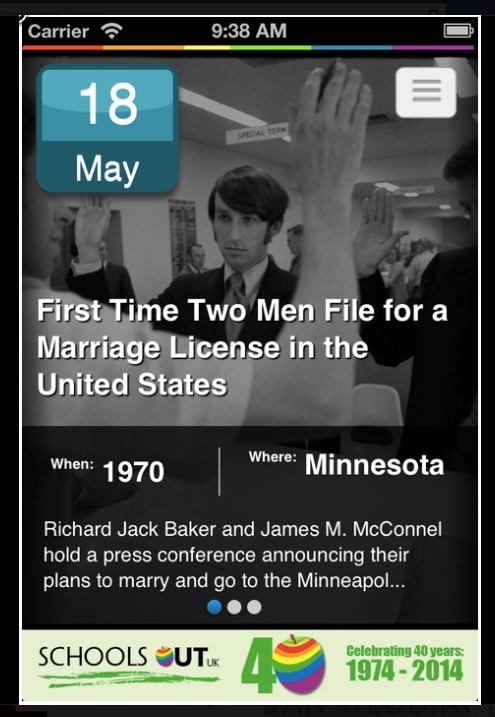 When I was coming out as a lesbian in 2000 at the age of fourteen, I turned to the stories I found from LGBTQ history for a sense of community. The stories showed me that I wasn’t the first to have these feelings – that I wasn’t alone. When you read a love letter between two men from two hundred years ago, it reads just like it was from this week – struggles with coming out, confusion over being different, and a passionate affection for each other.

Bringing this gift of normalization to the next generation is why I created the Quist mobile app one year ago. Quist (short for “queer history”) displays these stories on iOS and Android smartphones and tablets. The 800 Quist stories range from examples of LGBTQ individuals making significant contributions to society (Nobel prizes, firsts in their field, Olympic medals, publishing works of literature) to watershed legislation (countries criminalizing or decriminalizing sodomy, banning or passing same-sex marriage) to famous icons coming out. Nothing is held back – Executions and hate crimes against LGBTQ people are included along with the positive.

When you scroll through the historical events of the day in Quist, you can see the positive overall trend. For example, if you open up the app on July 28, you’ll be able to swipe through a few different events that happened on this day. One is from July 28, 1540, when the first person was executed in the U.K. under the Buggery Act of 1533 (the baron Walter Hungerford was beheaded). But one of the other events you’ll see as you go through the chronological events is that on July 28, 2011, the parliament of Serbia approved a law causing the national health insurance to subsidize sex reassignment surgery. There are positive stories from centuries ago and tragic ones from recent years, but daily viewing of the app gives the user a sense of how the global culture became vastly more accepting decade to decade.

As the way the masses consume information changes, we must change the way we distribute information. People are getting used to reading the news as quick headlines with short blurbs that deliver the facts in scannable text on a screen. Whether this is good or bad is debatable, but whether it is true is not. Quist delivers historical information in this format, with links to more information after the blurb for readers who want to take their learning deeper. I believe history shouldn’t only be in physical spaces like libraries and museums – If we want people to learn it, we need to make it available in ways for every learning style, every age, and every location.

People have responded positively to learning history via this medium. In the first year of availability on the Apple and Android app stores, almost 18,000 people downloaded Quist. Two-thirds of the downloads came from the U.S., and the others were spread across 100 other countries, including several where LGBTQ information is difficult or dangerous to access such as Russia, Pakistan, Nigeria, Jamaica, Iran, Ghana, Serbia, Honduras and Kenya. These numbers were humanized for me by the emails, tweets, and comments I received. One woman told me by email that “it moved [her] to tears to see that our stories were not completely lost.” A man’s email said “I can't tell you how grateful I am each morning to see our history...I am in awe each morning.”

Quist has come a long way in our first 12 months, including the addition of new functions like a keyword search option and content translations to world languages. This project has even taken me to the White House, where I participated in the first-ever LGBT Innovation Summit earlier this month. LGBT history is an area on the rise, from the National Park Service committing to an initiative to register LGBT historic sites to Wells Fargo unveiling a LGBT history mural in a California branch. There are museums, archives, art exhibits, blogs, books, wikis, documentaries, and more for learning LGBT history, where a couple of generations ago there wasn’t much. LGBT people were certainly making history then, but our preservation and celebration of it is at an all-time high.