Why Do We Have an Illegal Immigration Problem from Central America? We Should Know. We Helped Create It.

William Schell, Jr. is a professor of history at Murray State University in Kentucky. 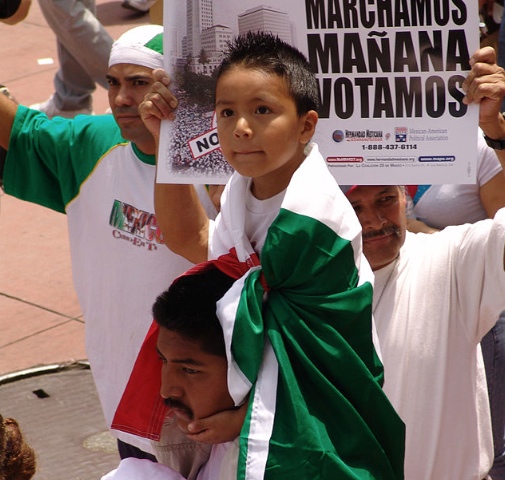 By now we have all heard and read of the expediential growth in Central American refugees fleeing to the US which has evolved, almost overnight, into a form of human trafficking. Why would a 15 year old girl set off on her own enduring unspeakable hardship and abuse to get to America? Why would families sell everything in order to pay people smugglers to bribe border guards and slip them past checkpoints to the US border where they often simply turn themselves in?

First the Push factors--the collapse of government and the rule of law in Honduras, Guatemala, and El Salvador and the rise of gang rule. Gangs seize children with family in the US and hold them until the relatives pay up. In addition to this ransom, families must pay smuggling charges.

And the Pull factors—children wish to join parents while smugglers (who charge for their services) put out the word that the US allows illegal migrant children to stay if they make it across the border and turn themselves in.

The current US policy—for which the Obama Administration is taking the heat—has bi-partisan origins in the 2007 immigration reform law originally backed by many conservatives including Sen. John McCain of Arizona.  But now McCain and other Republicans, pressured by Tea Party radicals, oppose the very law they called for and created.

Shortly after the passage of the law, the plight of these migrant children was told in HBO’s "Which Way Home" (2009) directed by Rebecca Cammisa. The film "followed several unaccompanied child migrants as they journey through Mexico en route to the U.S. on a freight train they call "The Beast." It tracks the stories of children like Olga and Freddy, nine-year-old Hondurans who are desperately trying to reach their families in Minnesota, and Jose, a ten-year-old El Salvadoran who has been abandoned by smugglers and ends up alone in a Mexican detention center, and focuses on Kevin, a canny, streetwise 14-year-old Honduran, whose mother hopes that he will reach New York City and send money back to his family. These are stories of hope and courage, disappointment and sorrow.”

"Which Way Home" is a must see for anyone who wants to understand the current crisis.  The child immigrant problem is rooted in US Cold War Policies that fueled civil wars in Central America which displaced thousands in Guatemala, Honduras, and El Salvador.  Illegal Central Americans then came to the US where there arose social networks that soon evolved into MS-13, the 18th Street Gang, and other street gangs that financed themselves selling drugs. The US law enforcement then acted to arrest and deport gang members, thus turning what had been local-regional gangs into transnational criminal organizations which now traffic humans as well as drugs.

Thus the very policy being proposed by congressional conservatives to “solve” the problem (deportation) was/is a major contributor to its creation.

According to Central American migration researcher, David Bacon “media coverage focuses on gang violence in Central America, as though it was spontaneous and unrelated to a history of U.S.-promoted wars and a policy of mass deportations. In truth, the United States’ meddling foreign policy and a history of the U.S.’s own harsh immigration measures are responsible for much of the pressure causing this flow of people from Central America.”

But while almost all of the reporting and commentary on the immigration crisis has focused on the now, the roots of that now lie in the informal Central American empire created in the early 20th century by American investment in plantations, ports and railroads. The classic example is the United Fruit Company known as la frutera which dominated Guatemala. When nationalists sought greater control of their own affairs, American muscular Dollar Diplomacy removed them and supported compliant dictators backed by US trained “national guards.” This is how the Somoza “dynasty” of Nicaragua came to power.

After WWII, as Cold War anti-communism came to define US foreign policy, Jacobo Arbenz came to power in Guatemala.  When in 1954 Arbenz’s reformist, socialist government took and paid for United Fruit Co. properties to enact a land reform, the CIA overthrew him in what was dubbed “Operation Success” (planned and executed by E Howard Hunt of Watergate infamy). It should come as no surprise that major UFC stockholders were John Foster and Allen Dulles, respectively US Sec. of State and head of the CIA.

Fearing the spread of communism, Washington trained Central American officers at the School of the Americas at Fort Benning, Georgia, to protect elite interests.  Upon return to their home countries, they organized the paramilitary “death squads.” In El Salvador there was La Mano Blanca (the white hand) and ORDEN.  In Guatemala peasants were equated with Communists and simply eliminated by the thousands. All of this with Washington’s tacit acceptance, if not outright support.

When in 1972 in Nicaragua an earthquake destroyed nearly 90% of the capital of Managua the ruling Somoza family, America’s major regional ally, siphoned off relief money and sold plasma and other medical relief supplies on the black market, provoking a general uprising supported by even the upper classes. The revolution was followed by fair elections that brought a mixed government to power dominated by the Communist Sandinistas just as Ronald Reagan became president.  To depose the Sandinistas Reagan funded the CONTRAS, composed of former Somoza military members.

In 1983, the U.S. Congress prohibited funding the Contras. But the Reagan administration continued to do so covertly and illegally by selling arms to Iran and channeling the proceeds to the Contras (the Iran–Contra affair). Despite Washington’s attempt to overthrow Nicaragua’s Sandinista government, in 1990 it held free and fair elections. Proof? The Sandinistas lost to an opposition coalition led by Violeta Chamorro.

But Reagan’s effort to depose the Sandinista government spread war throughout Central America—especially El Salvador where ORDEN’s leader and presidential candidate, Roberto D’Aubuisson, arranged the assassination of Archbishop Oscar Romero after Romero called on the military to "Stop the repression! No soldier is obliged to obey an order contrary to the law of God."

When the Cold War ended, the damage done by Washington’s policies led to rapacious dictatorships that wrecked the governments and economies of Guatemala, Honduras and El Salvador opening the way for the rise of American-linked gang rule by extortion from which the people fled.

And so we return to where we started. Why do we have an illegal immigration problem? We are merely reaping what we have sown.