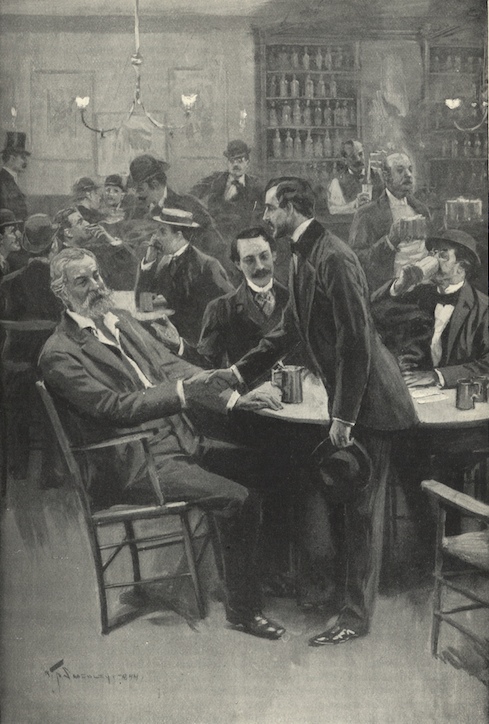 Between roughly 1858 and 1862, Walt Whitman spent almost every night hanging out in a dingy Manhattan saloon. Yes, it’s true: America’s representative bard was also a barfly. Pick up any book on Whitman, however, and invariably only a few pages are devoted to his time at the celebrated Pfaff’s saloon, often less. Despite the sheer volume of Whitman scholarship, conducted over more than a century, this chapter in the poet’s life tends to get short shrift. There’s a tendency, it seems, to view this as conduct unbecoming a serious poet. One modern biographer dismissed this as “a very obscure period in Whitman’s life.”

In fact, those four years were a vital stretch for the poet, filled with triumph and torment and intense creativity.  This was an extraordinary period when Whitman grew as both as an artist and as a person. Most significantly, one cannot discount the role a saloon played in all of this. 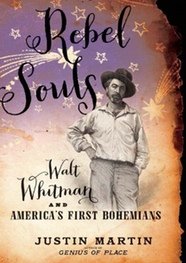 When Whitman first started frequenting Pfaff’s, he was nearing 40, unemployed, and living at home in Brooklyn with his mother. He had not published a single poem in two years. Pfaff’s provided Whitman with a sense of artistic fellowship, at a time when this was desperately lacking in his life.

Pfaff’s was a subterranean saloon (at basement level, that is) located at 647 Broadway in Manhattan. It featured a little alcove set off from the main room. The alcove had a low vaulted ceiling and was outfitted with a long table capable of seating roughly 30 people. This was the meeting place for a collection of talented but eccentric Bohemian artists. Henry Clapp Jr., a lapsed temperance lecturer, always sat at the head of the long table. Nicknamed “King of Bohemia,” he was the group’s leader.

Clapp’s court included Fitz Hugh Ludlow, Artemus Ward, and Ada Isaacs Menken. Ludlow was a psychedelic pioneer and author of the Hasheesh Eater, one of the best-selling books of 1857. Ward, America’s first stand-up comedian, would later become a friend of – and significant influence on – a young Mark Twain.  As for Menken, she achieved international celebrity for a risky and risqué equestrian act.

Whitman was thrilled to join Clapp’s colorful salon. “I think there was as good talk around the table as took place anywhere in the world,” he would later say. Beyond that, the Bohemians regularly shared their works-in-progress. Members of the circle read from their unfinished plays and novels, would even bring in paintings and sculptures for critique. At a time when Whitman was adrift professionally, he valued being part of a salon. “Sometimes he would read to us peculiarly constructed verses since become famous, and sometimes he would give us the manuscript to read,” one of the Bohemians recalled.

For Whitman, however, the artists’ circle was only part of Pfaff’s appeal. Indeed, he spent about half his time at Clapp’s long table. Otherwise, Whitman could be found in the saloon’s main room. Pfaff’s had a wild and welcoming atmosphere that drew not only Bohemian artists, but assorted other rebels and societal outliers. In an era when such matters were not so clearly defined and delineated, the saloon was a popular hangout for gay men. Whitman referred to the men he met there as “my darlings and gossips” and his “beautiful boys.” In the future, just as he waxed nostalgic for the witty banter at Clapp’s table, he would also have fond memories of this other clique, recalling  “our meetings together, our drinks & groups so friendly, our suppers with Fred & Charley Russell &c., off by ourselves at some table, at Pfaff’s off the other end.”

The two sections of Pfaff’s appear to have served separate social needs for Whitman – as a poet and as a gay man. Small wonder that nearly every evening Whitman was willing to make a six-mile round trip from his home in Brooklyn, requiring travel by foot, ferry, and omnibus. Even so, being unemployed left him ample time during the day to write poetry. The Pfaff’s years represent a creative cloudburst for Whitman, a time when he wrote more than 100 new poems. Some were notably darker in mood than his earlier efforts, suggesting the influence of his Bohemian circle, distinguished by a fixation on all things bleak and morbid. And some of the poems dealt with bold and controversial themes such as sex and romance between men – a nod to Whitman’s other circle at Pfaff’s.

As it happened, besides being the Boho leader, Clapp was also editor of a journal called the Saturday Press. For a brief period – from its inception in 1858 to its demise in 1860 – it was one of the most influential publications in America. Articles that ran first in the Saturday Press were often reprinted in as many as 200 newspapers around the country. “It is not too much to say that it was nearly as well for one to be accepted by the Press as to be accepted by the Atlantic, and for a time there was no other literary comparison,” according to William Dean Howells, a frequent contributor.

It was quite a coup, then, when Clapp published a new Whitman poem in the December 24, 1859 issue of his journal. The title: “A Child’s Reminiscence” (Whitman would later rechristen it “Out of the Cradle Endlessly Rocking”). This was the first poem Whitman had published in nearly four years, and it created an immediate sensation across America. Shortly afterwards, he received a letter from Thayer & Eldridge, a Boston book publishing firm.  “We want to be the publishers of Walt. Whitman’s poems,” the letter began. “Are you writing other poems? Are they ready for the press?”

The answers to those questions: yes and yes. By the summer of 1860, Thayer & Eldridge had rushed to press with the landmark third edition of Whitman’s masterpiece, Leaves of Grass. It was vastly expanded from the previous two editions. Where they had featured 12 and 32 poems, respectively, this one contained 146 poems, many drawing on Whitman’s time at Pfaff’s saloon. But one thing remained consistent: Whitman continued to garner few reviews, mostly filled with puzzlement and derision. Typical is one from the Boston Wide World: “Why, these ‘poems’ (prose run crazy) are the veriest trash ever written, and vulgar and disgusting to the last degree.”

With Whitman getting slammed by the critics, Clapp stepped in yet again. He filled his influential Saturday Press with items about Whitman, and enlisted various members of the Pfaff’s circle to write essays, bits of gossip, and appreciations of the poet. Clapp even ran three separate reviews of Leaves of Grass in his journal. “Henry Clapp stepped out from the crowd of hooters – was my friend: a much needed ally,” Whitman would recall.

The King of Bohemia emerged as the controversial poet’s great champion. Due in no small measure to the Saturday Press’s tireless promotion, the 1860 Leaves of Grass was the breakout edition, outselling the previous volumes, and setting the poet on his future course.

Even so, many years would pass before Whitman achieved fame. By then, he was a much older man, in a much different guise. Rather than Bohemian Barfly, he had transformed into the Good Gray Poet, a beloved cultural icon in late-nineteenth century America. Contemporary writers outdid themselves describing his bushy beard, twinkling blue eyes, his wisdom, calm, and kindness. In talking to his myriad chroniclers, Whitman always took a special relish in dropping little breadcrumb clues. And so it was that he told one of his earliest biographers: “Pfaff’s ‘Bohemia’ was never reported, and more the sorrow.” In response, the biographer dutifully covered those four years in a few quick paragraphs, an enduring pattern to this day.

But Whitman knew – even if the world didn’t – how important a subterranean saloon was to his transcendent poetry.