David Williams is a professor of history at Valdosta State University and the author of the, “I Freed Myself: African American Self-Emancipation in the Civil War Era” (Cambridge University Press, 2014). 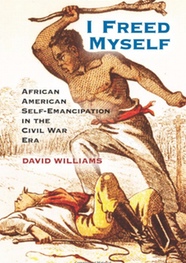 I remember reading many years ago W. E. B. Du Bois’s complaint that Americans knew far too little of the decisive role blacks played in winning their freedom.  He pointed specifically to a biography of Ulysses S. Grant in which the author, W. E. Woodward, wrote of African Americans as “the only people in the history of the world . . . that ever became free without any effort of their own. . . . They twanged banjos around the railroad stations, sang melodious spirituals, and believed that some Yankee would soon come along and give each of them forty acres of land and a mule.”  I was in graduate school at the time and congratulated myself on knowing better – that blacks had served in the Union army.  But that was about all I knew of it. As the proud holder of a college degree in history, I thought that was just about all I needed to know.  There are none so ignorant as the educated ignorant.

Some historians still downplay the wider role of blacks in bringing on freedom, preferring to emphasize Abraham Lincoln’s role as the Great Emancipator.  Historian James McPherson, a leading defender of Lincoln’s Great Emancipator image, argues in Drawn with the Sword: Reflections on the American Civil War (1996) that without Lincoln there would have been no war and, hence, no opportunity for freedom. With regard to emancipation, it was Lincoln’s determination that was “the essential condition, the one thing without which it would not have happened.” Without Lincoln, there would have been no Emancipation Proclamation and no Thirteenth Amendment. Therefore, says McPherson, “Lincoln freed the slaves.”

Arguments such as those of McPherson and others have some validity as far as they go. To my knowledge, no reputable scholar denies that Lincoln and the Union military played a significant part in the emancipation process. But following their lines of reasoning more deeply, we cannot help but see the efforts of black folk at their core.

Lincoln’s effort to preserve the Union was, of course, a reaction to the South’s secession, a movement engineered by slaveholders who feared not only Lincoln but, more immediately, their own slaves. Controlling slaves had been increasingly difficult for years. It could only be more difficult, perhaps impossible, with slaves believing that Lincoln’s election meant their freedom. How could they believe otherwise? Though Lincoln was no threat to slavery where it existed, and said so often during the 1860 presidential campaign, fire-eating secessionists railed against him as a radical abolitionist with a secret agenda to foment slave rebellion. Such overheated rhetoric was intended to stir up support for secession among southern whites, but southern blacks heard the message too. Rebellion and rumors of rebellion pervaded the South that year and drove slaveholder fears to a fever pitch. Most significantly, underlying their fear was the certain knowledge that slaves wanted freedom. It was that fear, born of generations of slave resistance, that led to secession, war, and slavery’s downfall.

Slaveholders’ doubts about their ability to maintain slavery indefinitely had a long history. The need to justify slavery had for decades occupied their brightest minds. The need to keep southern whites, three-quarters of whom owned no slaves, supporting slavery made fomenting fear of blacks a political priority.  Most threatening to slaveholders were the slaves themselves. Blacks had never submitted to slavery willingly or completely. They did little more than they had to do and took liberties where they could. They resisted in so many ways that the slaveholders’ need to exercise control was constant and consuming.  Had blacks been content to remain enslaved, slaveholders would have had no cause for alarm. Nor would abolitionist arguments have inspired such panic among them. As it was, slaveholder fears of threats to slavery, as much from within as from without, led them to insist on guarantees for slavery’s future and the means to control that future. And that fear led them to secede when those guarantees and their means of control seemed at risk. As Professor John Ashworth reminds us in Slavery, Capitalism and Politics in the Antebellum Republic (1995), there was a direct causal link between the slaves’ desire for freedom and slaveholder politics. “Behind every event in the history of the sectional controversy,” Ashworth points out, “lurked the consequences of black resistance to slavery.”

That resistance was not confined to the South. Escaping slaves saw to that. By the tens of thousands they headed north, undermining northern efforts to keep the slave’s war south of the Mason-Dixon Line. In so doing, as Professor Scott Hancock stresses in “Crossing Freedom’s Fault Line” (Civil War History, 2013), black folk “maintained an unrelenting pressure on the sectional fault lines of identity, law, and space.” That pressure produced large cracks in those fault lines and increasingly drew northerners into the conflict. Time and again, northern failures to keep blacks and slavery locked in the South put them at odds with slaveholders’ expansionist demands. Hancock concludes, and rightly so, that “not simply slavery, but slaves – black people! – caused the Civil War.”

It was, then, at the heart of it all, the unrelenting resistance to slavery among slaves themselves that was the essential condition, the one thing without which the sectional crisis, secession, the Civil War, the Emancipation Proclamation, and the Thirteenth Amendment would not have happened.

Of course, it did not happen overnight. For more than two centuries before the Civil War, millions of African Americans lived in bondage all their lives. But it was a resisted bondage, an ongoing struggle, that would eventually reach its consummation. The internal pressures against slavery – rebellion, resistance, escape – were always there and became ever greater as slavery spread. Slaveholders clamped down with more slave codes, more slave patrols, and increasingly brutal control. But the more they tried to tighten their grip on slaves, the more slaves slipped through their fingers. By the late 1850s there were an estimated fifty thousand escapees annually, temporary and permanent. Such resistance fueled a desperation reflected in slaveholder politics and the secession crisis. The resulting war was neither an isolated event nor an end point in itself.  It was part of a massive black resistance movement that had been going on for generations, finally becoming so intense that the country as a whole could hardly help being drawn into it.

Even so, in an effort to avoid war, Congress passed, and Lincoln supported, a constitutional amendment, the Corwin Amendment, that would have guaranteed slavery in the slave states forever.  In the war’s early months, both Congress and Lincoln insisted that the conflict was a white man’s war in which blacks could have no part. But black folk knew the war was theirs and quickly took ownership of it.  Black resistance largely brought on the war, then pressed Lincoln in the direction he eventually went.  By escaping in the tens of thousands and making freedom a fact, blacks forced Lincoln to recognize that fact with the Emancipation Proclamation. They made the document their own, and made it much more that it was.  In the upper South, where the Proclamation did not apply, blacks claimed freedom anyway.  In the lower South, they made freedom real by aiding escaping slaves, serving the Union army as guides and spies, assisting Confederate deserters and armed deserter gangs, giving aid to escaping Union prisoners, resisting abuse, and engaging in open rebellion.  They established freedom for themselves by traveling at will, threatening escape to secure wages, and even claiming land and property when they could.  Still, most Americans today seem to assume that Lincoln, almost single-handedly and of his own volition, “freed the slaves.”  Certainly most students coming into my freshman U.S. history course assume that to be the case, which is in large part what prompted me to write my book, I Freed Myself.

In the war’s aftermath, although whites willfully ignored the wartime role of blacks, memories of self-emancipation efforts remained clear in the minds of black folk.  One day a candidate for local office in Illinois asked Duncan Winslow, a former slave and Union veteran, for his vote in an upcoming election. As if to seal the deal, the candidate told Winslow, “Don’t forget. We freed you people.” In response, Winslow raised his wounded arm and said, “See this? Looks to me like I freed myself.”  Blacks would go on freeing themselves for generations to come.