Shia and Sunni Have Been at Each Other’s Throats for a Thousand Years? Architecture Shows this Isn’t True.

Stephennie Mulder is Assistant Professor in the Department of Art and Art History at UT Austin. This essay comes from her new book, "The Shrines of the ‘Alids in Medieval Syria: Sunnies, Shi’is and the Architecture of Coexistence." This post originally appeared on NOT EVEN PAST. 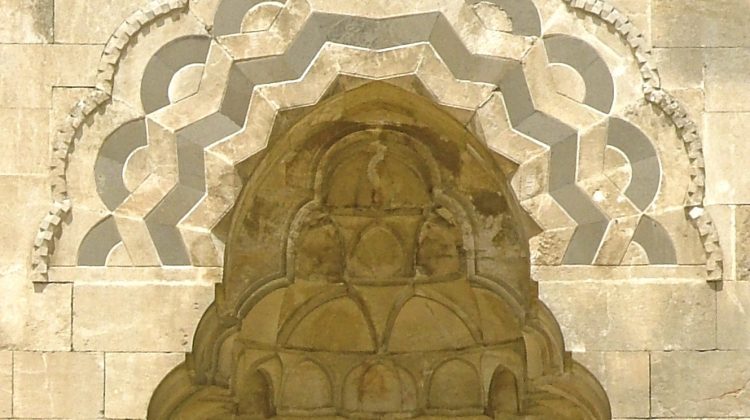 Syria – birthplace of civilization, home of the first alphabet and the earliest cities, land that bears the spectacular architectural imprint of empires from the ancient Hittites, to Alexander, to Rome, to the Ottomans  – is now a country synonymous with civil war, fanaticism, and unspeakable brutality. The stories coming out of contemporary Syria are horrifying and heartbreaking, and, we’re often told, have their roots, in part, in a primeval sectarian conflict between Islam’s two main sects, the Sunnis and the Shi’is.Sectarian conflict, it is said, has raged for 1,400 years, since the founding of Islam in the 7th century.  This truism is usually accepted uncritically by the media, is common in popular discourse about the Islamic world, and, as we’ve seen in recent months, is also one embraced by violent extremist groups like the Islamic State (IS), who use it to justify heinous acts of cruelty against minority groups. But it’s worth pausing for a moment to imagine how it would look if a similar narrative were applied elsewhere: if today’s tensions between, say, Turkey and Europe were said to stem from an ancient conflict between the Holy Roman Emperor Charlemagne and the Byzantine Empress Irene. Attributing modern sectarian conflict in the Middle East to events that transpired in the 7th century is every bit as nonsensical. 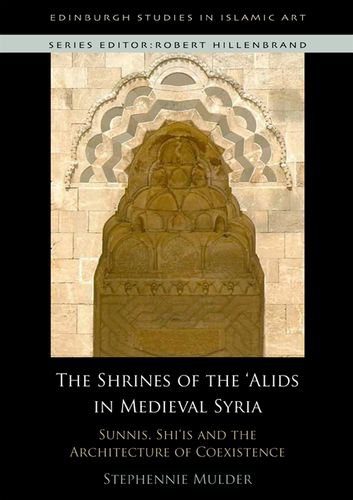 One reason for the continuity of this narrative of unending conflict is that it’s a tale frequently told in the medieval Arabic texts themselves. In this version, the key moment was the Battle of Karbala in Iraq in AD 680, when Sunnis martyred al-Husayn, the grandson of the Prophet Muhammad and leader of the early group of Shi’i partisans, and took his head and his family members in chains back to Damascus, capital of the triumphant Sunni Umayyad Caliphate.  The Sunnis prevailed and the Shi’is became a persecuted minority, devoted to the Prophet’s family, which they marked by the proliferation of a culture of shrine building and veneration. Another pivotal episode in this text-based narrative occurred between the 11th and 13th centuries. The Arabic sources call this the era of “Sunni Revival,” for it saw the demise of the last Shi’i caliphate and the final entrenchment of Sunnism as the predominant sect in most regions of the Islamic world.

But architectural historians don’t rely only on texts alone, and in this case, the history of architecture in Syria reveals a somewhat different tale. If we let the buildings speak, some vivid contradictions to the familiar narrative arise. For example, we learn that the period of Sunni Revival in Syria was, counterintuitively, the one in which the largest number of “Shi’i” shrines were built, some 40 of which survive into the contemporary period. And, we find that these “Shi’i” shrines were endowed, patronized, and visited by both Sunnis and Shi’is: in many cases, by some of Islam’s most illustrious Sunni rulers. Far from being vanquished during the Sunni Revival, Shi’ism may well have been the dominant sect in northern Syria in the 11th-13th centuries.  Although episodes of conflict are certainly part of the sectarian history of Islam, it would seem there’s another tale too. Looking at architecture reveals an equally important past marked by cooperation and accommodation. 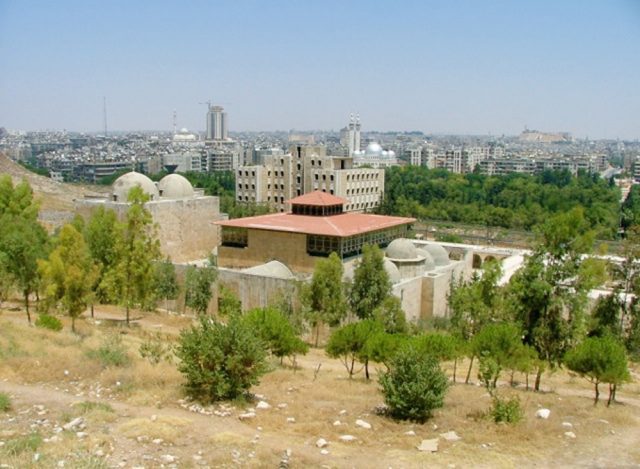 Let’s take as an example a shrine in northern Syria and read it through the eyes of an architectural historian. The building in question is the Mashhad al-Husayn, dedicated to the Prophet’s martyred grandson, who was also one of the Imams, the perfect and infallible religious leaders of the Shi’a. On aesthetic grounds alone, the Mashhad al-Husayn is one of the most spectacular buildings of the 12th-13th centuries, but despite its magnificence, it has rarely been studied. Imagine for a moment that Chartres Cathedral had been largely ignored by architectural historians, and you’ll get a sense of how peculiar this is. The reason probably has something to do with the fact that the standard, conflict-driven narrative had no room for the construction of such a monumental “Shi’i” building during the era of Sunni revival. 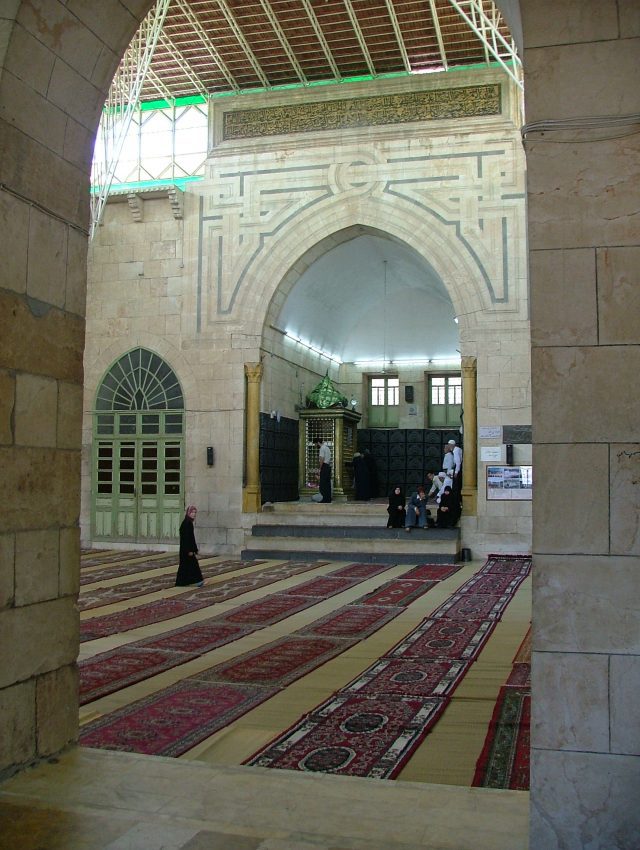 The story of this shrine begins in the year 1177, when a shepherd sat on a high hill overlooking the medieval city of Aleppo in northern Syria. His name was Abdallah and he was from a poor neighborhood of immigrants. Abdallah had just returned from the noon prayer at the mosque and, from his perch in the warm sun atop the mountain, he could see his sheep and hear their tinkling bells as they cropped the green shrubs and yellowing grass that grew down the hillside. On the horizon, inside the stout medieval walls newly rebuilt by the son of the great Saladin – the Sunni Muslim general who would soon recapture Jerusalem and evict the Crusaders from the Holy Land – the towering mass of the ancient fortified Citadel shouldered its way toward the sky. Below the Citadel, the vast, labyrinthine suq (market) sprawled for miles in colorful, chaotic splendor under shady, vaulted-stone passageways, testimony to Aleppo’s long history as a vibrant and cosmopolitan trade entrepôt, a key terminus of the Silk Route that linked China to the ports of the Mediterranean.

In the heat of the afternoon, Abdallah began to doze off. As he slipped into a dream, he had a strange vision. Nearby, a man emerged from a cleft in the rock and ordered in a commanding voice: “Tell the people of Aleppo to build a shrine here and call it the Mashhad al-Husayn (a grandson of the Prophet Muhammad)!” Abdallah awoke, and, awestruck at the miraculous vision, dropped his shepherd’s staff and ran to the suq, where he began recounting the miracle and exhorting the city’s inhabitants to come build a shrine. Excited crowds quickly gathered and, inspired by the vision of the humble shepherd, organized themselves for the task. Within days, groups of volunteers were created, workdays were assigned, and soon, the merchants of Aleppo had arranged a surcharge on their goods to provide funding for the project. Not long afterwards, the shrine gained some more illustrious patrons. The mayor of the city of Aleppo himself built an elaborate portal and, a few years later, in 1196, that portal was torn down and replaced by an even more spectacular one built by Aleppo’s Sunni governor, al-Malik al-Zahir, the son of Saladin. Thus, even the Arabic textual sources reveal much that complicates the narrative of perpetual conflict. We learn, for example, that the shrine was an intra-sectarian project, and that it was built by elites and commoners alike. What more can we deduce using the methods of an architectural historian? 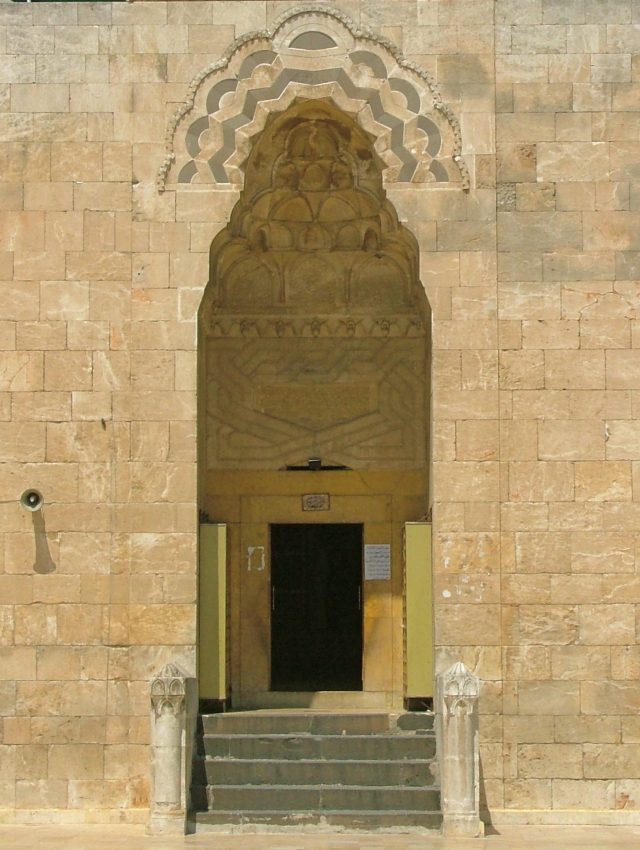 We can begin by observing some formal elements of the building. The portal built by al-Zahir was higher and taller than almost every other medieval architectural portal in Syria and it was ornamented with a particularly exquisite kind of radiating, inlaid-stone interlace pattern on the outer face, married with a complex type of three-dimensional, interlocking, faceted stone ornament called muqarnas on the interior. In other words, al-Zahir’s portal was a monument meant to awe and astonish. Above all, it was something that the Sunni ruler, al-Zahir, was proud to sponsor and build alongside the Shi’i residents of Aleppo, and as if to confirm this, he emblazoned his name over the entrance on a large, square foundation plaque. Thus we can already see that al-Zahir wanted to emphasize that through the process of its construction and ornamentation, the Mashhad al-Husayn became not a “Shi’i shrine,” but rather a monument to pragmatic cooperation centered on a sentiment shared by both sects: reverence for the Prophet’s family. Indeed, as if to drive the point home, al-Zahir left yet another inscription. 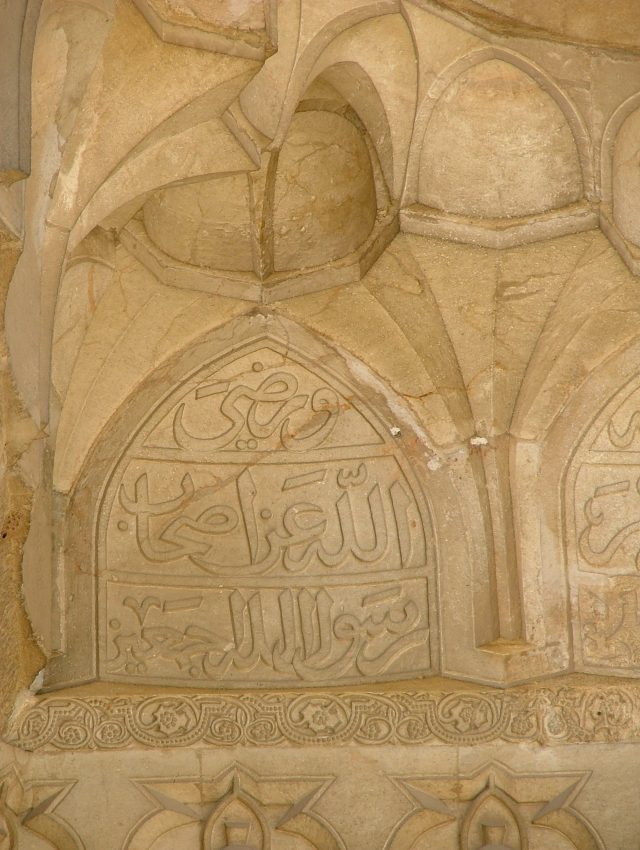 This one wrapped around the portal’s entrance façade and was located just under the heads of visitors entering the shrine. It bore a remarkable message, for it named the twelve Imams of the Shi’a alongside the four Rightly Guided Caliphs of the Sunnis, and, by using calligraphy of similar size and style and directly juxtaposing the two inscriptions, it visually equated the two groups of holy men. At the end, in clear, bold script, he wrote an unambiguously worded entreaty: “May God be pleased with all the Companions of His Prophet.” And with these words, al-Zahir carved in stone a sentiment that powerfully reflects the nuanced, negotiated sectarian history of Islam in Syria and elsewhere in the Islamic world.