When Did Police Start Looking Like Soldiers in a Combat Zone? No, You're Wrong. It Wasn't in the Aftermath of Iraq.

Alex Elkins is a Ph.D. candidate in history at Temple University. 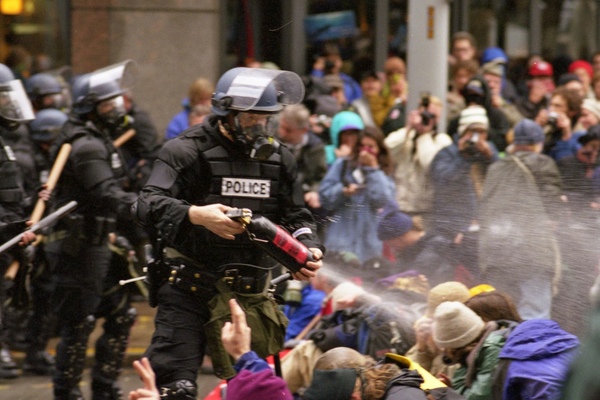 Protests in Seattle at the World Trade Organization 1999

The fatal shooting on August 9 of Michael Brown, an unarmed African American teenager, by Darren Wilson, a white police officer, in Ferguson, Missouri, and the protracted siege of the small St. Louis suburb that followed, have forced a reckoning, there and around the country, with police militarization and its ramifications for American society and African Americans in particular. Many commentators have blamed federal programs launched in the name of the War on Drugs and the War on Terror, which over the last twenty years have funneled billions of dollars in military surplus equipment to state and local police agencies. In fact, the roots of this tragedy—the shooting, the obscenely disproportionate police response, and the turbulence in the streets—lie further back, in the “long hot summers” of the 1960s.

The 1960s urban uprisings helped give rise, by the end of the decade, to the sort of police force we are familiar with today: Special Weapons and Tactics (SWAT) teams, outfitted with body armor, assault rifles, tear gas, night-vision goggles, and so on. The change was dramatic.

In 1967, police departments, altogether, spent $1 million on riot control; in 1969, that number had risen to $22 million. In 1970, Louisiana acquired a tank, which it then used to raid the New Orleans Black Panther Party headquarters. One Michigan town with 7,500 residents secured $1,650 for an infrared scanning device, $1,275 for a surveillance camera, and $2,400 for radio equipment. By 1974, more than 300 departments had obtained a helicopter.

Then, as now, the federal government bankrolled the heavy armaments that departments ultimately adopted. The profound transformation of American policing in the direction of “get-tough” militarism began, however, at the local level—with urban unrest followed by a presidential proclamation. On July 21, 1964, President Lyndon Johnson lumped together the six-day Harlem and Brooklyn uprising, urban street crime, and Ku Klux Klan violence against civil rights workers in the South. “American citizens have a right to protection of life and limb-whether driving along a highway in Georgia, a road in Mississippi, or a street in New York City,” Johnson said, indelibly altering the political possibilities of exploiting local violence.

Over the next four years, Johnson hitched his War on Poverty to a War on Crime that combined community outreach and “get-tough” policing. In 1965, Congress established the Office of Law Enforcement Assistance (LEA) to funnel federal money to state and local police departments to improve training, recruitment, and riot control. In 1968, “law-and-order” politics prevailed with the passage of the Omnibus Crime Control and Safe Streets Act, which provided much more money to the states to be used for law enforcement. Over the next several years millions of federal dollars helped local governments purchase armored vehicles, ammunition, machine guns, helicopters, surveillance equipment, and tear-gas grenades.

Long before they purchased their first armored vehicle, however, America’s police forces already embraced a War on Crime. During Prohibition, departments proved their professional mettle by warring on vice and organized crime. Since then, big-city police turned increasingly to dragnet tactics, such as the raid, the roundup, and stop-and-frisk, to solve crimes and clear street corners. In the 1960s, a time when the military analogy began to appear less analogous and more concrete, the police simply escalated existing “get-tough” practices. After the North Philadelphia uprising in August 1964, officers on that beat liked to joke that they were in the French Foreign Legion. Some African American youth in the area, a part of the city already referred to by top brass as “the Jungle,” also did not hide their contempt for “charlie cops.”

Police militarization began locally after the calamitous Watts uprising of August 1965 in which over 20,000 participated, 50,000 watched on the streets, 4,000 were arrested, and 34 people died. In the aftermath, Los Angeles Police Inspector Darryl Gates, the future LAPD chief during the city’s drug wars and the massive 1992 rebellion, drew up plans for what he initially called Special Weapons and Attack Teams. In 1966, the LEA purchased the first helicopter used in police patrol for the L.A. County Sheriff’s office. The following year, the annual convention of the International Association of Chiefs of Police held in Kansas City, Missouri, displayed—for the first time—armored personnel carriers. In 1968, the Virginia State Police purchased six.

Before hosting the 1968 Republican National Convention, Miami Beach, a resort town of 80,000, stockpiled 40 shotguns, 25 flak vests, 10 machine guns, and Chemical Mace. Next door, in Miami, Chief of Police Walter Headley promised a war on African American criminals “who have taken advantage of the civil rights campaign” through vigorous application of the city’s new “stop and frisk” laws, shotgun squads, and the K-9 corps, and warned that “when the looting starts, the shooting starts.” Across the country, city police departments scrambled to adapt military riot control plans that borrowed heavily from counterinsurgency operations in Vietnam
and, with federal money, obtain military equipment—some previously in use overseas.

In the more than 300 urban rebellions from 1964 to 1968, the most militarized forces on the ground were National Guardsmen. Overwhelmingly white and young, and ill-trained in urban crowd control, 1,500 of these citizen-soldiers went to Cincinnati, 2,300 to Newark, and 8,000 to Detroit. In the latter two cities, riding in armored vehicles and carrying rifles affixed with bayonets, they killed dozens of African Americans by unloading hundreds of rounds into residences that they wrongly believed to be snipers’ nests.

As Americans in the 1960s might have phrased it, the police alone play judge, jury, and executioner. And when they do, they abandon their moral and constitutional obligation to preserve due process—even for “suspicious” persons. Militarization, furthermore, did little to keep the peace in Ferguson, instead escalating justifiably angry but peaceful protests into more direct, at times reckless confrontation. In light of the last fifty years and the tragic events of Ferguson, it is time again to rethink what we want from our police.