The Power of Story in Moments of Crisis

by Paul A. Cohen

Paul A. Cohen is a professor of history at Harvard in the Fairbank Center for Chinese Studies. 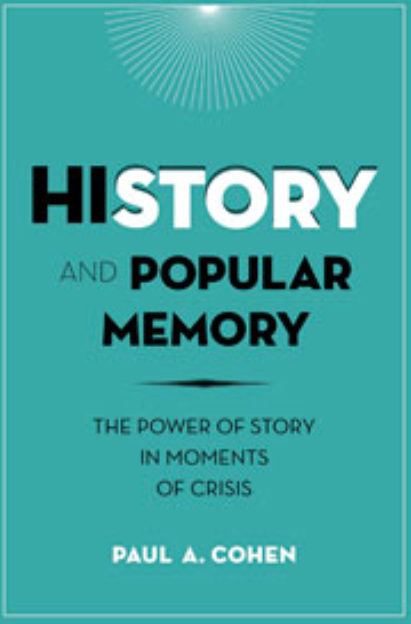 One of the most influential stories that circulated among the Chinese people in the twentieth century was the ancient saga of Goujian, king of the state of Yue, who ruled in the fifth century B.C.E. The Goujian story was about a king who had suffered a humiliating defeat at the hands of a rival state (Wu) but, after years of patient planning and rebuilding, had taken revenge on the Wu king and destroyed his state. The story’s impact was greatest at moments of protracted crisis, such as the mounting tension with Japan in the years leading up to the Sino-Japanese War of 1937-45 and the predicament of Chiang Kai-shek’s beleaguered Nationalists on Taiwan after their defeat by the Communists in the civil war of 1945-49. The story served as a metaphor for the challenges facing Chiang Kai-shek more than two millennia later. What especially intrigued me about this process was the reverberation between story and situation, between a narrative and a contemporary historical condition that prompted those living in it to attach special meaning to that narrative. The right story, in these circumstances, by presenting a model of the world that incorporated a favorable outcome for the crisis, pointed to a more hopeful future.

The part taken by such stories—the ways in which they speak to history—has been compellingly demonstrated in many other societies as well. An example is the story of Joan of Arc, the daughter of a farming family in eastern France, who, during the Hundred Years War (1337-1453), responding to instructions she claimed to have received from God, rallied the French to challenge the English occupation of northern France. During the crisis faced by France in World War II, the two main political leaders of the country, Charles de Gaulle and Philippe Pétain, both strongly identified with Joan even though they were on opposite sides of the conflict. In the hands of a leader such as de Gaulle, the meaning of the Joan story was fairly straightforward: just as Joan of Arc had devoted her brief life to bringing an end to foreign occupation of France in the fifteenth century, de Gaulle led the resistance to the German occupation during the war. Pétain also identified with this core theme in the Joan narrative, but his was a more literal identification: as an ally of France’s German conquerors, the Vichy leader was free to target the English specifically as the object of Joan of Arc’s enmity and to portray himself, because he had made peace with the Germans (thereby saving France from utter devastation), as a Joan-like savior of France in the 1940s.

If the latter identification strikes us today as somewhat strained, it seemed far less so to many French people in the immediate aftermath of the swift German victory in the spring of 1940. In other respects, to be sure, Vichy’s reinvention of Joan of Arc, as an example for French youth in an environment heavily imbued with fascist values and as a model of conventional female domesticity praised more for her sewing than for her military prowess, must have struck a hollow note among many of Joan’s twentieth-century compatriots. Nevertheless, although Vichy’s efforts to align the Joan of Arc story with the Pétain government’s values and goals were forced, to say the least, the fact that the Pétainists saw such alignment as important was in itself of great significance. It spoke to the desirability, shared by many in France at the time, of having Joan of Arc on their side during a moment of serious national crisis, regardless of what she was said to represent.

The interplay between story and history demonstrated in the Goujian and Joan of Arc stories is the rule rather than the exception worldwide. In History and Popular Memory, I deal with these two stories as well as those of four other countries—Serbia, Palestine/Israel, England, and the Soviet Union—each of which, like China and France, faced severe crises during the twentieth century and, in response, appropriated age-old historical narratives that resonated with what was happening in the present to serve a unifying, restorative purpose.

Since the older stories involved never supplied an exact match to what was currently transpiring in history, they were regularly modified to a greater or lesser degree to make the fit closer. This is where popular memory became important. Popular memory—what people in general believe took place in the past—is often a quite different animal from what serious historians, after carefully sifting through the available evidence, judge to have actually taken place. This distinction between memory and history, vitally important to historians, is often blurred in the minds of ordinary folks, who are likely to be more emotionally drawn to a past that fits their preconceptions—a past they feel comfortable and identify with—than a past that is “true” in some more objective sense. This blurring is of course greatly facilitated when, as a result of a dearth of historical evidence or the unreliability of such evidence as has survived, even professional historians cannot know with absolute confidence what occurred in the past. Such is the case with each of the examples explored in the book. But, as I point out again and again, even when there exists a minimum core of certainty about what happened in the past—that Joan of Arc, for instance, was burned at the stake in 1431—the power of the historian’s truth is often unable to compete with the power of the right story, even when (or perhaps precisely because) the latter has been hopelessly adulterated with myth and legend. A major objective of my book is to attain a deeper understanding of why this is so.

But I also see the book as having a larger import. Its focus, rather than being on a particular country or culture, is on a supracultural phenomenon—the part taken by story in popular memory—that, if not global, is certainly encountered in a vast array of places around the world, regardless of the linguistic, religious, social, cultural, and other differences that pertain among the people inhabiting these places. What we have, in brief, is a different sort of world history, not the conventional kind based on conjunctures, comparisons, and influences, but one that is manifested in recurring patterns, clearly bearing a family resemblance to one another, yet independently arrived at and very possibly rooted in certain human propensities—above all, the universality of storytelling in the human experience—that transcend the specificities of culture and place.