Review of Nechama Tec's "Resistance: Jews and Christians Who Defied the Nazi Terror"

Patrick Henry is Cushing Eells Emeritus Professor of Philosophy and Literature at Whitman College. He is the author of "We Only Know Men. The Rescue of Jews in France during the Holocaust" (Catholic University of America Press, 2007) and editor of "Jewish Resistance Against the Nazis" (Catholic University of America Press, 2014). 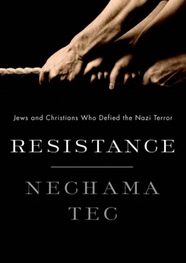 Resistance is the latest contribution from the doyenne of Holocaust studies in America and resistance has been an ever-present theme in her entire scholarly output. Thirty years ago, Tec published her autobiography, Dry Tears. The Story of a Lost Childhood (Oxford UP, 1984), a moving and gripping tale of a hidden child passing as a Gentile who was rescued with her parents by Christian, Polish peasants. A series of important, ground-breaking scholarly books have followed the publication of her initial personal adventure. Only two years later, seeking the motivations of Christian rescuers of Jews in Poland and using input from roughly 565 Polish rescuers, Tec published her pioneering When Light Pierced The Darkness: Christian Rescue of Jews in Nazi-Occupied Poland (Oxford UP, 1986) which still ranks as one of the major studies of Holocaust rescuer motivation. Four years later, she published In The Lion’s Den. The Life of Oswald Rufeisen (Oxford UP, 1990), a true yet totally improbable heroic account of a Jewish resister who passed as a Christian in Belorussian Poland, earned the trust of the Germans, managed to sabotage many Nazi plans, and saved the lives of hundreds of Christians and Jews. Tec’s powerful narrative entitled Defiance (Oxford UP, 1993) relates the phenomenal story of armed Jewish resistance in the forests of Belorussia, more precisely that of the Bielski otriad (detachment) which rescued 1,200 Jews from the clutches of the Nazis. Defiance became a New York Times bestseller and a major film (2008), directed by Edward Zwick and starring Daniel Craig and Liev Schreiber in which Tuvia Bielski, whose interest was in saving Jews, not killing Germans, appears as the Moses of the Forest, a Jewish Schindler, both armed resister and rescuer of Jews. Ten years later, in Resistance and Courage. Women, Men, and the Holocaust (Yale UP, 2003), basing her work on dozens of interviews and archival collections, diaries, memoirs, and secondary sources, Tec examines how Jewish women fared in various Holocaust settings (ghettos, camps, forests), how they responded to circumstances and each other, compared to Jewish men. She found that women in ghettos and camps were less prone to depression and inaction, more geared toward care-giving, cooperation, and mutual support and, generally, found more opportunities to fulfill pre-war roles than men did. Even in the forests where physical strength and military skills counted, women often stepped in to fulfill traditional male roles.

In the book under review, Tec immediately defines her terms. She regards individual responses to oppression as “resilience,” noting that “…resistance is more than not submitting—it is active and requires taking action, and that means cooperation with others…a sense of belonging to something greater than oneself “(4, 15). During the Holocaust, she explains, resistance normally required favorable typography (mountains and forests), “time to mature,” effective leadership and a supply of arms. Tec argues throughout that Jews did resist. So she reproaches Bruno Bettelheim, Hannah Arendt, and Raul Hilberg who, in one way or another, accused the diaspora Jews of complicity in their own destruction and thereby perpetrated the myth that the Jews went to their death “like sheep to the slaughter.” Furthermore, she does not limit the notion of resistance to armed resistance: “A more realistic and inclusive definition of resistances should include a range of prohibited armed and unarmed activities, such as: humane acts on behalf of others, the collection of prohibited historical evidence, and the rescuing of the persecuted” (13).

The rest of Tec’s study examines the ways Jews did resist in the ghettos, forests and camps. In the ghettos, where disease was rampant and roughly 20% of the population died of hunger, we find the same gender divisions noted earlier (men more despondent, helpless, and depressed; women more practical and able to fulfill their traditional roles as caregivers, housekeepers, cooks). In this regard, she depicts women in the ghettos organizing soup kitchens, orphanages, and helping the sick, but also signals out Vladka Meed in the Warsaw Ghetto and other women who gave lectures (which were forbidden), organized libraries and theatrical presentations, and generally promoted Jewish art and culture. Tec focuses on four men in the Warsaw Ghetto. Emmanuel Ringelblum, a man of selfless dedication, impeccable scholarship and exceptional organizing skills, who assembled a dedicated group of writers, teachers, scholars, and social activists who devoted themselves to documenting this contemporary history of Polish Jewry: “…unable to protect the Jewish people, they concentrated on saving Jewish history. This was their act of resistance”(70). They buried these writings in three milk cans, two of which were found in 1946 and 1950. The other men Tec signals out are Janusz Korczak who took his orphanage of 200 children into the Warsaw Ghetto, refused all attempts to be smuggled out, and went to the gas chambers of Treblinka with his orphans; and Mordechai Anielewicz and Yitzhak Zuckerman who led the Warsaw Ghetto Uprising in 1943.

In the forests, Tec relates tales of Jewish partisans in the Russian otriads where antisemitism was alive and well. She explains the double difficulty for Jewish “forest women,” most of whom were expected to satisfy the sexual demands of Soviet commanders. She highlights great Jewish forest figures such as Hersh Smolar, Mina Volkowisky, Dr. Julian Alexandrowicz, and Tuvia Bielski, who “embodied an ethos of resisting by saving” (121). In the concentration camps, Tec points out that, despite the fact that the Jewish inmates had the worst food, jobs, and living conditions which made them the least capable of resistance, not only did Jewish resistance groups exist and maintain contact with non-Jewish resistance movements, but organized armed Jewish resistance took place in “at least five major concentration camps and in eighteen work camps” (148). She then details the three great sonderkommando uprisings in Treblinka in August 1943, Sobibor in November 1943, and Auschwitz-Birkenau in October 1944. In the death camps of Triblinka and Sobibor, she uncovers deep male solidarity that was lacking in the work camps such as Auschwitz. In Auschwitz-Birkenau, she spotlights the heroic Roza Robota who smuggled the gunpowder to the sonderkommandos and was tortured beyond recognition but never revealed anything that could have endangered anyone.

Most of Tec’s study deals specifically with Jewish resistance against the Nazis but, as her title indicates, it also includes information about Christians who defied Nazi terror. The revolt in Auschwitz, for example, had non-Jewish components to it and, more generally, Jewish and non-Jewish undergrounds in Auschwitz-Birkenau engaged in similar resistance activities and often cooperated. In addition, as we have seen, Jews were involved with Russian partisans, male and female, in the forests of Belorussia. We also encountered Christian rescuers of Jews working with Zegota, an underground Polish organization designed precisely to help Jews. In all of these cases, this was resistance as defined by Tec.

Our book ends fittingly with two chapters on couriers, the first on Jewish couriers, the second on Jan Karski. Here gender plays a big role because women were mainly the Jewish couriers. They were less likely to be suspected of political transgressions and their ethnicity could not be ascertained by a genital check. Jewish female couriers, such as Leah Silverstein, Vladka Meed, Hela Schupper, Tosia Altman, Miriam Heinsolor, and Civia Lubetkim held the underground together. Ringelblum praised them for their bravery, and “selfless dedication to the Jewish people” (158). The average lifespan of underground couriers was only a few months. Most did not survive the war. Jan Karski was a Polish, Catholic courier who helped coordinate various underground movements. He was smuggled into the Warsaw ghetto and into a transit camp to gain first-hand knowledge of the Jewish plight. Then he went to England and the United States and met with Churchill, Roosevelt, and Anthony Eden; his pleas fell on deaf ears. Tec clearly demonstrates that Christians and Jews did resist violently and nonviolently just about everywhere during the Holocaust. Her latest study breaks new ground even as it reiterates the major themes of her illustrious life’s work.