Michael H. Ebner is professor of American history of emeritus at Lake Forest College. He can be reached at ebner@mx.lakeforest.edu 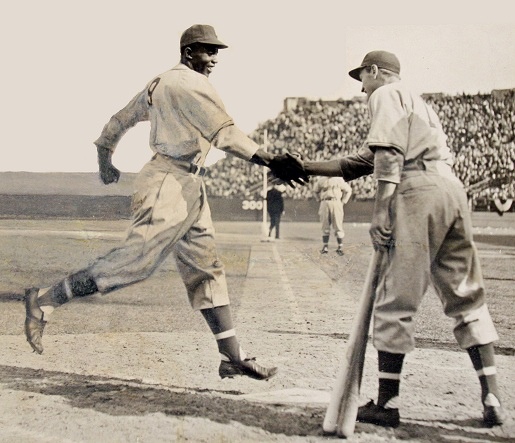 The obituary a few weeks ago of a former major league baseball player – George Shuba – has furnished a useful lesson about race.

Shuba, a journeyman outfielder, played for six years with the Brooklyn Dodgers (1948-1950 and 1951-1955). He never appeared in more than one-hundred games during his career, although he did have the distinction of playing in the World Series of 1952, 1953, and 1955. Brooklyn won its first world championship in the latter year. On the field Shuba is best remembered as a dependable pinch hitter – lifetime batting average of .259, with twenty-five home runs (one of them against the Yankees in the World Series of 1953) – for a team that was regularly in contention for the National League pennant.

Largely forgotten until the publication of his obituary last week, now Shuba is celebrated for breaking an inter-racial taboo. He did so by extending his hand by way of congratulating teammate Jackie Robinson, who had just hit a home run for the minor league team known as the Montreal Royals of the International League. The late Jules Tygiel, a peerless researcher, made no mention of it. Arnold Rampersad, in his biography of Robinson, mentions the handshake – and includes a photograph of it – but does not make much of the incident.

Next we turn to the obituary of Steve Gromek (1920-2002), a pitcher for the Cleveland Indians and later the Detroit Tigers. Over a seventeen-year career (1941-1957), he compiled a respectable win-loss record of 128-108. He won nineteen games during 1951 and eighteen in 1954. Gromek also won a World Series game in 1948, filling in for baseball legend Bob Feller who required an extra day of rest.

When Jackie Robinson arrived in the major leagues in 1947, he experienced the sting of racial hostility. A handful of his Brooklyn Dodger teammates unsuccessfully sought to prevail on the management of the Dodgers to drop Robinson from the roster. Pee Wee Reese – the team’s captain and shortstop, later elected to the Baseball Hall of Fame – rejected the opportunity to sign a petition circulated among teammates opposing Robinson’s presence on the roster. Well known is that the ringleader of the petition effort, Dixie Walker, ultimately found himself traded away by the Dodgers.

When the Dodgers played in Cincinnati a fan hurled vicious epithets at Robinson. Reese – a native Kentuckian – quietly walked across the infield to Robinson and gently placed his arm on his teammate’s shoulder. The hecklers ceased. While this moment remains much remembered, no known image exists.

This brings us to Larry Doby, the first African American to play in the American League. The rookie outfielder hit a key home run in the World Series of 1948, securing Gromek’s winning pitching effort. Afterwards Gromek enthusiastically hugged Doby in the clubhouse, an image that made its way into newspapers. Margaret Mackenzie wrote about the episode for the Pittsburgh Courier, a widely read African American newspaer: ''That picture of Gromek and Doby has unmistakable flesh and blood cheeks pressed close together, brawny arms tightly clasped, equally wide grins.'' The chief message of the Doby-Gromek picture is acceptance.''

Years later Gromek, a native of Hammtramck, Michigan – a largely white working-class suburb adjacent to Detroit – experienced ostracism but quickly shrugged it off. Today the Gromek-Doby embrace remains an iconic image in the history of American race relations.

These episodes – each of them situated in the immediate aftermath of World War II – reflect changing racial sensibilities. The Swedish social scientist Gunnar Myrdal, in his landmark book – An American Dilemma (1944) – anticipated the shifting tableaux of race relations in post-war American culture. What is remarkable is that major league baseball – its game played before crowds numbering in the tens of thousands – represented an agent of social change. The re-integration of professional baseball occurred seven years in advance of Brown v. Tulsa Board of Education.