When It Matters that Hollywood Get History Right

Robert Brent Toplin was a professor of history at Denison University and is professor emeritus at the University of North Carolina, Wilmington. Currently he lives in Charlottesville, where he teaches occasional courses at the University of Virginia. Toplin has published several books about film and history, including Reel History: In Defense of Hollywood. Contact: rt2b@virginia.edu

This year, as is often the case, history-oriented movies are among the top films competing for Best Picture, and all of these productions have come under some criticism for mixing fact with fiction. Debates about historical treatment are inevitable, since directors have to exercise artistic license when portraying real people and actual events. History from Hollywood almost always excites controversy, yet it frequently stimulates the public’s curiosity about the past in useful ways. 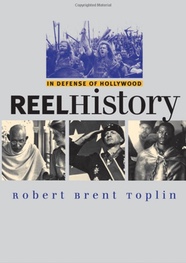 The professionals who cast ballots for the Oscars recognize that a movie’s presentation of a historical subject cannot be held to the same standards as a history book. A film is only about two hours long, and scripted dialogue amounts to just a few dozen pages. To make a story understandable, screenwriters and directors must simplify their presentations. They compress time, collapse several individuals into one, invent characters and situations, and imagine dialogue (because they do not know precisely what historical figures said to each other). Filmmakers often focus on just one key personality. In many respects they portray history in the manner of the nineteenth century Scottish essayist, Thomas Carlyle, who claimed, “History is nothing but the biography of the Great Man.” Of course, modern cinematic history also offers biographies of the Great Woman, as in Meryl Streep’s portrayals of Julia Child and Margaret Thatcher.

The Great Person approach is not alien to writers of history, for biographical treatments of famous leaders remain popular with readers. Of course, authors can analyze their subjects with greater sophistication than moviemakers. In hundreds of pages, historians have opportunities to acknowledge criticisms of the individuals they study. Impressive biographical treatments such as Doris Kearns Goodwin’s Team of Rivals (about Lincoln), John Milton Cooper, Jr.’s Woodrow Wilson, and David McCullough’s Truman deliver the nuance and complexity we expect from fine historians, yet these books provide enough positive interpretation to support a flattering biopic.

Writing, too, involves artistic license. Historians, in books and articles, privilege facts to bolster their thesis. They accentuate positive or negative information in ways that communicate judgments. Historical “truth” is not an absolute. It is contested – in writing as well as in film.

Cinematic history tends to foster a positive, even heroic portrayal of its subjects, and that narrative strategy often provokes objections. A brief look at one of the current contenders for Best Picture, The Imitation Game, illustrates both the appeal of cinematic history and the genre’s vulnerability to criticism.

The Imitation Game features Benedict Cumberbach in the role of Alan Turing, a mathematical genius that the British recruited to help crack the Nazis’ secret codes during World War II. Turing faces considerable resistance from the M16 intelligence agency when his team’s efforts fail to produce quick results. Eventually Turing succeeds in designing a computer-like mechanism that deciphers the Nazi’s Enigma device. The film reports that Turing’s invention helped to reduce the length of the war and save millions of lives. It also suggests that prejudice against Turing’s gay lifestyle led to his suicide.

Criticisms leveled against The Imitation Game relate primarily to the filmmakers’ efforts to depict Turing as a genuine hero. The movie identifies Alan Turing as a key contributor to the free world’s victory over Nazi tyranny. Yet Turing was one among several important analysts who worked in the code-breaking operations.

Specific details in the film have come under assault, as well. Critics note that the real Alan Turing was not as socially inept as the movie suggests. Furthermore, Turing did not work alongside the woman he admired, Joan Clarke (she conducted analysis in a different unit) and the real-life communist spy at M16 also worked in a different section of the intelligence operations. The filmmakers exercised dramatic license when they conveniently placed these individuals together in several scenes. Critics point out, too, that that the movie implicates the Red Scare in Turing’s post-war troubles when, in fact, it was the authorities intolerance toward his gay interests that primarily motivated their outrageous treatment of him.

These inventions and simplifications are not likely to weigh heavily in the voting of individuals in the motion picture industry who are casting ballots for the Academy Awards. Those professionals understand the challenges of fashioning a compelling history-oriented movie that attracts patrons. They recognize that The Imitation Game massages some factual details but contains enough uplifting messages to merit praise.

Like many acclaimed historical dramas, The Imitation Game relates the inspiring story of a committed individual who persists in his struggle despite many obstacles. The movie applies the old Frank Capra storytelling formula seen in Mr. Smith Goes to Washington (1939). And, like many other films of the genre, The Imitation Game contains a heartening message about human rights. It draws attention to the persecution of gays. To a lesser degree, the film reveals prejudice against women. It shows, too, that victory in war often comes from the labors of brilliant individuals in the laboratory, not just courageous men on the battlefield.

Filmmakers risk trouble with the fact-checkers when they distort the historical record in ways that provoke substantial protest in the national media. Hollywood professionals do not expect a movie to present history in precise detail, but they are uncomfortable with a public spat over the handling of evidence. Publicity about distortions can harm a picture’s chances for top awards. A few years ago Zero Dark Thirty, which depicted operations that led to the discovery of Osama Bin Laden, won acclaim. But the film lost ground in competition for Best Picture when it aroused controversy. Critics said the movie left a mistaken impression that torture produced key information about the terrorist’s hideout.

A recent example of unwelcomed controversy involves director Ava DeVernay’s Selma. The movie focuses on Martin Luther King, Jr.’s struggle for civil rights. At first the film received strong praise. Then criticisms about the movie’s depiction of history appeared in the national media. The most influential protest came from Joseph A Califano, who served as President Lyndon B. Johnson’s top aide for domestic affairs from 1965 to 1969. Califano claimed the movie falsely places LBJ at odds with Reverend King and shows Johnson using the FBI to discredit the civil rights leader. Selma shows Johnson reluctantly backing the Voting Rights Act of 1965, and it suggests the LBJ opposed the march for rights in Selma, Alabama. Califano emphasized that President Johnson was an important ally of King, not the troublesome figure seen in the movie.

DeVernay crafted an impressive and inspiring drama about the fight for racial justice. But her controversial depiction of Lyndon B. Johnson does not amount to small potatoes. DeVernay cannot demonstrate that her movie’s portrayal of the President contains some factual support. Her exercise in manipulation may sink the movie at awards time.

A comparison of debates about historical treatments in The Imitation Game and Selma yields some insights about the way history from the movies fares in the Academy’s judgments. A filmmaker is likely to face greater scrutiny about facts when portraying a famous leader -- especially a notable figure who served during the lifetime of moviegoers. Many of today’s patrons are aware that LBJ used his influence to pressure the Congress on civil rights. Some, like Califano, claim that they worked closely with Johnson and do not recognize the President in this Hollywood portrayal. Both enthusiasts of history and participants in history feel a sense of ownership in Johnson’s story. They will challenge a depiction that contradicts their impressions. Alan Turing, by contrast, is a rather obscure figure from the past. Very few moviegoers know much about him. They enter the theater with fewer expectations about seeing the “real” Alan Turing on the screen.

Cinematic history is almost always the subject of controversy in the weeks leading up to the Academy Awards, and in some respects these debates contribute to moviegoers’ thinking. Past winners of the award for Best Picture such as The Last Emperor, Driving Miss Daisy, Titanic, The King’s Speech, Argo, and 12 Years a Slave stirred viewers’ interest in reading and discussion. Those movies combined fact and fiction, representation and invention. They did not offer sterling examples of historical reporting or analysis, yet they succeeded in arousing the public’s curiosity about the past. That is a notable achievement.