Gillian O’Brien is a senior lecturer in History at Liverpool John Moores University and the author of "Blood Runs Green: The Murder that Transfixed Gilded Age Chicago" (Chicago, 2015). Follow her on Twitter @gillianmobrien or her personal blog: gillianmobrien@wordpress.com 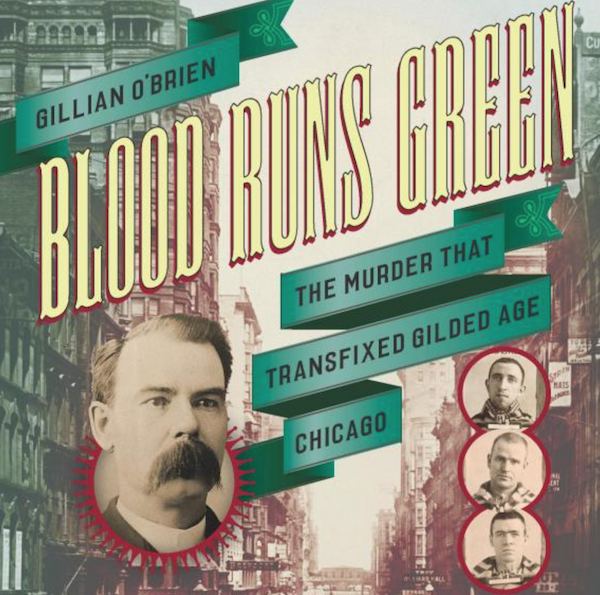 Today Saint Patrick’s Day is a broadly inclusive festival associated with fun, frivolity and, in Chicago, turning the river green.  Chicago’s first Saint Patrick’s Day parade took place in 1843 when the city was a mere six years old and the population about 8,000. By 1890, Chicago’s population had swollen to over one million and 17 percent of the city (or almost 180,000 people) were either Irish-born or had one parent born in Ireland.

In this period, Saint Patrick’s Day was an exclusively Irish (or Irish-American) affair, celebrated with a parade, dinners and balls, but for some there was a purpose to it that went beyond mere celebration. In the 1880s, radical Irish Americans flocked to join Clan na Gael —a secret revolutionary society devoted to using force to secure Ireland’s freedom from Britain. Winning Irish independence by force was a costly enterprise and so, while time was spent plotting and planning, writing manifestos, stockpiling dynamite, and penning newspaper columns, fundraising was also a key priority for the Clan. The chief fundraising activities were picnics, balls, and fairs, and Saint Patrick’s Day was just one of the several days promoted by the United Irish Societies of Chicago (UISC), an umbrella group representing many Irish and Irish American organizations, but run by the Clan. In addition to Saint Patrick’s Day, committed Irish republicans also celebrated Robert Emmet’s birthday (March 4); the Feast of the Assumption and the anniversary of Hugh O’Neill’s victory at the Battle of the Yellow Ford in 1598 (August 15); and the anniversary of the execution of the Manchester Martyrs in 1867 (November 23).

During the 1880s, Saint Patrick’s Day was marked with enthusiasm by the Irish and thousands attended functions in halls across the city. The halls were decked out with green ribbon and concerts of Irish traditional music and rebel songs took place. Republican songs such as “The wind that shakes the barley” and “The rising of the moon” were particular favorites. Most popular of all was T. D. Sullivan’s “God Save Ireland,” written in 1867 and inspired by the last words of the Manchester Martyrs as they were led from the dock after being sentenced to death.

It was set to the tune of the American Civil War song “Tramp, Tramp, Tramp!” and by the early 1870s it was regularly referred to as the Irish national anthem.  At the Saint Patrick’s Day celebration in 1888, Clan member and medical doctor Patrick Cronin led the crowd in a rendition of the song so loud “that the rafters shook and the [building] seemed in serious danger of collapsing . . . and the street-car horses on Madison Street shied as they passed a block away.”

For Irish nationalists in Chicago the warmer weather associated with the August 15 celebrations meant that an annual picnic was organized. From 1876 this picnic was held at Ogden’s Grove, near the junction of North and Halsted, far from the working-class centers of south Chicago but within walking distance for many living on the north side of the city. If eating, drinking, dancing, and speeches full of fire and brimstone could defeat Britain then Irish chances of success were high. As “Mr Dooley,” the comic, fictional creation of Finley Peter Dunne, wryly observed: “There’s wan thing about th’ Irish iv this town…they give picnics that does bate all. Be hivins if Ireland cud be freed be a picnic, it ‘d not on’y be free to-day, but an impre [empire].”  Thousands attended the picnics, designed in large part as a social gathering for families. Entertainment was laid on for adults and children. There was Irish dancing, alongside the “usual paraphernalia” of merry-go-rounds, fat men’s races, thin men’s races, three-legged races, girls’ sack races, long jumps and high jumps, the wheel of fortune, putting the shot and throwing the hammer, lung testers, and “try your weights.” Stalls sold food and drink and in the evening, following the inevitable political speechmaking, bands played a range of Irish and American dance tunes and the celebrations often culminated with a firework display.

The following decade, things were rather different. In Chicago, Saint Patrick’s Day 1890 came and went without any parade. No Patrick Cronin sang “God Save Ireland,” no rafters shook, no horses shied. Why were the Irish so silent that year? In a word: murder. In May 1889, Dr. Cronin had been summoned from his surgery on an emergency. A man had been injured at Patrick O’Sullivan’s icehouse in Lake View and Dr. Cronin was called to help. However, the call for aid turned out to be a ruse. Cronin was lured to an isolated cottage where he was brutally murdered and his naked and beaten body stuffed into a sewer where it was discovered several weeks later.

The police investigation, and subsequent murder trial, captivated the press and public both in Chicago and beyond. It soon became apparent that Cronin’s murder was the result of an internal dispute within Clan na Gael and fingers were quick to point at Alexander Sullivan, the leader of the Clan. Sullivan was never charged with Cronin’s murder but the press coverage surrounding the case forced Clan na Gael and its activities into the limelight. After such public exposure, the society’s ability to act as an effective fundraiser for Irish republicanism was greatly diminished. Many Irish in Chicago had joined Clan na Gael not because they had any overriding interest in Irish nationalism, but as a way of securing a good job; they were primarily interested in what the Clan could do for them, not for what they could do for Ireland. Cronin’s murder forced them to make a political decision and large numbers walked away from involvement in any form of Irish nationalism.

Chicago’s Irish and Irish American population was divided by the Cronin murder—a split that lasted into the early years of the twentieth century —and, despite the conclusion of the murder trial in December 1889 (several of Sullivan’s supporters were convicted), there was no appetite for any celebration of all things Irish on March 17, 1890. In 1891 the Saint Patrick’s Day parade was revived but it was a subdued affair, and it was many years before Saint Patrick’s Day was celebrated with the exuberance we see today.