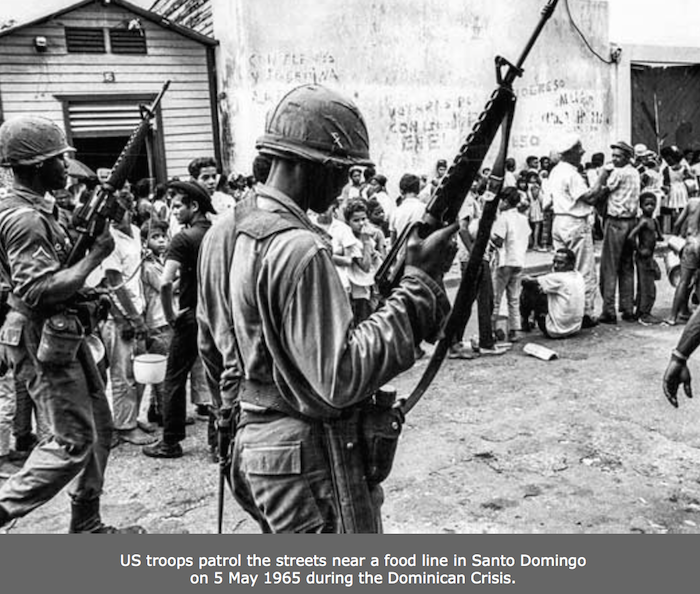 President Lyndon Johnson regretted sending U.S. troops into the Dominican Republic in 1965, telling aides less than a month later, "I don't want to be an intervenor," according to new transcripts of White House tapes published today (along with the tapes themselves) for the first time by the National Security Archive at George Washington University (www.nsarchive.org).

Johnson ordered U.S. Marines into Santo Domingo 50 years ago today. Three weeks later, he lamented both that the crisis had cost American lives and that it had turned out badly on the ground as well as for the United States' – and Johnson's own – political standing. Nevertheless, he insisted he would "do the same thing right this second."

In conversations with aides captured on the White House taping system, Johnson expressed sharp frustrations, including with the group surrounding exiled President Juan Bosch, whom the United States was supporting. Speaking in late May 1965, Johnson told an adviser, "they have to clean themselves up, as I see it, where we can live with them. Put enough perfume on to kill the odor of killing 20 Americans and wounding 100."

Johnson's public explanation for sending the Marines into Santo Domingo was to rescue Americans endangered by civil war conditions in the Dominican Republic. But his main motivation, the tapes and transcripts confirm, was to prevent a Communist takeover. Basing his decision largely on assertions by the CIA and others in the U.S. government that Cuba's Fidel Castro had been behind the recent uprising, Johnson confided to his national security advisor, "I sure don't want to wake up ... and find out Castro's in charge."

That intelligence, along with other information Johnson received during the crisis, turned out to be erroneous – a possibility LBJ himself worried about at the time.

The tapes, transcript and introductory material presented in this posting were provided by David Coleman, former chair of the Presidential Recordings Program at the Miller Center at the University of Virginia, and a Fellow at the National Security Archive. As Coleman notes, the materials are revelatory about Johnson's personal conduct of the crisis and his decision-making style as president. The transcripts, in several cases newly created by Coleman, are crucial to understanding the material on the tapes, which can be hard to decipher and are therefore often of limited usefulness on their own to researchers.

Lyndon Johnson and the Dominican Intervention of 1965

Fifty years ago today, some 400 U.S. Marines landed in the Dominican Republic. By the end of the following day, over 1,000 more had landed. In the coming weeks, they were joined by U.S. Army forces. Eventually, tens of thousands of U.S. troops would be engaged in what became known as the Dominican Intervention, first as part of a U.S. unilateral military action and then under the auspices of an international force compiled by the Organization of American States. Four days earlier, the Dominican Republic had begun a spiral into civil war when members of the Partido Revolucionario Dominicano (Dominican Revolutionary Party) and their allies stormed the National Palace and installed a provisional president. Resistance from Loyalist forces led to escalating levels of violence.

A series of increasingly dire reports from the U.S. Ambassador to the Dominican Republic, William Tapley "Tap" Bennett, Jr., warning that the situation was getting dangerous for American citizens in the country and that outside influences were likely playing an influential role in the revolution convinced Johnson that he had to act and that he did not have the luxury of time to assemble an international coalition through the Organization of American States.

Against the advice of many of his senior advisers, Johnson personally decided to send in the Marines. Their declared mission was to protect and evacuate U.S. citizens from the island. As he explained it to a national television audience on the evening of April 28, it was "in order to give protection to hundreds of Americans who are still in the Dominican Republic and to escort them safely back to this country."[1]

There was no mention of a communist threat in his public statement; nor had there been in his news conference comments the previous afternoon. Indeed, Johnson himself had specifically removed any such references from the drafts of his statement to encourage an emphasis on the peace-keeping and humanitarian aspects of the intervention. But there was a second important part of the military mission. As Chairman of the Joint Chiefs of Staff General Earle Wheeler put it in orders to General Bruce Palmer Jr., the commander of U.S. forces, the mission had two objectives, one announced and one unannounced.

Your announced mission is to save US lives. Your unannounced mission is to prevent the Dominican Republic from going Communist. The President has stated that he will not allow another Cuba—you are to take all necessary measures to accomplish this mission. You will be given sufficient forces to do the job.[2]

Johnson feared that Castro-ite and Communist forces were threatening to establish a Communist regime in the Dominican Republic. But there was little hard evidence of such influence—something Johnson suspected at the time and which prompted later private expressions of regret.

LBJ's secretly recorded White House tapes provide a deeply textured and intimate view of his decision making during the crisis.[3]

The telephone had long been one of Johnson's essential work tools, allowing him to neutralize geography and compress time in reaching out beyond the bubble of the Oval Office. During the Dominican crisis, he employed it extensively, connecting directly with Tap Bennet in Santo Domingo, and with Puerto Rico where Abe Fortas (the future Supreme Court justice) had volunteered his services as a line of communication with exiled president Juan Bosch. He was also able to get status reports at all hours directly from the duty officers in the White House Situation Room and the Pentagon Military Command Center. President Lyndon Johnson on the telephone in the Oval Office on July 17, 1965. Photo by Yoichi Okamoto / LBJ Library.

But it did not always go smoothly. The lack of secure communications equipment meant that the President and his representatives in the Caribbean typically had to speak over open lines that were prone to interception or just the more mundane problem of crossed lines. In some cases, that led to absurdly convoluted codes being improvised that often created more confusion than clarity. In one call presented below, Johnson tells Secretary of Defense Robert McNamara to call Bennett in Santo Domingo to ask his opinion on whether to send in an additional 500 Marines. "Listen for him to cough right loud, and if he doesn't, why, let's move," Johnson instructs.[4]

Reflecting Johnson's own heavy personal involvement in directing the intervention, the crisis is represented on hundreds of tapes in the Johnson collection of secretly recorded White House telephone conversations. Below is only a small sampling taken mainly from the first days when the important decisions were being made about sending U.S. Marines into harm's way and whether to escalate U.S. military involvement.

The transcripts presented here provide a cross-section illustrating Johnson's personal management of the crisis. Some of them are entirely new; others are improved versions of transcripts that have been published elsewhere previously. Together they reveal the kind of information that the President was hearing, including when, how, and from whom. They reveal, strikingly and often jarringly, the kind of incomplete and often flawed information that was being used to make important decisions. And they show the gap between what was being said in public and what was being said in private, a phenomenon that had troubled the administration less than a year earlier in the Tonkin Gulf episode and would become increasingly important as the Vietnam War raged on.

Links to Tapes and Transcripts

[Note: The following tapes are available at the Lyndon B. Johnson Presidential Library, White House (WH) and Situation Room (SR) Series, Recordings and Transcripts of Conversations and Meetings.]