75 Years Ago FDR Decided to Break the Two-Term Tradition

Richard Moe was chief of staff to Vice President Walter Mondale and a senior advisor to President Jimmy Carter from 1977 to 1981. The paperback edition of his book, Roosevelt’s Second Act – The Election of 1940 and the Politics of War, will be published in September by Oxford University Press. 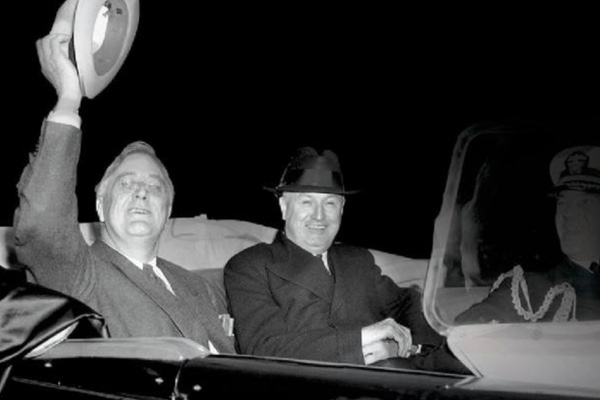 Seventy-five years ago this month Franklin D. Roosevelt decided to seek an unprecedented third term as president, an event which would profoundly change the presidency as well as America’s role in the world in ways that are still with us today. 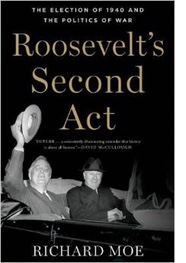 Roosevelt had long planned to retire to his beloved Hyde Park when his second term ended in January 1941. He had designed and begun to build a presidential library where he could play the role of elder statesman. Needing to replenish his finances, he had signed a lucrative contract with Colliers magazine to write regular articles, and two of his top aides – Harry Hopkins and Sam Rosenman – had agreed to come to Hyde Park to help him write his memoirs. He was tired, broke, and the New Deal had run its course. His place in history, he believed, was assured. As much as he loved being president, it was time to go home.

The war in Europe, however, changed all that. On May 10, 1940, two months before the Democrat convention was to convene in Chicago to nominate its candidate for president, Adolf Hitler unleashed the new military art of blitzkrieg and conquered virtually the entire continent. Only Great Britain remained in his path, but it was widely believed that its days too were numbered. FDR became convinced that if Britain fell, the war would inevitably come to America, which was totally unprepared for it. Months earlier, despite rampant isolationism in the country, he had persuaded Congress to amend the Neutrality Act and he made it his top priority to get that beleaguered island nation everything it needed “short of war” to stop Hitler.

At the same time Roosevelt tried but failed to find another prominent Democrat who would support his foreign and domestic policies and who could be elected in November. He relentlessly pursued Secretary of State Cordell Hull until the last minute, but Hull was adamant he wouldn’t run. On July 11, 1940, just four days before the Democratic convention opened in Chicago, FDR called his friend Felix Frankfurter down from the Supreme Court for advice. He wasn’t looking for personal advice or political advice, but rather he wanted the justice’s view on whether he, Roosevelt, was justified in challenging the tradition that limited presidents to two terms.

The two men huddled that evening in the Oval Study upstairs at the White House examining this huge question, which the Constitutional Convention had never resolved. Since no president in 150 years had ever broken the tradition established by Washington and Jefferson, it was considered by most people to be inviolable. No written account of the conversation exists, but after two hours the president asked the justice to give him a memo incorporating the advice he had just offered. Frankfurter asked if he could also request one from Archibald MacLeish, the librarian of Congress; FDR said yes but told him to make it fast and keep it quiet.

Frankfurter returned to the White House the next evening with the two memos, both of which stated unequivocally that Roosevelt was not only justified in running in the face of such national peril but he had a duty to run. Since there is no indication that Roosevelt ever shared his thinking on the decision with anyone else, not even Eleanor or Harry Hopkins, these memos, which have been almost totally ignored by historians, remain the best window into his mind on the question.

The president had clearly worried to Frankfurter that he would be called a “dictator” if he pursued another term, but the justice assured him that his exercise of executive powers in handling of the country’s economic crisis would insulate him against such a charge. Frankfurter added that the Constitution makes the president “the originating impulse and guardian of our national safety” and he told Roosevelt that he should “gladly submit your purpose . . . and your record to the judgment of your countrymen for a third term in the midst of unprecedented conditions that impose their own duties and obligations. A President must continue in office when the voice of the people calls him to the continuing task.”

MacLeish reinforced the theme but put it in language he thought Roosevelt could use: “In the face of the danger which confronts our time,” he summarized, “no individual retains or can hope to retain the rights of personal choice which free men can enjoy in times of peace. He has a first obligation to serve in defense of our institutions of freedom . . . which must override all personal preferences . . . .”

Immodest as it may have been, Roosevelt agreed with Frankfurter and MacLeish and concluded that he was indeed the most qualified person to steer the country through this moment of crisis. After nearly a year of total silence – the press came to call him a Sphinx on the question – he decided at that moment that he would seek a third term. But characteristically, FDR made his intentions known indirectly: he allowed himself to be “drafted” by his party, which fooled no one, and a few days later, on July 18, he became, for the third time, the Democratic Party’s nominee for president.

Although he was the consummate politician doing all he could to win a tight and hard fought race against Wendell Willkie, Roosevelt never forgot why he was running: he was preparing America for the war he knew was coming. In August 1940, less than three months before the election, he supported the very unpopular first peacetime draft in American history and, without seeking congressional approval, he sent fifty aging but desperately needed destroyers to Britain in exchange for naval bases in the Caribbean, an act which infuriated the isolationists and for which FDR thought he could be impeached. He used his election victory as a mandate to persuade Congress to enact Lend-Lease, which gave the president extraordinary powers to send military and other aid to America’s allies. His opponents said he was becoming a dictator, which he had predicted in his meeting with Frankfurter,

The combination of these actions and others that followed led directly to changes in the presidency itself, and especially to the tools available to the president; he significantly expanded the powers of the office in foreign policy as he had earlier in domestic and economic policy. Until FDR made Hopkins his de facto national security advisor in 1941, he had no White House staff to assist him, but eventually a formal National Security Council would be created. Roosevelt had no formal intelligence apparatus on which to rely; his information from abroad was almost entirely ad hoc, not infrequently provided by former classmates and social acquaintances returning from Europe. In 1941 he would create the OSS which would be followed over time by the CIA, the NSA and a complex of other intelligence organizations too numerous and intertwined for most people to understand. From these early steps we have today a national security apparatus more complex and more far-reaching than anything that could have been imagined in 1940.

The leadership Roosevelt exhibited in 1940 and early 1941, redefining and employing the full powers of his office, succeeded in piercing the veil of isolationism that had dominated the country’s foreign policy since the earliest days of the republic. Thereafter the United States would be seriously – and permanently -- engaged in the affairs of the world. The neo-isolationists in the Congress today are but a faint echo of those who sought to thwart Roosevelt’s efforts to aid Britain.

After the 1940 election the American electorate would view the presidency differently, using expanded criteria in selecting its chief executives. The chief question that year was which candidate was most qualified and competent to protect the American people from threats abroad, the most fundamental responsibility of the office; post-election polls showed that voters answered it decisively in FDR’s favor. The same question is already evident in the early stages of the 2016 presidential election.

The most immediate result of the 1940 election, of course, was the extraordinary skill that Franklin Roosevelt brought to aiding Britain and to leading the Allied effort during the Second World War. It made a monumental difference, arguably the critical difference. Elections matter and this one matters still, for its profound effect in shaping the nation we have become and its role in the world. It all began seventy-five years ago this month when Franklin Roosevelt made one of the most consequential presidential decisions of the twentieth century at a pivotal moment in American history.