R. Bruce Craig whose case, Craig v. USA, set the precedent for unsealing grand jury minutes for historic purposes over a decade ago, prepared the principal historical briefs in the successful efforts to release both the Rosenberg and Alger Hiss case grand jury transcripts. 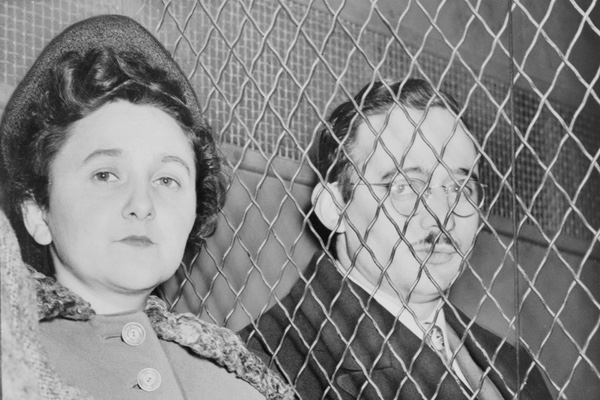 "Julius and Ethel Rosenberg NYWTS" by Roger Higgins, photographer from "New York World-Telegram and the Sun" - Library of Congress Prints and Photographs Division

Media reports dealing with the recent unsealing of the grand jury testimony of David Greenglass and Max Elitcher -- both key figures in the Ethel and Julius Rosenberg spy case -- by Federal District Judge Alvin K. Hellerstein have focused principally on evidence revealed in Greenglass’s 46-page grand jury statement regarding his relationship with his sister (and Julius’s wife), Ethel Rosenberg. That transcript reveals that Greenglass did not mention her name to the grand jury when testifying about Julius Rosenberg’s delivery of atomic secrets to the Soviets. This is an important omission as during the Rosenberg spy trials Greenglass testified that Ethel “typed” some of her husband’s hand-written notes for delivery to the Russians. (Ethel’s typing constituted the “overt act” that enabled her to be prosecuted.) Granted the absence of Greenglass’s statements to the grand jurors about his sister’s role in the espionage apparatus heightens suspicion that Ethel was wrongly prosecuted, convicted, and executed. But Greenglass’s omission comes as no surprise to those familiar with the intricacies of the case. Early on in the federal investigation into the Rosenberg spy ring, Greenglass was trying to protect members of his family, including his sister; his betrayal of her was to come only later when, according to his own admission, he was pressured into lying by federal prosecutors.

But more importantly -- and virtually ignored by all media accounts -- is that the Greenglass and Elitcher transcripts collectively reveal a great deal more about the Rosenberg spy ring than this one admission relating to Ethel. Of central importance in the Greenglass transcript is that it was David’s wife, Ruth – not Ethel -- who played the far more important role in assisting in Soviet espionage. (See Greenglass transcript, especially at _268-_278). This, in turn, had profound ramifications for David Greenglass when he opted to testify against his sister and brother-in-law in exchange for a reduced sentence and a promise by prosecutors that his wife would not be charged at all.

Because of her important role in the espionage cell, David had good reason to fear that his wife would be subject to an espionage charge unless he fully cooperated with prosecutors. In order to protect his wife and family, during the trial of the Rosenbergs Greenglass lied about Ethel’s role and only decades later did he admit to New York Times reporter Sam Roberts that indeed he had lied at the prosecutions’ prompting about Ethel’s role in her husband’s espionage activities. David Vladeck, the attorney who advanced the case to unseal the grand jury transcripts summed up this aspect of the case well when he stated, “It is deeply troubling to see these grand jury minutes that suggest that the government actually either deliberately put on testimony it knew to be false, or at least put on testimony it had reason to doubt its accuracy [about] a capital case like this.”

Though not mentioned in the media coverage it is evident that the Greenglass and Elitcher transcripts support a growing body of evidence that Ethel Rosenberg was certainly no innocent bystander. Adding to the already formidable body of evidence of her collusion in her husband’s espionage work is a statement in Greenglass’s testimony that “they” – that being Ethel along with Julius and others—were all present during meetings and discussions relating to espionage activities. And Max Elitcher’s testimony corroborates Greenglass’s hearsay statement that Ethel was present at various meetings of the principal co-conspirators. (Greenglass transcript at _173-176; see also Elitcher comment in his transcript of 14 August 1950 at _264, lines 8—10.) Based on these statements and that of additional suggestive evidence found in the previous grand jury release of Rosenberg grand jury testimony as well as other hard corroborating evidence from Soviet sources found in both the VENONA decrypts of KGB messages and in the notebooks of former KGB officer Alexander Vassiliev (in the 1990s, Vassiliev copied and compiled communications sent and received at the KGB headquarters in Moscow), there exists ample evidence pointing to her active involvement in Julius’s work.

Ethel Rosenberg’s most notable role in the atomic bomb conspiracy was her effort to recruit Ruth into espionage. The evidence is incontrovertible. First, in a VENONA decrypt dated November 27,1944, Julius told his KGB handlers that both he and his wife recommend that David’s wife, Ruth Greenglass, be recruited into the espionage apparatus. Ethel’s opinion carried weight as less than a week later the KGB cabled that they felt that Ethel was “sufficiently well developed politically,” that she “knows about her husband’s work” and is considered “positively” by the KGB Moscow Centre as “a devoted person.” (VENONA, 1657, KGB New York to Moscow, November 27, 1944.)

Second, the Vassiliev notebooks record an entry stating that while Ethel could be used independently from Julius, because of her poor health she should not be overworked. And in another entry of May 12, 1944, Julius reported that in a meeting with Ruth and Ethel, it was Ethel who “interposed to stress the need for utmost care and caution in informing David of the work in which Julius was engaged” and that “for his own safety all other political discussion and activity on his part should be subdued.” All this strongly points to Ethel’s active involvement in an espionage conspiracy. (See John Haynes & Harvey Klehr, VENONA: Decoding Soviet Espionage in America, especially pages 308-311, and Haynes, Klehr and Alexander Vassiliev, Spies: The Rise and Fall of the KGB in America, pages 33-143.)

Consequently, when examining the collective evidence there is little doubt that the government appears to have been justified in prosecuting Ethel as a co-conspirator under the conspiracy statute in place at the time. As John Haynes aptly put it: “If Ethel had not assisted in recruiting Ruth, David might never have been recruited and there would have been no Rosenberg atomic spy case.” (J. Haynes to Bruce Craig, email communication 7/17/2015, in author’s possession.) Whether Ethel was deserving of execution for her role in her husband’s espionage apparatus is certainly another matter.

The transcripts reveal even more of interest. Julius appears to have been very well informed about a great many details about the technical development of the atomic bomb long before he came to possess the secrets given to him by Greenglass. This lends additional credence to the now well-known fact that others were passing information to Julius, including details about the atomic bomb that were probably of far greater importance than were Greenglass’s contributions. Interestingly, in a move almost unique in the history of Soviet spy craft, the Vassiliev notebooks provide evidence that Rosenberg’s Soviet handlers actually briefed him on aspects of the atomic bomb development. The communication reads: “in the interest of using LIBERAL [Julius Rosenberg’s code name] as effectively as possible on “E,” familiarize him with the main points of this problem.” (Vassiliev, Black Notebook at 113, message date of May 28.07.44.) Exactly what level of detail his handlers shared with Julius about the bomb is not clearly stated, but it remains highly doubtful that the amount of technical information that Julius came to possess was merely the result of the briefing that the KGB gave him.

Turning now to the testimony of Max Elitcher, whose statement was also virtually ignored by the media. It contains some of the most interesting material found in the recent release of documents. Elitcher’s grand jury testimony is consistent with his court testimony in which he stated that Julius Rosenberg and Morton Sobell tried to recruit him into espionage. A close reading of the Elitcher transcript suggests a far greater involvement in Rosenberg’s espionage ring by Joel Barr and especially Morton Sobell. (Elitcher transcript at _265-_299.) More than any of the other grand jury witness statements that have been previously unsealed, it is Elitcher’s testimony that perhaps best sheds light on Sobell’s important role in Julius’s espionage ring . Elitcher’s detailed and lengthy statements provide yet more corroboration that Sobell, in denying his role in espionage, boldly lied for years in his spirited public defense.

Finally, the transcripts suggest that the principal characters involved in Rosenberg’s apparatus were well aware that their participation was “illegal” and that their activities constituted “espionage.” (Elitcher transcript of January 31, at 10449 and 10451.) Given the level of social interaction between the principals in the conspiracy, I doubt that any of them could claim they were ignorant of Julius’s activities. Today, there remains little question that the principal participants were well aware of what they were doing and knew where the information they turned over to Julius was ultimately destined to go: the Soviet underground.

With the release of the Rosenberg grand jury record there remains but one additional participant whose testimony has not been unsealed: William Danziger. The FBI considered Danziger a possible accomplice to Sobell’s flight to Mexico to avoid prosecution and his grand jury testimony may shed additional light on Sobell’s role in the Rosenberg conspiracy. Noting that Danziger had died in December 2012 was a regrettable oversight by those of us involved in the most recent effort to see all the Rosenberg grand jury minutes released. After appropriate court filings have been made, we well expect that his testimony will be released in the near future. After that, the grand jury case against Julius and his co-conspirators will be finally closed though the dueling narrative regarding the Rosenberg spy case will undoubtedly continue long into the future.