by David A. Mindell

David A. Mindell is Professor of Aeronautics and Astronautics and Dibner Professor of the History of Engineering and Manufacturing at MIT. This article is excerpted from Our Robots, Ourselves, published on October 13, 2015 by Viking, an imprint of Penguin Publishing Group, a division of Penguin Random House LLC. Copyright by David A. Mindell, 2015. 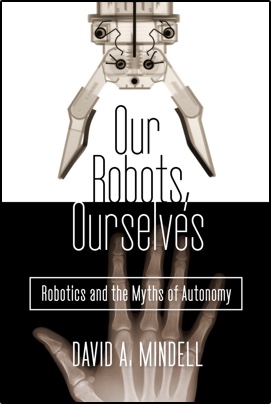 In 1862, a crew member of the new ironclad warship USS Monitor, staring at his new, ominous iron home, wondered “whether there isn’t danger enough to give us glory.” The new technology, with its apparent ability to protect him from the risks of enemy shellfire, changed his definitions of heroism. Herman Melville, upon visiting the Monitor, wondered whether “warriors are now but operatives,” or factory workers. Predator pilots inherit these anxieties, updated in a world of global networks, cognitive systems, and knowledge work.

The Predator cockpit is more than a place where pilots fly airplanes. It is a node that brings together the people and information required to fight a modern war, from aircraft designers, programmers, pilots, sensor operators, troops on the ground, and analysts who consume the data. It does so within a context of distant wars with shifting goals operating under fragile political consensus. Presidential power, congressional oversight, intelligence agencies and the public are all part of Predator’s network. Warfare is always a social experience, and even the enemy and the civilians with whom they mingle have a presence here. The job of the Predator crew is to sort through these conflicting representations, conflicting social agendas, and conflicting professional identities to achieve their goals, which are often unclear. Through the flashing screens they enter into a different world.

Yet, in the words of a Predator pilot at a recent air force symposium on the “future operator,” “UAS pilots/operators have an identity crisis.” On the one hand, they are mocked and reviled as armchair warriors, unable to risk their bodies in heroic conflict. On the other hand, they are stressed because their work is in such high demand, work that gives them a novel, telescopic view into the horrors of a new and unfamiliar kind of war. Like the crew of the Monitor, they wonder whether there isn’t danger enough to give them glory.

In the civilian world, danger and glory do not press with the same acuity as in warfare. But professional dignity, social status, and changing tasks are similarly at stake in modern workplaces. When confronting new machinery, we are all Predator operators.