Steven C. Beda, an instructor at the University of Oregon's history department, researches the environmental history of timber workers and timber workers' unions in the twentieth century Pacific Northwest. 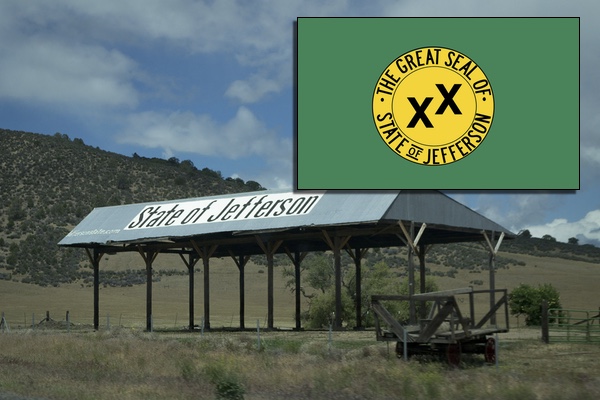 "State of Jefferson Barn" by Visitor7 - Own work. Licensed under CC BY-SA 3.0 via Commons.

In a rural corner of the Northwest, a lonesome place where livestock outnumber people and the vastness of the landscape makes a person feel insignificant, Stetson-clad men brandishing hunting rifles seize state property in an act of anti-government protest. For far too long, they say, politicians and do-nothing bureaucrats have managed lands in the interests of urban elites, ignoring problems in rural communities.

This is not a description of the on-going occupation of the Malheur National Wildlife Refuge, in Harney County, Oregon near the small town of Burns, where right-wing militia members are holed-up, demanding, among other things, that the federal government turn control of grazing lands over to local communities. Rather, this scene comes from 1941, when farmers, ranchers, miners, and loggers from several counties in southern Oregon and northern California barricaded a section of Highway 99 near Yreka and announced their intention to secede from their respective states and create a new 49th state, the state of Jefferson.

The media was quick to criticize the State of Jefferson movement, just as the media has been quick to criticize the Malheur occupation. Today, liberal commentators point out that the ranchers-turned-anti-government activists in Burns are, in fact, among the biggest beneficiaries of state spending. There’s also something deeply ironic about protesting state power in Harney County, a place named for a Civil War general who, among other things, led the Indian removal campaigns that facilitated white settlement in southern Oregon.

Then there’s the problem of the militia members claiming to speak for the rural people of Oregon, when few, if any of them, are from Oregon.

Simply dismissing the Burns protestors and their supporters as right-wing cranks or hypocrites or referring to them as “Y’all Qaeda” or “Vanilla Isis,” as many on social media have, belies the more complex realities of rural politics in the Northwest. To understand those politics it’s useful to look at the longer history of rural conflict in the region, at things like the State of Jefferson movement. Doing so shows that rural disquiet is nothing new in these parts and that trivializing both past and present rural frustrations only marginalizes people whose anger stems from a long history of marginalization.

Though a dearth of records makes it difficult to establish a definitive chronology, the State of Jefferson movement started sometime in late-1941, when ranchers, farmers, miners, and loggers living in the Oregon’s Curry, Josephine, Jackson, and Klamath counties joined with rural people in California’s Del Norte, Siskiyou, and Modoc counties and demanded that the federal government recognize them as a new and independent state.

At its core, this movement was about the New Deal’s failure to reach into southern Oregon and northern California. The Depression hit this part of the Northwest particularly hard. The economies of these counties rested entirely on lumber, mining, and ranching and when commodity prices fell in the early-1930s, ranchers started losing their land to banks and loggers and miners found themselves in breadlines. In some southern Oregon lumber towns, the unemployment rate reached as high as 35%.

The New Deal promised to fix rural America’s problems by giving farmers and ranchers and rural producers more control over natural resources. Whatever else they may have believed, New Dealers felt that rural people knew best how to use and manage their lands. Problems started when the vagaries of commodity markets and financial systems forced rural people to harvest, mine, or log more than the land could bear. New Dealers argued that improving the rural infrastructure and building roads and irrigating fields and bringing electricity to farmhouses would make rural production more efficient, make rural producers more independent, and allow rural people to prosper without denuding the earth.

But in southern Oregon and northern California: nothing. The timber in Oregon’s Siskiyou Mountains was valued at hundreds-of-thousands of dollars an acre and the Gray Eagle Mine near Happy Camp, California contained one of the richest seams of copper in the country. But impassible and tire-shredding roads made it impossible to access these resources and the unemployment rate remained higher than the regional average. Nor had electricity reached rural communities in southern Oregon and northern California. When farmers on the Columbia Plateau were, for the first time in their lives, ending their days in the soft glow of electric lights, ranchers in northern California were still completing their evening chores in the dim glow of gaslight lamps.

The activists who organized the State of Jefferson movement believed that politicians in their respective state capitols had encouraged development only in rural areas that would benefit cities. They had a point. Although Oregon and California’s farmers benefited from New Deal projects, the Columbia River dams and Central Valley project did much more for the economies of Portland and San Francisco. As the State of Jefferson’s ranchers and loggers saw it, the promise made to them by the New Deal had been traded away to benefit urban elites. Hence what became the movement’s official symbol: two Xs, signifying that the rural people of southern Oregon and northern California had been double-crossed by Salem and Sacramento.

The movement’s defining moment came when they took control of Highway 99 in Yreka. Motorists were allowed to pass, but only after they’d taken a copy of the group’s Proclamation of Independence, which said, among other things, the armed loggers and miners were in “patriotic rebellion against the States of California and Oregon” and they would “continue to secede every Thursday until further notice.” The date was November 27, 1941.

Clearly, they were unluckily in their timing. The bombing of Pearl Harbor two weeks later quickly overshadowed the movement. And the wartime economy did quell some of the unrest by stimulating the lumber, mining, and ranching industries.

But if the State of Jefferson was an ad-hoc and short-lived social movement, you’d never know it travelling through these parts today. The double-X seal is still visible on bumper stickers pasted to battered F-150s. Roadside signs welcome you to the State of Jefferson. Turn your radio to KSOR (90.1 FM), broadcast out of Southern Oregon University, and you’re listing to Sate of Jefferson Public Radio.

In many ways, the State of Jefferson movement has done more in death than it did in life. It’s no longer a movement, really, but an identity, part of southern Oregon and northern California’s collective memory, a reminder that urban centers of power still control rural resources, and more than anything else, a way for people here to say that while they live in Oregon and California, they’re not of Oregon and California.

This State of Jefferson state of mind largely emerged in the 1970s, after Oregon governor Tom McCall pushed his infamous land-use planning bill through the state legislature. The bill aimed to protect Oregon’s forests and farmland by severely limiting rural economic development. For loggers and ranchers struggling through stagflation, it once again looked like their economic futures were being dictated by affluent urbanites, this time for outdoor recreationists who wanted pristine landscapes to play in. Much the same was true a decade later, when the conflict between loggers and environmentalists over spotted owl habitat heated up and it looked like politicians cared more about birds than the unemployed loggers struggling to make it through the timber recession. The Endangered Species Act (ESA), passed in 1973, has been a constant source of frustration. When the spotted owl was ESA-listed in 1994, loggers found themselves at the whims of scientists who, just about everyday, declared new forest tracts off limits. Since wolves have been reintroduced under the ESA, ranchers have been in near-constant uproar, claiming they can’t protect their herds.

Describing rural opposition to land-use planning or ESA protections as right-wing reactionary politics ignores the State of Jefferson’s complex political landscape. While it’s true that Democrats are a rarity in these parts, save for the small city of Ashland, home to ex-hippies and millionaire techies fleeing the Bay Area, which people here only grudgingly accept as part of the State of Jefferson, southern Oregonians and northern Californians don’t always toe the right-wing party line. There’s a distrust of large corporations and absentee landholders and people hold to something resembling the producerist ideology of Progressive Era reformers, who believed that land should be put to use for the benefit of all. And in 1984, when the entire country went for Reagan, several precincts in the State of Jefferson went for Mondale, who promised to reform Forest Service regulations and streamline the timber sale process.

Nor should we read rural protest as anti-environmentalism. Quite to the contrary, the State of Jefferson has a long history of environmentalist politics. In the 1950s and 1960s, the major timber workers’ union here, the International Woodworkers of America, called for stricter harvesting regulations on public forestland. Ranchers and loggers from Grants Pass and Medford were among those who wrote letters to Congress, urging the passage of the 1964 Wilderness Act. Most recently, ranchers in the Klamath Basin negotiated an agreement with the Klamath Tribes to remove dams and restore salmon runs on the Klamath River.

What rural protest in the State of Jefferson has been about, whether in the 1940s, the 1970s, or today, is fulfilling the promise of the New Deal, to let rural people manage resources in the ways that are best for their communities. It’s of course unlikely that any of the militia members in Burns see themselves as neo-New Dealers. Still, the militia’s message that local communities need more control of grazing land likely resonates with southern Oregonians because they feel that for the last seventy-five years they’ve been economically marginalized by outsiders telling them how to manage their lands.

The thing that’s troubling about events like the seizure of Highway 99 in 1941, or the occupation of Malheur today, is that rural people don’t get heard until there’s a spectacle. And then the story becomes the spectacle, and spectacle is easily dismissed. But beneath these past and present spectacles are some real issues that require attention: the state of the rural economy, the power urban centers wield over rural areas, land-use policies that disrupt rural production. Had the story back in 1941 been more about the issues and less about the spectacle perhaps militia members wouldn’t be in Burns today.