Jim Downs is the author of Stand By Me: The Forgotten History of Gay Liberation (Basic, 2016). He is currently an Andrew W. Mellon New Directions Fellow at Harvard University and an Associate Professor of History at Connecticut College.

Courtesy of SlideShare from LinkedIn

Hillary Clinton reminds us that LGBT history continues to be distorted.

In an interview the other day, Hillary Clinton stated, “Because of both President and Mrs. Reagan, in particular Mrs. Reagan, we started a national conversation when before nobody would talk about it, nobody wanted to do anything about it, and that, too, is something that I really appreciate. With her very effective, low-key advocacy … it penetrated the public conscience and people began to say: ‘Hey, we have to do something about this too.’” 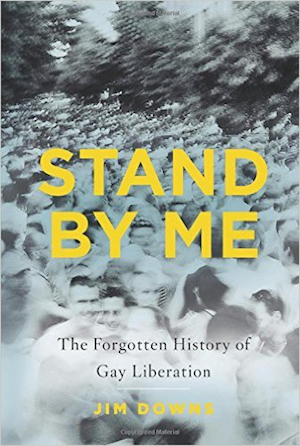 President Reagan and his wife did no such thing; in fact, their failure to declare an epidemic led to thousands of people dying and countless more becoming infected with HIV.

The fact that Hillary Clinton made this error, which she quickly rescinded, is actually less about her and more about the unspoken crisis plaguing the gay community:  people outside of the LGBT community don’t know anything about gay history and never have. The majority of college, high school, and grade school curricula do not mention the word gay let alone include units that chart the rise of gay liberation, the meaning of sexuality, and the long history of queer people throughout the world.

The point of knowing LGBT history is not only to learn about a major segment of the population, but it is also, as many LGBT historians will emphatically assert, to learn about heterosexuality as well.  Jonathan Ned Katz, one of the pioneering historians of LGBT history, wrote a stirring analysis of sexuality, titled the Invention of Heterosexuality.  By reading about same-sex desire in the past, he identified the moment when the notion of homosexuality began. Although men and women had been engaging in same-sex relations since the ancient period, there was no classification of that physical relation until the late nineteenth century, and when it developed, so did the notion of heterosexuality. For Katz, and many others, learning about LGBT history is also about developing a richer historical context to understand heterosexuality.

Katz became a historian because he feared that despite the triumph of gay liberation, the history of the 1970s would be erased similar to the way it is being forgotten today. Katz came of age after the Stonewall uprising in 1969, which signaled the start of gay liberation, but unlike some of his contemporaries who put their energy into direct political reform, Katz decided to write about the past.  With no more than a high school diploma, Katz began to participate in a weekly reading group on the Upper West Side of Manhattan near Columbia University, where he met with other like-minded individuals who read social theory, debated the tenants of Marxism, and learned about feminism. In that group, he began to hear of a rumor about a thriving gay community that existed in Germany before the rise of Nazism.  James Steakley, a member of the cohort, traveled to Germany and did historical research about this unknown world. He came back to the United States with stacks of mimeographed pages about Berlin, ranging from notes about a late-nineteenth century doctor, Magnus Hirschfeld, who sympathized with homosexuality, to details of the community of gay people who thrived before the arrival of Hitler.

Learning about how Nazism erased the history of a gay community in Berlin, Steakley, Katz, and others worried that those in power would denounce the history of gay liberation in the United States in the 1970s and not include it in history books.  Consequently, Katz and others took time away from the daily jobs and careers to collect artifacts and documents about the past. Not having the support of mainstream publishers, they then turned to the sprawling, subterranean newspaper culture that had begun to expand in the 1970s. These papers began to include exposes on queer writers from the past, stories about gay men killed at the Salem Witch Trials, and histories of gay communities in Asia and the Middle East.

Despite their brilliance and fierce intellectual commitments, much of their work never made it beyond newspaper publications.

Hillary Clinton’s mistake about the Reagans’ handling of the HIV epidemic, one of the most well-documented facts in LGBT history, signals the crisis that the gay community is currently facing. While the Supreme Court might acknowledge our marriages, LGBT history still remains in the closet.