The Rosenbergs Were Blamed for Starting a War. It Wasn’t True.

Lori Clune is Associate Professor of History at California State University, Fresno and author of Executing the Rosenbergs: Death and Diplomacy in a Cold War World, which analyzes the widespread global protest movement the Rosenberg case provoked, just released from Oxford University Press. 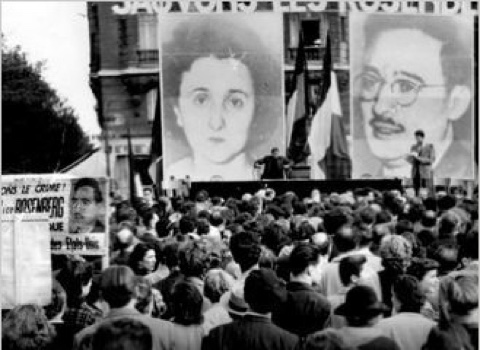 Sixty-five years ago this week – on April 4, 1951 – Judge Kaufman settled into his courtroom chair, turned to Julius and Ethel Rosenberg and sentenced them to death. They were traitors, he explained, guilty of “putting into the hands of the Russians the A-bomb years before our best scientists predicted Russia would perfect the bomb.” And by empowering the Soviets they had caused Communist aggression in Korea – where American casualties topped 50,000 and increased daily. A jury – hardly of their peers since there were no Jews on it – had convicted the NYC couple of conspiracy to commit espionage. In June 1953 – after nearly two years of appeals – prison officials executed the Rosenbergs in the Sing Sing Prison electric chair, making orphans of their two young sons, Michael and Robert. 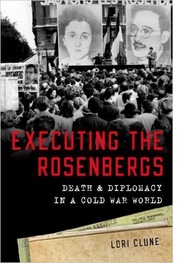 Truman administration officials were convinced that the couple needed to die because they handed “the secret” of the atomic bomb to the Soviet Union and, empowered with the bomb, the Communists had encouraged North Korea to invade South Korea in 1950. U.S. and UN troops countered this aggression in a bloody police action. Most Americans believed their government officials. So did Judge Kaufman, who used the charges to justify the death sentences. The only problem was, the accusations were false.

Irving Kaufman – a prickly, demanding adjudicator – took the packed courtroom on a lengthy trek to rationalize the death sentence. He argued that espionage – “sordid, dirty work” which included “the betrayal of one’s country” – deserved the maximum sentence. He explained the penalty for espionage was up to thirty years in prison – or death if committed during wartime – and since the prosecution proved the conspiracy began during World War II, the judge argued, the executions were justified. Kaufman focused, however, on a different war – the “life and death struggle” of the Cold War – to defend the harsh treatment of the “traitors in our midst.” Soviet Communism threatened “our very existence,” Kaufman argued, and he chose a severe sentence as a warning to others engaged in espionage. Leniency towards the Rosenbergs, he explained, “would violate the solemn and sacred trust that the people of this land have placed in my hands” and be interpreted as a sign of weakness overseas.

The judge admitted that sentencing a young mother to death required further explanation. While Julius “was the prime mover in this conspiracy,” Kaufman explained, “let no mistake be made about the role which his wife, Ethel Rosenberg. Instead of deterring him from pursuing his ignoble cause, she encouraged and assisted the cause. She was a mature woman, -- almost three years older than her husband and” – despite much evidence to the contrary – “she was a full fledged partner in this crime.”

But Kaufman saved his strongest argument, the final nail in the Rosenbergs’ coffin, for the end – Korea. In justifying his decision, he blamed the “arch criminals in this nefarious scheme” for instigating North Korea’s invasion of South Korea. He considered their crime “worse than murder” and predicted “ millions more of innocent people may pay the price of your treason.” The jury had declared the couple guilty of conspiracy to commit espionage, but the judge appeared to be sentencing them to death for treason.

The Rosenbergs did not hand an atomic bomb to the Soviets. The information Julius provided came from his brother-in-law, David Greenglass. An army mechanic, Greenglass did not have an advanced understanding of nuclear physics and could only supply rudimentary material. While scholars continue to debate the importance of the atomic information Julius Rosenberg forwarded to the Soviets, they probably got little to nothing that was new.

Historians continue to debate what likely prompted North Korea to launch a sizeable offensive into South Korea in June 1950, but evidence indicates that the invasion was not the result of the Soviet Union’s plan to expand Communism. Stalin had repeatedly rejected North Korea’s plan for invasion, even just after the Soviet’s first successful atomic bomb test in August 1949, presumably when Stalin was feeling strong and confident. The Soviet leader finally relented in January 1950, crediting the importance of the Communist victory in China the previous year. Mao and his troops were now ready, willing, and able to provide support in Korea if necessary. Stalin also doubted any U.S. intervention, agreeing with North Korea that they would enjoy a quick victory before the Americans had time to get involved. After Secretary of State Dean Acheson gave a speech in early 1950 that appeared to exclude Korea from the U.S. “defense perimeter,” American involvement seemed even less likely. The evidence does not indicate that Stalin ordered the invasion because he was emboldened by possession of atomic weaponry. Yet that is the narrative that U.S. government officials believed.

The 1951 trial was a mess, plagued with irregularities and illegalities. Truman’s Justice Department prosecution team committed acts of misconduct, the judge violated the judicial code of ethics, the defense performed with minimal competence, and the Supreme Court’s subsequent review of the case proved inadequate. After President Eisenhower twice denied clemency, prison officials electrocuted the couple on June 19, 1953.

Julius Rosenberg did not hand atomic bomb blueprints to the Communists or cause the Korean War, as Judge Kaufman had asserted. He did, however, run a sizable spy ring that funneled military secrets to the Soviet Union from 1944 to 1950. We know now that Kaufman, in consultation with the Justice Department, handed down the death sentence to pressure Julius into confessing – he would name his fellow spies and spare the life of his wife and the mother of his children. This effort failed. Up until Julius and Ethel’s final moments the FBI was prepared to listen. The couple called their bluff and went to their deaths instead – and dead spies don’t talk.

The executions also tarnished America’s image abroad. While the majority of Americans believed the Truman administration’s assertions, recently discovered State Department documents expose a widespread protest movement that erupted in eighty-four cities in forty-eight countries around the world.  Allies across the globe – even those who accepted the couple’s guilt – saw the executions as senseless violence motivated by paranoid anti-Communism. During the Cold War, American administrations worried about the spread of Communism at home and overseas, and were horrified at the prospect of leaving the homeland vulnerable to a devastating nuclear attack.  Protesters accused U.S. government officials of allowing those real fears to cloud their judgment regarding the Rosenbergs.

Cold War terror and paranoia drove federal officials to prosecute the only spies they could get their hands on. Federal officials, most Americans, and Judge Irving Kaufman, all subscribed to the false narrative that Julius and Ethel Rosenberg handed the secret of the atomic bomb to the Soviets and thus emboldened Stalin ordered North Korea to invade its neighbor to the south. But they were wrong.