Walter G. Moss is a professor emeritus of history at Eastern Michigan University and Contributing Editor of HNN. For a list of his recent books and online publications, click here. Much of the Sandburg information which follows is adapted from my earlier amply footnoted 45-page work “The Wisdom of Carl and Paula Sandburg.” 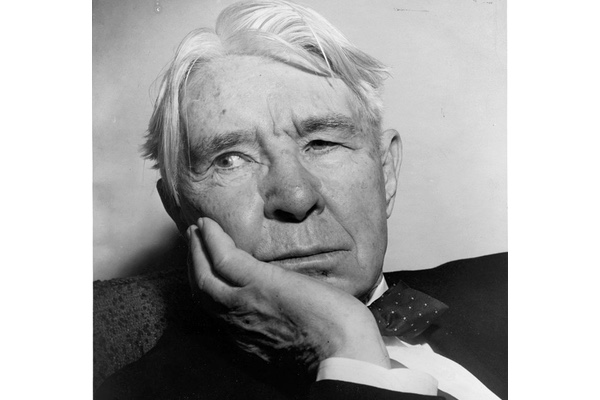 Until Bernie Sanders listed the Democratic Party as his party affiliation in his statement of presidential candidacy, he was an Independent in Congress and elsewhere. He also admitted to being a democratic socialist and admiring certain aspects of European socialist programs. Many pundits predict that if he should somehow become the Democratic presidential nominee, Republicans would have powerful ammunition to launch at him by raking up his past sympathy with socialism and suggesting that his views were “un-American.”

Sanders, however, is not the first American of note to make the transition from democratic socialism to identifying with the Democratic Party. A century ago, poet and future Lincoln biographer Carl Sandburg did something similar. For at least a decade, from 1907 to 1917, Sandburg considered himself a socialist, and strongly defended Socialist Party positions until he split with most socialists in 1917 by supporting President Wilson’s decision to go to war with Germany. Yet in the 1920 presidential election he still voted for his friend, the Socialist candidate Eugene Debs, whom Bernie Sanders regards as one of his political heroes.

Only later, though Sandburg never joined another political party, did he become a strong champion of various Democratic presidential candidates. Yet, despite his earlier decade-long affiliation with the Socialist Party, Sandburg came to be recognized as one of our greatest Americans. Consider all of the accolades showered upon him.

In 1940, after President Roosevelt (FDR) heard a rumor that Sandburg might run for a Congressional seat, he encouraged Sandburg, stating “it would be grand to have your kind of Lincoln liberal in the Congress.” That same year Sandburg’s six-volume biography of Abraham Lincoln won him the Pulitzer Prize for history—in 1951 he was awarded the Pulitzer for poetry.

In 1949 Illinois Governor Adlai Stevenson invited Sandburg to speak at his inauguration and then be his guest at the governor’s mansion in Springfield—they had been friends since the 1920s and 1930s in Chicago, when Sandburg often entertained his friends with folk songs. In 1953, at a seventy-fifth birthday celebration for Sandburg, Stevenson (the Democratic presidential nominee in 1952 and 1956) said that he “is the one living man whose work and whose life epitomize the American dream.”

In 1959, the 150th anniversary of Lincoln's birth, Sandburg spoke of Lincoln to a Joint Session of the U. S. Congress. He was the first private citizen to address such a session in the twentieth century. For JFK’s 1962 book To Turn the Tide, the president invited Sandburg to write the Forward, which the poet did. In 1964, President Johnson (LBJ) awarded him the Presidential Medal of Freedom.

Not long before Sandburg’s death in 1967, the head of the National Association for the Advancement of Colored People (NAACP), Roy Wilkens, made him a lifetime member and declared him “a major prophet of Civil Rights.” (In 1919 Sandburg had written The Chicago Race Riots, July, 1919, and as a newspaper man in Chicago in this period, he printed the NAACP platform.)

A few months after his death almost six thousand people gathered at the Lincoln Memorial to honor his memory. They included Chief Justice Warren of the Supreme Court and another justice, Sandburg’s friend and our first African-American Supreme Court Justice, Thurgood Marshall, various congressmen, poets, and President Lyndon Johnson. In the president’s remarks he referred to Sandburg as a “vital, exuberant, wise, and generous man.”

In 1999 scholar James Hurt wrote that “Sandburg’s Abraham Lincoln: The Prairie Years and The War Years [a condensed version of his six-volume Lincoln biography] is, for better or worse, the best-selling, most widely read, and most influential book about Lincoln . . . . Probably more Americans have learned their Lincoln from Sandburg than from any other source.”

But just as important as all the later acclaim heaped upon Sandburg are the reasons he supported democratic socialism in the first place. In the early twentieth century women and most blacks were denied the vote; most of the latter lived in segregated conditions; unions were weak and workers had few protections; Social Security and minimum wage laws did not yet exist; very few workers received pensions, and child labor and unsafe working conditions were widespread.

Sandburg came from working-class, Swedish immigrants; his father was a railroad worker in Illinois. Son Charles (later changed to Carl) served as a private during the Spanish-American War of 1898. In the early twentieth century he read much on radical politics including works of Marx and other socialists and liked the writings of the socialist muckraking critic Upton Sinclair.

In late 1907 at the headquarters of the socialist Social-Democratic Party in Milwaukee, Sandburg met his future wife Paula. He was a paid organizer for Wisconsin’s Social-Democratic Party; and she helped the party out by translating German socialist writings. She encouraged him not only in his practice of writing poetry, but to become “the socialist poet.” In 1908 his “You and Your Job” pamphlet bore a Socialist Party imprint.

In it he wrote, “I say that a system such as the capitalist system, putting such obstacles as starvation, underfeeding, overwork, bad housing, and perpetual uncertainty of work in the lives of human beings, is a pitiless, ignorant, blind, reckless, cruel mockery of a system.” He referred to Census Bureau data indicating that there were “1,700,000 child laborers, all under fifteen years of age.” He stated that “one reason I’m a Socialist is because the Socialists were the first to fight to abolish child labor, and today the Socialist party is the only one that has dared to declare in its platform that it is unalterably opposed to child labor, and that it will do all in its power to remove all conditions that make it possible for human beings anywhere to be underfed and overworked.”

Both Sandburgs also thought that the socialists were correct to back women’s suffrage. Around this same time, he wrote that “woman is a human being and the equal of man” and added, “In giving women the right to vote, men will but honor themselves, and build toward a greater civilization." He also wrote that “the real knights nowadays are working to save womanhood from the miserable wages paid in sweatshops, factories, mills and department stores, wages that usually drive hundreds of thousands to loveless marriages and careers of prostitution.”

Around 1910, he began working as the private secretary of Emil Seidel, the socialist mayor of Milwaukee, who in 1912 became the vice presidential candidate for the Socialist Party in the 1912 presidential election. During the years 1915-1918 Sandburg wrote articles for the International Socialist Review.

A letter that Sandburg wrote to the French novelist Romain Rolland in late 1919 reveals that by then Sandburg was becoming more pragmatic, without losing his earlier ideals. Although he still clung to some of his earlier radicalism and like many radicals naively placed too much faith in early Russian communists, he also warned about subscribing unreservedly to any creed and program. “If I have a program and a philosophy and a doctrine, crystalized in an organized movement, then the movement is supposed to do for me what I ought to do for myself.” In this letter Sandburg also indicated that he supported politicians from various parties “and was free to vote any ticket or back any candidate.”

One politician he wholeheartedly supported in the 1930s was FDR. In 1933 he indicated that he saw “many striking parallels between Lincoln and Franklin Roosevelt.” In 1935 he wrote to President Roosevelt “that you are the best light of democracy that has occupied the White House since Lincoln.” Strongly supporting FDR’s New Deal, in 1936 and 1940 Sandburg gave various speeches encouraging Roosevelt’s reelection.

Aware that many people were critical of FDR for moving toward war against Germany, Sandburg defended him, saying: “Who wants war? Nobody. Only fools and idiots want war. . . . Yet sometimes the issue comes before a nation of people: Will you fight a war now, or would you deliberately choose another later inevitable war.” During World War II he supported, in a weekly columnfor the Chicago Times syndicate and in foreign broadcasts for the Office of War Information, the war effort and President Roosevelt’s endeavors.

In the 1950s, Sandburg backed the presidential candidacies of his friend Adlai Stevenson. In 1960 he campaigned for JFK.

Yet, throughout the years he supported such Democratic candidates, he maintained his youthful ideals: his desire for a more just society, his sympathy for the poor and for more equality, whether of a racial, gender, or economic variety, and his belief in the need for peace and global understanding. What changed, as he indicated in a remark he made to his friend Harry Golden, was the nature of the Democratic Party. Commenting on the Democratic platform adopted at the 1960 convention, Sandburg said, “That’s a very good imitation of the national Socialist Party platform adopted in Chicago in 1908, when my future wife [Paula] and I were in sparking attendance.”

Besides his poetry, two other examples illustrate well his continuing sympathies. During WWII, when over 100,000 Japanese-Americans were placed in internment camps, he hired two Japanese-Americans to work for him and wrote a column warning against ethnic prejudice. In theearly 1950s, as Senator Joe McCarthy was stirring up flames of intolerance and suspicion of foreign ways, Sandburg collaborated with Paula’s brother, the photographer Edward Steichen, to put together an exhibit of over 500 photographs, gathered from almost seventy countries. It subsequently became the most viewed photographic display in history and the basis for the extremely popular book, The Family of Man, which reproduced the photographs. In 1959, the two men accompanied the display to Moscow, hoping it would further understanding among Cold War rivals.

Thus, what led Sandburg to first embrace democratic socialist ideas were noble ideals and compassion, and he retained those sympathies when he transformed his allegiance to Democratic leaders whom he thought were moving the party in a more progressive direction. But the mature Sandburg was never an ideologue.

Bernie Sanders has taken a somewhat similar journey. Like Sandburg, he has never deserted his youthful ideals, but hopes that the Democratic Party can continue to evolve and manifest more of those ideals. He is no more a blind follower of some foreign socialism than was Sandburg. And to suggest that his thinking is somehow “un-American” is as nonsensical as it would have been to pin that label on Sandburg’s earlier socialist sympathies.