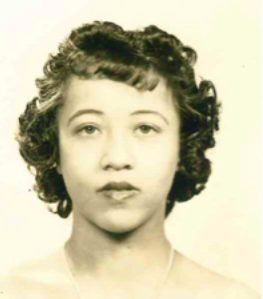 All Julia Baxter Bates wanted was to receive a college education and become a teacher. In 1930s America, however, this basic dream presented a challenge: Bates was black. Admitted to college only due to a clerical error and denied teaching positions because of the color of her skin, Bates turned to civil rights activism with the goal of changing the system that hindered her from seeking the education and career she earned.

She succeeded: Before her 40th birthday, Bates would play a key role in ensuring that no child would be denied access to a public school based on the color of his or her skin.

Activism ran deep in Bates’ family tree: Her great-grandparents smuggled slaves to freedom through the Underground Railroad, her grandfather was Newark’s first African-American school principal and her father and aunt founded the National Association for the Advancement of Colored People’s Morristown and Newark chapters.

As a light-skinned black woman, the scholarly Bates grew up in a predominantly white community in Bernardsville, New Jersey. In 1934, she sent her application, along with the required photograph, to New Jersey College for Women, which has evolved into Douglass Residential College at Rutgers University. Mistaking Bates for Caucasian, the admissions department invited her to interview. When the administrators saw her in person, however, they tried to steer her to a black college where they said she would be “more comfortable.” Bates was steadfast. She was an excellent student, had been accepted to the institution and had every right to attend.

The college acquiesced but denied her the opportunity to live on campus. She stayed with family in Newark and commuted to New Brunswick by train to study English, with the goal of following in her grandfather’s footsteps as a high school instructor.

Denied permission to teach in New Jersey because she was black, Bates grew increasingly frustrated by repeated encounters with racism. She joined the staff of New York’s NAACP headquarters, where she spent over two decades as national director of research and information, working alongside legendary civil rights leaders W. E. B. DuBois, Thurgood Marshall, Walter White and Roy Wilkins.

“Julia was a savvy, intelligent woman who learned at an early age how to be an activist within the system,” says Juanita Wade Wilson, a 1966 Rutgers graduate who Bates befriended when they worked together at a community education center in Newark. “Although she labored behind the scenes, she provided crucial information to the leaders of the civil rights movement.”

During the 1950s, Bates researched and co-authored the winning brief in the historic Brown v. the Board of Education of Topeka, Kansas, which the NAACP used to prove the scientific case against segregation in the nation’s public schools in the Supreme Court. In the field of public education, Brown struck down the Plessy v. Ferguson decision of 1896, which held that as long as separate facilities for the separate races were equal, segregation did not violate the 14th amendment’s equal protection clause. Considered one of the most important decisions of the 20th century, Brown is regarded as the catalyst of the modern civil rights era.

Argued by NAACP chief counsel Thurgood Marshall, the case – a combination of five lawsuits against school districts in Kansas, South Carolina, Delaware, Virginia and the District of Columbia – was the first application of social science to attack a legal precedent.

The research was two-pronged: One angle attacked the precedent set by Plessy by demonstrating that separate public educational facilities are inherently unequal. The other, more controversial, argument sought to provide scientific proof that segregation was psychologically damaging to black children.

In preparing the brief, Bates supplied critical research tracing the history of civil rights in 10 northern states, which was added to contemporary scholarship by psychologists Kenneth and Mamie Clark, who conducted a series of experiments studying the psychological effects of segregation on black children. The Clarks showed that black children responded positively to white dolls over black dolls that had the same features. Their conclusion: “Prejudice, discrimination and segregation” create a feeling of inferiority among black children and damages their self-esteem.

“This brief was controversial because courts traditionally get questions of law, not of sociology and psychology,” says Wayne Glasker, who specializes in African-American history at Rutgers University-Camden. “It was so innovative that lawyers at the time laughed and sneered at it. They didn’t think it belonged in court and knew it would be difficult to prove.”

Although controversial, the brief Bates co-authored was persuasive: On May 17, 1954, the Supreme Court declared segregation in the nation’s public schools unconstitutional.

“Julia Baxter Bates is one of the unsung heroes of the civil rights movement,” Glasker says. “Most people don’t recognize her name or understand the value of her contribution. The lead attorneys get the credit for a legal victory, while the staff researchers who do the background work remain anonymous. This was especially the case for women during this time period.”

To Bates, directing a laser-focused team that armed attorneys with the legal firepower they needed to secure a tough victory was simply her role. “Julia always wanted to be a teacher and believed diligent research was her way of instructing,” says Rutgers alumna Wilson. “The stakes were immense and male attorneys depended very much on a woman. Julia considered Brown her greatest accomplishment.”

Recognition eventually arrived for Bates, who died in 2003 at age 86. In 1992, the Associate Alumnae of Douglass College established the Julia Baxter Bates Fellowship, an initiative spearheaded by Wilson. She was inducted into the Rutgers Hall of Distinguished Alumni in 1996.

Until her death, Bates continued to serve as a mentor for young activists like Wilson. “We met in the 1960s – important years for black people,” Wilson says. “We were on the cusp of political change, and we younger women looked to Julia like a college-level instructor with experience in activism. We wanted to hear her stories. Yes, she acknowledged that the work she did was important, but she reminded us that we all have valuable work we must do.”

This story is part of "Rutgers Revolutionaries," an ongoing series celebrating Rutgers people and innovations that have changed lives around the world.