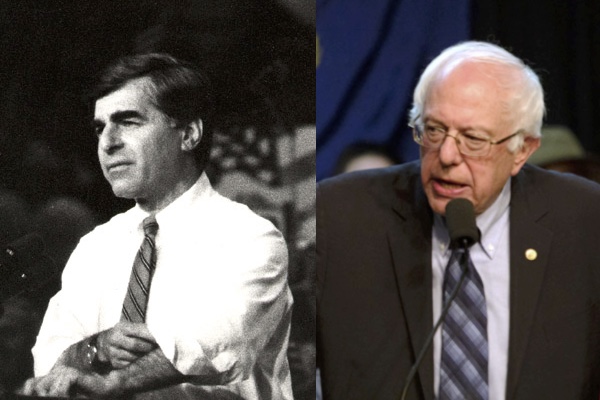 Michael Dukakis at a campaign rally,  Photo by Hal O'Brien

Bernie Sanders says polls indicate he would fare better in the general election than Hillary Clinton. Appearing recently on ABC’s “This Week,” Sanders asked “superdelegates to take a look at which candidate is the stronger to defeat Donald Trump.” This argument has become a major justification for Sanders to remain in the race for the Democratic nomination, despite Mrs. Clinton’s commanding lead. Democrats, argue Sanders’s supporters, ought to nominate the candidate who is more broadly popular with the national electorate.

Bernie Sanders might compete more effectively than Hillary Clinton, but under present circumstances, we cannot be sure of that. The Republicans’ attack ads have been focused on Mrs. Clinton in recent months. Bernie Sanders has not yet been subject to a full-court political press managed by GOP strategists. In the past, Republicans’ assaults deeply undermined Hillary Clinton’s standing with the voters, and they hurt other Democratic presidential candidates whose election prospects looked promising before they came under withering attacks. Current judgments about Sanders’s effectiveness in a race against Trump are highly speculative.

Hillary Clinton’s slippage in the polls demonstrates how a candidate can quickly lose favor after coming under media scrutiny and criticism. When Hillary Clinton served as Secretary of State during Barack Obama’s first presidential term, her favorability ratings often ranked above 60%. They reached 69% when she retired as Secretary of State.  At that time, according to a Wall Street Journal/NBC poll, just 25% of Americans surveyed disapproved of her performance. After Hillary Clinton announced she would run for the White House, Republicans launched a campaign aimed at tarnishing her image. Repeatedly, they described Hillary Clinton as untrustworthy and dishonest. Republicans blasted her use of private email accounts and questioned her handling of the Benghazi incident.  Many factors influenced Clinton’s slide, including questions raised by Bernie Sanders during the primaries. Still, Republican efforts to undermine Clinton’s standing made a significant impact. An NBC News poll in May, 2016 reported that Mrs. Clinton’s favorability rating had dropped to 34%, while 54% of registered voters had a negative or somewhat negative opinion of her.

Scholars and journalists are familiar with other notable collapses in popularity when candidates came under assault. One of the most notable examples relates to the fast descent of Democratic candidate Michael Dukakis during the 1988 presidential campaign. Shortly after the Democrats chose Dukakis at their national convention, 55% of Americans surveyed by Gallup favored Dukakis for president, while only 38% preferred Republican George H. W. Bush. Then the GOP’s opinion-shapers went to work. Led by a clever tactician, Lee Atwater, spots on television raised questions about the Democrat’s supposed strengths (Dukakis presented himself as a skillful administrator). Ads claimed Governor Dukakis allowed pollution to foul Massachusetts’s waters and reported that Dukakis backed a furlough program for prisoners that enabled a brutal rape and assault.

Republicans were not entirely to blame for the Democrat’s defeat. Michael Dukakis stumbled during the campaign. He gave an unconvincing response to a question about rape during a televised debate. The Democratic candidate looked ridiculous in a campaign photo that showed him smiling in a tank. These and other mistakes as well as criticism from the Republicans helped George H. W. Bush to secure a strong electoral victory, 426 to 111.

Bernie Sanders might experience a rapid, Dukakis-like decline if the GOP aims its media weapons at him. Republicans have been subjecting Hillary Clinton to unrelenting political fire over several months, but they have not offered much criticism of Bernie Sanders. This neglect reflects a calculated strategy. Republicans hope Sanders’s extended primary campaign will continue to harm Mrs. Clinton’s approval ratings. Some GOP leaders refrained from attacking Sanders because they hoped, up until a few weeks ago, that he could secure the Democratic nomination. They considered the Vermont senator an easier target in the general election than Hillary Clinton.

Until now, Republicans have not said much about Bernie Sanders’s commitment to “democratic socialism.” If Sanders overcomes the difficult odds against him and somehow emerges as the Democratic nominee, Republicans are likely to make socialism a central theme in their attack. They will characterize Bernie Sanders as a radical and claim his presidency will ruin the economy and destroy jobs. That debate might serve Bernie Sanders and the American people well, bringing to light democratic socialism’s egalitarian ideas and its achievements in northern Europe. But it could also give critics of socialism opportunities to tap fears that dominated American politics long ago, including worries about government’s overreach and threats to freedom.

Evidence of fast slippage in popularity when Hillary Clinton and Michael Dukakis came under attack does not prove that Bernie Sanders would lose in November if he managed to win the Democratic nomination. Sanders’s progress has been one of the great surprises of the current political season. When the primaries began, pundits did not expect that he would go far, but he has emerged as a formidable candidate. Sanders effectively addressed the public’s concerns about economic inequality and the influence of great wealth in American society. He excited idealism, hope for democracy, and interest in political participation. Sanders's recent wins in state primaries were impressive.

Bernie Sanders is a strong competitor, but claims that current polling clearly demonstrates he is better equipped than Hillary Clinton to defeat Donald Trump are debatable. Bernie Sanders has not been broadly tested in the hardball game of American politics. His ideas have not yet been subjected to an intensely negative campaign orchestrated by the GOP’s election strategists. Mrs. Clinton has been under that kind of assault for months. Furthermore, Hillary Clinton has thrown only gentle punches at Sanders, because she does not want to alienate his many supporters, including millions of young voters. Sanders has profited from a relatively quiet Republican opposition and a relatively mild response from his Democratic opponent. The situation will change dramatically if Sanders manages to beat the odds and emerge as the GOP’s principal target.