Want a Happy Ending to the Crisis over Police Shootings? 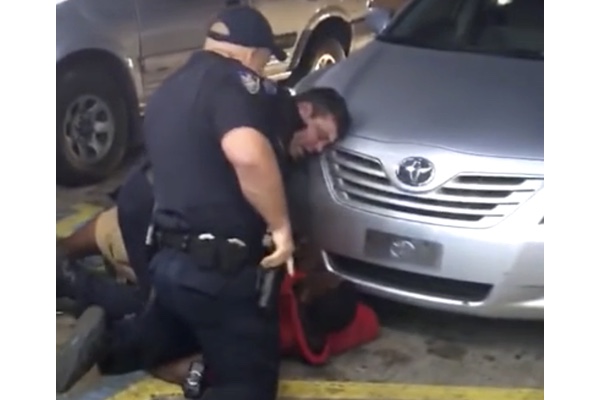 Americans love happy endings. Muhammad Ali regained his heavyweight championship in a prosaic return to the ring. Jackie Robinson crossed big league baseball’s color line as a Brooklyn Dodgers star. Ali, disease-ridden as he held high the Olympic Torch in Atlanta near his life’s end was, on a Wheaties box, called our “most beloved athlete.” Yet government and society called him a criminal, charged with draft evasion, when Muslim religious beliefs compelled Ali to refuse to fight in Vietnam. Robinson’s on-field exploits won him the first-ever Rookie of the Year Award and election to baseball’s Hall of Fame. Yet they could not shield him from death threats while playing. Nor did they earn Robinson a management role anywhere in baseball when he retired. “I Never Had It Made,” his memoir’s title claims.

These facts – and many like them – prove Frederick Douglass right when he leveled his famous accusation of racist hypocrisy at an Independence Day audience in Rochester, New York in 1841. “What to the American slave,” Douglass asked, “is your Fourth of July, a day that reveals to him more than any other day of the year the gross injustice and cruelty to which he is the constant victim.”

Walking Boston’s Freedom Trail three weeks ago I wondered how Douglass now would judge us. The graves there of Samuel Adams, John Hancock and Paul Revere remind us that they and other men pledged “our lives, our fortunes and our sacred honor” to a democratic revolution. While we laud them as patriots the British would have hanged them as traitors. The churches that were planning sites for protesting oppressive parliamentary laws and destroying 46 tons of British tea worth ten thousand pounds sterling (or one million dollars) were later stations on the Underground Railroad, a striking moral consistency.

I admired how the founding generation dared greatly for its freedom and ours. I marveled at how they withstood the hardships of a seven-year war to defeat what was then the world’s strongest nation. I felt ashamed that we can’t just get along! I wondered with this year’s young black martyred men in mind whether we will ever achieve racial justice and affirm our nation’s founding ideals.

Then Alton Sterling died the next day and Philando Castile on the day after that, followed by retaliatory killings of five police officers, with political leaders pleading for peace while chanting harmony clichés. Wouldn’t Douglass demand we do better? Why don’t we? How is it that a nation able to put men on the moon and return them to earth in the sixties struggles fifty years later merely to have honest conversations on race?

With regard to “police behavior in minority communities,” which Dr. Martin Luther King Jr. in 1966 at Detroit called “the nation’s main racial problem,” we clearly know what to do. There’s a new din about old ideas: appoint independent special prosecutors to hold miscreant police officers accountable for their actions, rescind the post-9/11 militarization of urban police departments, review and revise their use of force policies, expand their mandatory (and transparent) use of body cameras, require institutional and implicit bias training for all police personnel, for starters.

Revere, Hancock and Adams made revolutionary success a priority. We seek safety in a racial status quo by contrast – as when the Continental Congress for the sake of unanimity acceded to southern delegates’ demands by deleting a ban on slavery from Thomas Jefferson’s draft Declaration of Independence – and when the later Constitutional Convention tabled the issue at Virginian James Madison’s behest.

Madison in retirement, according to a visitor to his Montpelier plantation, “was adamant that emancipation must be ‘gradual, equitable and satisfactory to the individuals immediately concerned, and consistent with the existing and durable prejudices of the nation.” Jefferson at Monticello and George Washington at Mount Vernon similarly placed prosperity and prejudice above the morality of emancipation. The former advocated “improving slavery” in stages toward its eventual demise, never freeing the slaves on his own plantation at Monticello. The latter was likewise paternalistic in life, though in his will granted his salves ultimate freedom (after Martha’s death).

Fear lay at the root of their actions, fear of revolts by men in bondage or revenge by those set free. Guilt over the sinful subjugation of human beings joined with fear to rationalize inaction: Madison wrote of blacks’ “physical peculiarities” while Jefferson called them “as incapable as children.” Both claimed blacks and whites simply could not ever live together as equals. Do we at present seem that different if we read between the lines of recent remarks about race?

Attorney General Loretta Lynch told a House hearing of her “hope that we can have the difficult conversations about race and policing” toward common ground from “the pain of law enforcement who feel under attack” and “the pain of those who feel they do not have an opportunity to participate fully in this great democracy.”

Donald Trump, when Fox News’s Bill O’Reilly asked whether there is “a problem between blacks and whites,” asserted that “We have a divider as President, he’s the great divider, and it’s worse than it’s been at any other time.” Trump, asked how he as President would improve race relations, said, “Well, one thing is spirit. This country doesn’t have any spirit. You can say that’s a general statement but it’s more than a general statement. The country needs a cheerleader.”

Hillary Clinton reprised Abraham Lincoln’s “House Divided Speech” in Illinois, committing herself to “a hard look at our laws and our attitudes and taking a firm stand against those who would roll back the rights that so many sacrificed so much for.” Clinton placed the righteous rage at all racial killings in the context of “fear and anxiety” wrought by “economic disruption, dislocation and the pessimism of many as to whether America has anything for them or even cares about them.” She pledged within her first 100 days as President “the biggest investment in good-paying jobs that we’ve had since World War II.”

Many cheer Clinton’s stance. Still more embrace Lynch’s call for conversations; President Obama’s reasoned passionate tone on the televised ABC/ESPN Town Hall on race as he answered questions from Alton Sterling’s son Cameron, a Milwaukee police official, an NAACP officer, and others modeled how we might replicate that exchange.

Yet fear of rejection, fear of black anger and time-worn white denial of racism’s institutional nature and depth may prevent honest conversation. Trump claimed “it’s happened to me” when O’Reilly asked whether Trump shares “blacks’ beliefs that the system is rigged against them” and he speaks for many working class or out of work white Americans who feel marginalized, begrudge the cry that “Black Lives Matter” and fear that authorities will make concessions to blacks to appease them, preventing unrest but neglecting white needs.

New York’s 51-member City Council, poised to pass a legislative package of police reforms to protect constitutional rights against racial profiling, had Melissa Mark-Viverito, its president, prevent a floor vote because, she said, the NYPD had agreed to “make voluntary internal changes.” Her anti-democratic action meant the force of law would not ensure reforms would be comprehensive and effective in a hierarchical organization known for its rigid “blue wall” culture.

“We were interested in working collaboratively with the Police Department,” the Council President declared. “Obviously we did not get 100 percent of what was laid out in the bills.” Officers would monitor their own behavior under her agreement, the New York Times added, but what does that advance?

New York civil rights attorney Norman Siegel wrote in the Amsterdam News (America’s oldest African-American newspaper) that he and Borough President Adams “have held discussions with the NYPD” about implementing their town hall proposals, crafted a full year ago. Where is the urgency? If not now, when?

Leadership seeks transformation not stasis when crises occur. Professionally guided conversations that elicit all perspectives can forge the consensus on goals and methods that puts people to work. Street protests that “petition for a redress of grievances” in the First Amendment’s words pressure conversants to speak honestly, concretely, without platitudes or clichés.

Government agencies, private foundations and media outlets, with the resources to sponsor such conversations in cities across the country, could channel the emotional energy that erupts from racial conflicts in positive productive directions. With consensus forged once people felt heard, and their ingenuity applied to tasks at hand – to enhance cultural understanding, ensure fair and accurate media (neither sensational nor stereotypic) treatment of our nation’s diversity, provide equitable funding for inner city and suburban public schools, and rebuild blighted urban communities as did Senator Robert Kennedy’s pilot Bedford-Stuyvesant Restoration Corporation in the Sixties – we might transform the surroundings in which races relate.

We would then have some real happy endings.