Thomas Fleming is the author of The Great Divide, the Clash between George Washington and Thomas Jefferson that Helped Define America. 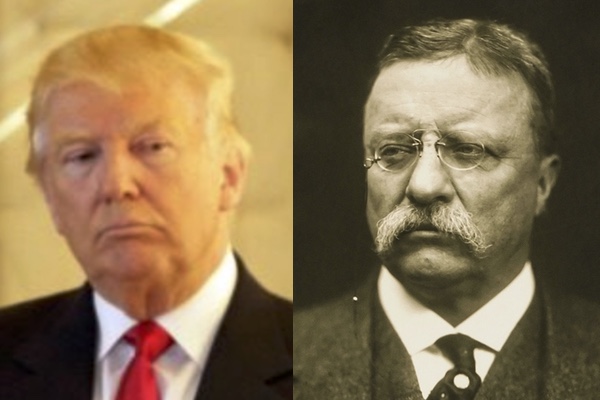 If Donald Trump hoped to win this election, he needed a new role model. He had flirted with a half dozen, from Barry Goldwater to Ronald Reagan to Richard Nixon. The latest changes in his campaign staff make it clear that he has decided he only needs one model – the one he sees when he looks in the mirror each morning.

Too bad. Historian Daniel Ruddy has published a book about a new dynamic model that could have won Trump the election. In a mind-bending tour de force, Ruddy has demolished the standard image of Theodore Roosevelt as an early 20th Century liberal. Again and again, Ruddy smashes the myths about Roosevelt and reveals he was a conservative reformer, fueled by dynamic energy and ferocious contempt for the Democratic Party leaders of his day like William Jennings Bryan and Woodrow Wilson.

Seen from this point of view, Roosevelt reveals an uncanny ability to back causes that spoke directly to the people, even when his own Republican Party opposed them. A good example was the franchise tax, which he pushed through the New York State legislature when he was governor. Theodore said it was intended to relieve the “improper and excessive portion of the general taxes” paid by the “the farmers, the market gardeners and the mechanics and tradesmen” of the state. He declared a corporation which “derives its powers from the state should pay to the state a just percentage of its earnings as a return for the privileges it enjoys.” One newspaper called this tax “the most radical departure in tax legislation New York State has ever known.”

The tax established a political stance that would pervade TR’s presidency. Again and again he enacted policies over the objections of the organized leadership of the Republican Party but with the support of Democrats. He calculated that the anger he generated among “machine Republicans” would be more than offset by his increased popularity among the people. By the time he left the governorship he had created a tax system that increased the revenue of New York City alone by $15 million yearly. That was enough money to build a new Brooklyn Bridge every year.

Next Ruddy tackles the trustbuster myth. TR supposedly waged war against monopolistic corporations, breaking them up in order to protect American consumers from ravenous captains of industry who were intent on stifling competition and amassing mountains of wealth for themselves. Ruddy demonstrates that TR’s policy toward the trusts was far more complicated. By the end of his presidency he was more a trust regulator than anything else. He praised “good trusts” as he called large corporations that complied with the law. They were encouraged to promote the nation’s economic progress under what would later become the Federal Trade Commission

During the generation that preceded TR’s presidency, the United States had undergone a tremendous economic and social transformation. The industrial revolution wrenched the country out of its agricultural past and thrust it into an unstable present where many Americans lived in densely populated cities rather than on isolated farms. This rapid change created new problems that soon found an outlet in legitimate public complaints about the poor quality of life for those on the lower rungs of society.

Worse, Roosevelt noted that the rich flaunted their wealth. As a consequence public opinion turned against the industrial magnates and Wall Street financiers. Leftist firebrands generated widespread rage against the monopolistic one percent.

Meanwhile Roosevelt was forming his own opinion about the trusts. Catapulted into the presidency by the assassination of William McKinley, TR noted with mounting alarm the growth of popular unrest and anger about the power of the trusts. He soon began saying that the government had a “right to interfere” in their operations for the public good in the same manner in which the government regulated banks. This call for sensible legislation went nowhere.

TR decided he had to show the American people he was on their side, that he was a trustbuster as passionately devoted to their interests as the Democratic populist William Jennings Bryan. TR picked a fight with the man recognized as the paramount leader of the nation’s plutocracy – the most powerful financier in the world, J.P. Morgan.

In April 1901 a newspaper headline blared “Octopus Gigantic: The Trust of all Trusts Planned.” It was an announcement that Morgan was about to create a new combination of wealth and power, joining together the Northern Pacific and Great Northern railroads, to form the second biggest corporation the world after US Steel.

TR’s response created a sensation. He announced his Justice Department would begin legal proceedings against J.P. Morgan’s Northern Securities Company with the goal of dissolving the combination as an illegal “restraint of trade” under the Sherman antitrust law. This law had been on the books for a dozen years but had never been enforced.

The news shook Wall Street like an earthquake. The market capitalization of Morgan’s railroad combination dwindled from $400,000,000 to $55,000,000 in a single day. An angry financier allied with the Morgan interests observed wryly: “the business of the country appears to be conducted at Washington now.”

As the stunned the Republican Party pondered TR’s decision to prosecute, they were forced to recognize that Roosevelt had landed a political masterstroke. His old friend Sen. Chauncey Depew declared “Roosevelt’s stock is going up with the people every day.”

The Democratic Party was baffled by TR’s new policy. One of their leaders called him “a weird magician of politics.” Meanwhile Wall Street reacted with predictable wrath when it learned that the Republican Party was no longer in its pocket. Refusing to accept the change with quiet grace, J.P. Morgan and his allies used the newspapers they controlled to unleash a barrage of criticism against Roosevelt

TR brushed aside Wall Street’s fulminations as nothing more than “wooden-headed stupidity.” His self-confidence grew even stronger when the midterm elections of 1902 gave the Republicans control of Congress. It was a national referendum on TR’s leadership and he won with the popular wind at his back. Soon he was attacking John D Rockefeller’s Standard Oil Trust, winning more cascades of public approval.

Meanwhile his attack on J. P. Morgan’s Northern Securities railroad combination went to the Supreme Court, which ruled that it was “a restraint of trade” under the Sherman antitrust law, and must be dissolved. The New York World, a newspaper that was usually a fierce Roosevelt critic, ruefully admitted: “Politically the effect of the decision can hardly be exaggerated. It will greatly strengthen Roosevelt as a candidate. People will love him for the enemies he has made. ” With the scalps of J. P. Morgan and John D. Rockefeller on his belt, Roosevelt cruised to an easy victory in the 1904 presidential election.

Need we say more? Here is the style and not a little of the content that Mr. Trump needed to give him a fighting chance to become president of the United States. Too bad he’s decided to go it alone.