Jennifer Young is working on her doctorate in history at New York University. 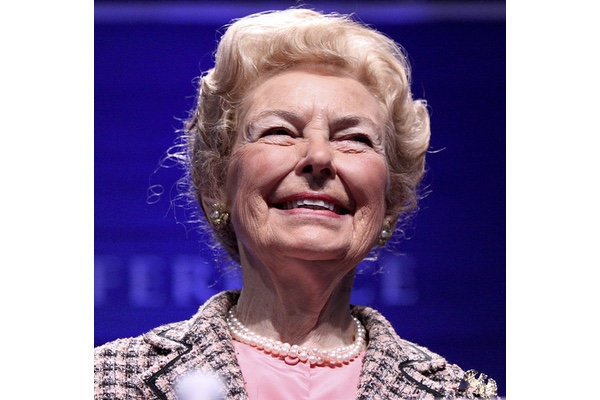 The death of the famously anti-feminist pundit Phyllis Schlafly on September 5th lit up the Twittersphere and prompted Princeton historian Kevin M. Kruse to laud Schlafly’s tactics, if not her ideology. As a political activist, Schlafly almost single-handedly scuppered the passing of the Equal Rights Amendment (ERA) in 1972, as Kruse put it, “working to unite housewives of different faiths in different regions” in a startlingly effective grassroots coalition. For historians of labor and working-class feminist movements, Schlafly’s goal, and her tactics, sound familiar: many female activists throughout the 20th century also protested the ERA, because it did away with protective legislation for women workers that these activists had fought for. Without special health and labor laws that treated women workers differently from men, such as state laws regulating hours worked before and after childbirth, creating restroom facility regulations and manual labor limitations, these activists believed, working-class women would lose more than they had gained.

The Equal Rights Amendment, first proposed in 1923 by suffrage activists Alice Paul and Crystal Eastman, was championed by middle-class women affiliated with the National Woman’s Party, but it was opposed by the Women’s Joint Congressional Committee and other coalitions that represented the interests of working-class women. This rift complicated alliances between women’s activist groups, and underscored the ways that gender politics intersected with the politics of class and labor in the United States.

Rose Schneiderman, a labor activist who came to prominence in New York’s Women’s Trade Union League in the 1910s, fought bitterly against the ERA her entire life. Historian Annelise Orleck explains that women like Schneiderman and her cohort of activists, many of whom were Jewish and Italian women from immigrant backgrounds, did not consider themselves “feminists,” since they believed that the term applied more specifically to middle class women’s activists who had the “luxury” of focusing specifically on gender issues. Schneiderman believed that the idea of absolute equality between men and women was a “meaningless abstraction” when working women experienced such an extreme measure of workplace discrimination, and had little legal recourse. Schneiderman came of age at time of the Triangle shirtwaist factory fire, in which 123 young women lost their lives due to lax worker safety protections. This was also the era of large-scale garment industry strikes led by women, such as the “Uprising of the 20,000” female garment workers in 1909. In 1915, an observer coined the phrase “industrial feminism” to describe this type of activism by women on behalf of women’s rights. Schneiderman herself coined the famous slogan, “Bread and roses,” in 1911 as a shorthand way of describing the need for a living wage, housing, and other basic rights alongside the need for education, community, and self-development.

A key architect of FDR’s New Deal legislation who helped shape the National Labor Relations Act and the Social Security Act, Schneiderman also left her mark on New York’s labor and social welfare legislation when she served as Secretary of Labor from 1937-1943. The same year Schneiderman left office, the powerful International Ladies Garment Workers Union expressed strong opposition to the proposed Equal Rights Amendment, which was then being considered by the Senate Judiciary Committee. In a letter to Senator Carl A. Hatch, chairman of the subcommittee considering the amendment, a union representative declared that the ERA was “anti-Women,” and would, in effect, destroy all protective legislation for women workers after decades of work by progressives and union leaders to enact minimum wage and maximum work-week laws to sanitary and safety codes.

By the 1950s, Schneiderman had modulated her initially virulent anti-ERA response, supporting a compromise, the “Hayden rider,” which added a section to the ERA preserving protective legislation for women. Although the ERA passed the Senate with the rider in 1953, many ERA activists, including the National Woman’s Party, refused to support this proposed change, and the amendment was put on the shelf once again. Grassroots support for the ERA continued to grow, however. In 1967, the National Organization for Women endorsed the ERA, and in 1969 Representative Shirley Chisholm spoke in favor of it on the floor of Congress. By the time Schneiderman died in August 1972, at the age of 90, almost two dozen states had ratified the ERA. The following year, the AFL-CIO, the largest federation of unions in the country, which had held out on officially supporting the ERA, finally voted to endorse it. But the bitter division separating working-class women’s activists and labor leaders from pro-ERA, middle-class women’s activists continued into the 1970s. As one woman labor leader testified in a Senate hearing in 1970, “To deprive women of protective legislation, for as long as one second, frustrates their basic constitutional right to safety and the pursuit of happiness and denies to them the fundamental reason for their participation in a government of law.”

By the end of the 1970s, when Schneiderman and her colleagues who had come of age in the era of industrial feminism had departed the scene, a consensus on the benefits of the ERA began to knit together the various coalitions of women’s activist groups. It was this moment, however, that marked the rise of conservative women activists like Phyllis Schlafly, who brought home-baked goodies to politicians in order to convince them that the ERA meant that women’s rightful place in the home was being corrupted.

As Ann Friedman remarked in New York Magazine last week, today’s activists have learned a lot from anti-equal rights activists like Phyllis Schlafly. Schlafly’s scorn for “the right to be different” ironically highlighted the deeply interconnected struggles within the social justice movement, from women’s rights to gay rights to black equality. So if we remember Schlafly as an example of women’s political empowerment, even as she fought against it, we should also recognize the achievements of women like Rose Schneiderman, who paved the way for future generations of social equality activists of all kinds.

In her presidential platform, announced at this summer’s Democratic National Convention, Hillary Clinton declared that “Democrats will fight to end gender discrimination in the areas of education, employment, health care, or any other sphere,” and, that “After 240 years, we will finally enshrine the rights of women in the Constitution by passing the Equal Rights Amendment.” It remains to be seen whether the ERA will finally indeed become official, but it’s safe to say that, if it does, Phyllis Schlafly and Rose Schneiderman would probably disagree about whether or not it’s a step in the right direction.