Should We Be Bothered that Hillary Clinton Failed to Disclose Her Illness? 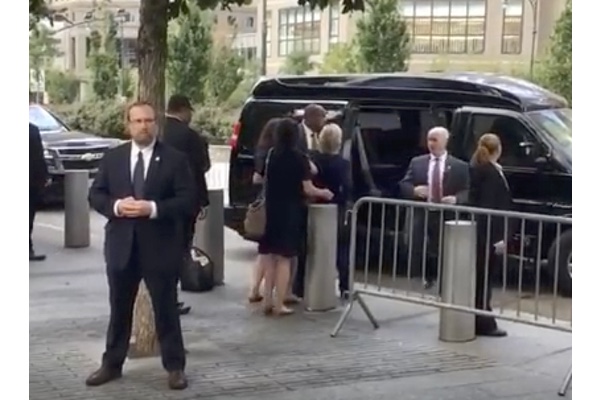 Within minutes of the news that Hillary Clinton had been diagnosed with pneumonia rightwing commenters began calling her out on Twitter for the delayed announcement.  Her doctors made the diagnosis Friday.  They only revealed it Sunday afternoon after she had cut short her appearance at a 9-11 ceremony.  As one tweeter observed:  “Hillary's physician now says it was pneumonia -- so 'overheated' was another lie?”

The critics were right to draw attention to the gap.  Her campaign had obviously made a strategic decision not to disclose the diagnosis on Friday when it was made.  Things like this don’t just happen in a campaign.  They’re done by design.

Should we be upset?

The obvious answer is that we should be.  Presidential candidates and presidents should be expected to disclose the state of their health.  If there’s a change in their health status this should be disclosed promptly.

But we shouldn’t be surprised by the Clinton campaign’s decision to withhold the information.  As I discovered when I wrote a book about presidential ambition the subject presidents and presidential candidates have lied about the most since the late nineteenth century has been their health.

A quick review of the facts reveals that the deception is bipartisan and has been committed by both good presidents and bad ones.  The most infamous case of all is John F. Kennedy’s.  When he was running for president in 1960 a rival, Lyndon Johnson, hoping to block JFK’s momentum, leaked the news that the Massachusetts senator suffered from Addison’s disease, which affects the adrenal glands and can lead to death.  Robert Kennedy quickly squelched the news, denying that his brother had ever received a diagnosis of Addison’s.  JFK went on to win his party’s nomination and the presidency.  (He named LBJ his vice president, confirming the old adage that politics makes strange bedfellows.)

In office Kennedy battled numerous health problems.  He often couldn’t get out of bed in the morning without taking a shot prepared by his physician that consisted of a cocktail of strong amphetamines.  He was often in pain. Once he jabbed a friend in the leg with a needle to convey the agony of what he frequently went through.

For several decades evidence of JFK’s various illnesses dribbled out, leading historians like Thomas Reeves to conclude that the president was a man of low character and giving the lie to pictures like those showing him playing touch football on the lawn of the Kennedy compound at Hyannis Port that left the impression he was in robust health. Then in 2002 historian Robert Dallek revealed in a story that made front-page news in the New York Times that he had been given access to medical records that proved that the president had in fact suffered from Addison’s.

Other presidents who have deceived the public about their health include, in chronological order, Woodrow Wilson, who covered up the evidence of his multiple debilitating strokes; Calvin Coolidge, who apparently decided not to run for a second term as president after he suffered a hushed-up heart attack; Franklin Roosevelt, who concealed from the public the extent of his disability from Polio when he ran for his first term and pretended to be in good health when he ran for a fourth, though at the time he was near death; Dwight Eisenhower, who never disclosed that he was confined to a hospital bed for a month in 1949, possibly after suffering a heart attack; and Ronald Reagan, who we now know came closer to dying after he was shot by John Hinkley Jr. than the White House let on.

Why do presidents continually feel compelled to deceive the public about their health?  The answer can be found in the case of the first president caught lying about his health:  Chester Arthur, whom hardly anybody now even remembers was president.  After succeeding James Garfield, the president who was shot just a few months into his term at Union Station in Washington DC by a disappointed office seeker, Arthur was diagnosed with Bright’s disease, a fatal kidney disorder.  After his diagnosis Arthur insisted on keeping the public in the dark about his illness for the main reason that he didn’t want voters worrying that they might be in danger of losing a second president in a row, this time from disease instead of a bullet.

The lesson Chester Arthur learned was that a president’s health is one of those kinds of issues that is susceptible to public debate.  Everybody has an opinion about health as it’s a subject with which we are all familiar.  If he had any hope of keeping the public’s attention on the issues he wanted people to think about, he had to conceal his illness.  He was also mindful of the danger that news about his health might have on perceptions of his leadership.  Voters, like primates in the jungle, look up to leaders who are strong.  A physically weak leader can give the impression they’re politically weak.

These are the same considerations that drove Grover Cleveland a few years later to conceal his diagnosis of mouth cancer.  Cleveland was just a few months into his second term when one of the worst depressions in American history got underway, the Panic of 1893.  Just as evidence of the panic was emerging Cleveland discovered a soft spot in his upper jaw.  When doctors investigated they found a cancerous lump that had to come out.  On the weekend of July fourth the president climbed aboard a yacht in New York City and sailed out to sea, where doctors performed an operation that very well could have ended the life of the portly president.  He lived, fortunately, but gave the public no hint of what had transpired.  When reporters noticed his absence an official was sent out to lie.  Only one member of the cabinet was told the truth.  Not even the vice president was informed.

Should we be bothered by these politicians’ pattern of deception?  Of course.  In a democracy the people have the right to know the status of their leaders’ (and would be leaders’) physical health.  But it’s also understandable why leaders have so often misled the public about their health.  When their health becomes an issue they lose what is arguably a president’s most important power:  the ability to help set the national agenda.

Some people have been wondering why Hillary Clinton didn’t immediately disclose her diagnosis.  The answer her partisan critics give is that she’s a congenital liar.  The real answer is more complicated.  History suggests she probably was hoping to muddle through.  That way she could keep the country’s focus on her agenda and not her health.  Now, however mild her illness turns out to be, she has lost that chance for at least several days and perhaps several weeks.  Given that there are less than two months left before Election Day, that’s time she really cannot afford to lose.