It’s Time to Give Herbert Hoover a Second Look: An Interview with Biographer Glen Jeansonne 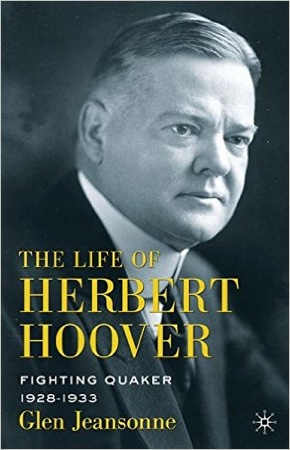 Herbert Hoover? Really? Yes, really, says Glen Jeansonne, Professor of History at the University of Wisconsin-Milwaukee. In what his publisher (Palgrave Macmillan) calls the first definitive biography of Hoover ever written, Jeansonne makes the strongest case anyone ever has for Hoover’s presidency. Jeansonne is the author of books on Huey Long, Gerald L.K. Smith, and Barack Obama. This interview was conducted by email.

Why did you decide to write a biography of Herbert Hoover? Was this a project of passion?

In my first year in graduate school at Florida State University, I took a course on America, 1900-1945. I asked my professor if I could write my term paper on the Herbert Hoover administration. He replied, “No, because nothing happened.” I forged ahead and wrote a sympathetic paper about Hoover anyway. My professor returned it marked “A+” and scribbled: “This is the best paper in class.” As a mature scholar, I had a broader goal as well. Historians and the public habitually give credit to a president for everything good that occurs during their administration and blame them for every bad thing that happens without considering the relationship between the incumbent and the event. This is simplistic. I wanted to encourage historians to adopt a more sophisticated approach toward judging presidential administrations.

In chapter 1, you indicate that several of Hoover’s Quaker traits handicapped him as president. How would a candidate running for president in the modern era be viewed with these same traits?

Hoover was an introverted personality in a profession that rewards extroverts. He was shy, modest, and humble, not given to boasting. He enjoyed the work of the presidency and the potential for significant accomplishments but he did not enjoy campaigning and boasting about himself. Mentally, he was one of the most adept presidents we have ever had, but temperamentally the shoe did not fit. Hoover’s personality traits were common among Quakers and were instilled in him by the Quaker parents and relatives who raised him, and enduring lifelong. He also enjoyed solitude, peace, and being amid nature. It would be even more difficult in the modern era for someone with Hoover’s personality traits to be nominated for President, much less win a national election. Most candidates now campaign in all fifty states. Hoover would not have been effective on television and the mass media such as Twitter and Facebook. I think he would shy away from politics, but he might accept an appointive position, such as in the Cabinet.

Why were Hoover’s Quaker traits better suited to him as Secretary of Commerce than as President?

Hoover did not have to campaign for election or re-election to become Secretary of Commerce. Presidents Harding and Coolidge did not micro-manage him. He dealt largely with problems and conditions that affected business and business was his profession. He saw opportunities that would expand and improve business and seized them. Commerce had been an obscure Cabinet position and no Commerce Secretary had ever been elected President. Hoover injected a dose of adrenalin into it, used his imagination, and increased foreign and domestic trade. He was much better speaking to small groups than he was to the masses.

As head of the Food Administration under President Wilson, Hoover was extremely efficient and created a surplus of farm goods for U.S. allies. Could it be argued that Hoover was too successful?

After the war, farmers continued to produce at this level, even though the demand was no longer there, which contributed to falling crop prices. This problem occurs after nearly every foreign war. Hoover had no statuary authority to limit farmers, but he offered several mitigations. Farmers who grew imperishable crops could collectively construct huge silos where they would store their crops, releasing them a few at a time for sale rather than flooding the market at harvest time. They could learn to diversify their crops, growing less of staple products such as wheat and corn. With small subsidies, the government might encourage farmers to end the farming of marginal lands, using them as pastures and reducing erosion. Hoover believed a minor tariff could help farmers eke out a living, but the tariff should be limited to farm products alone.

Prior to taking office, you determined that for an investor, “a bet on Hoover was a safe bet.” At what point in his career did this change? Why?

The quote cited refers to Hoover as an engineer and was meant to refer only to the engineering portion of his career. In that context, it is quite accurate.

Hoover once said, “We no longer have the right to think in terms of our own generation.” How did this belief guide him throughout his political career?

Hoover did not intend for his statement to refer solely or exclusively to politics. It refers largely to his love of children, which was lifelong. Children should be nourished with love and allowed to grow up gradually. They should be given opportunities for wholesome play, to make friends, enjoy the outdoors, develop hobbies, and receive a sound education, which led to a vocation. Math, science, and reading were especially important. Hoover hated to see starving children and this led to many of his food relief efforts. Many of his major charities were devoted to the recreation and vocational training of children. His favorite was the Boys Clubs of America.

During his presidential campaign, the New York Times reported that he was the “best qualified president we have had for decades.” Did this place unrealistic expectations on Hoover’s presidency? Were expectations too high?

As a generalization, the statement was accurate, but it did raise expectations too high. Few presidents can end a major depression or a major war in a single term. It is likely the stock market would have crashed in 1929 whomever would have been President and that the Great Depression would have ended in 1941, when we entered World War II, under any President. The Depression was worldwide, not American-made, and could not be ended in one nation alone. It is also likely that any President elected in 1928 would have been defeated in 1932.

Hoover was a standout success in Europe. But not in America. What prevented him from being a success in America?

Except for failing to end the Great Depression in one term, which no one could have done without a war, Hoover was a success in America. A poor orphan, he became a star student at Stanford, graduated to become the Great Engineer, became a benefactor of many charities, the Greatest Secretary of Commerce in history, and saved the Mississippi Valley during the Great Flood of 1927. He organized, rationalized and made business more efficient and was a leading conservationist.

Why didn’t Hoover’s experiences with food relief in Europe translate into success in America? Did he hold Americans to different standards?

In Europe and Russia people were literally starving to death and Hoover pulled them through the emergency but by no means restored normal food rations. In America, people were hungry but very few, if any, actually starved. Americans had a higher standard of living than most Europeans and were not enthusiastic about minimalistic diets. Further, in Europe Hoover was the sole food czar while in America he had to surmount a balky Congress, the bureaucracy, and the opposing party. No one in Hoover’s place, facing the same obstacles, could have done better. FDR, for example, had a two-thirds majority of his own party in Congress.

Toward the end of his presidency, did Hoover’s political agenda to fight the growing Depression ever run counter to his belief in a decentralized government?

In normal times Hoover believed in a government built from the bottom up rather than the top down. Local people know local problems best. But wars and depressions are not ordinary times. Hoover was willing to expand the government, and then, in stages, ramp down when conditions improved. He preferred a larger government to suffering people and he never used government jobs or money, as FDR did, as political patronage. My father worked for the Civilian Conservation Corps and told me first hand.

Was Roosevelt’s unwillingness to work with Hoover during his lame duck period a factor in worsening the conditions? If so, did it help prolong the Great Depression?

FDR’s self-serving decision not to cooperate with Hoover during the interregnum was a selfish, tragic mistake. He also instructed Democrats in Congress not to vote for Hoover bills or appointees. FDR wanted to enter office at the nadir of the Depression so he could take total credit for the recovery. Ironically, Roosevelt borrowed many of his ideas for the New Deal from Hoover. During the interregnum a bank crash worse than the 1929 crash occurred. Foreign nations and private banks abroad defaulted on war debts. Uncertainty ruled. FDR did not discuss a plan to end the Depression during either the 1932 campaign or the interregnum, probably because he had none. His chief attack on Hoover was that he had spent too much money and that his administration would balance the budget.

Even though Hoover and Roosevelt were from different political parties, did they share any similarities in their approach to bringing relief to the American people?

At what point did Hoover feel that he began to redeem his political reputation after his presidency?

Factors included his friendships with Truman and President Dwight D. Eisenhower, his chairmanship of “Hoover Commissions” under Truman and Eisenhower, his warm welcomes when he spoke at Republican National Conventions, and his publication of 32 books during the post-Presidential era, many of which became best sellers. He became friends with Raymond Moley and Joseph and John F. Kennedy, Richard Nixon, and General Douglas MacArthur, some of them neighbors in the Waldorf Astoria, where he spent his final days. He fought to the end, dying at 90. He is buried beside his wife Lou on the grounds of the Hoover Presidential Library in West Branch, Iowa, his birthplace.