How Common Is It for Former Presidents to Remain Active in Public Life? 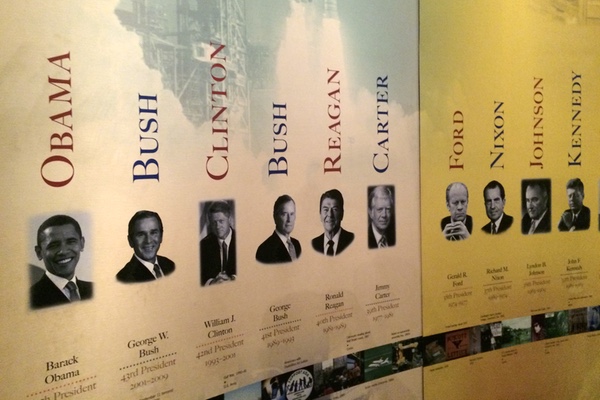 The four living former Presidents, soon to be added to by the retirement of Barack Obama on January 20, 2017, have become immersed in the 2016 Presidential campaign, supplementing  their actions in retirement before the controversies surrounding Donald Trump and Hillary Clinton became the most significant political news story of 2016.

Jimmy Carter has been outspoken in  his public support of Democratic nominee Hillary Clinton, despite past differences between him and former President Bill Clinton during Clinton’s administration in the 1990s.  George H. W. Bush and George W. Bush, the only two living Republican Presidents, have taken the unusual decision historically to refuse to support Donald Trump, the Presidential nominee of their party, due to his constant attacks and repudiation of the policies and record in office of the younger Bush, and made stronger in their opposition by his use of insults and ridicule against former Florida Governor Jeb Bush during the Republican primary season.

And Bill Clinton, having remained mostly silent until just recently, has had to deal with the personal attacks on him and his personal life, as part of the Trump campaign against his wife, Hillary Clinton.  The issue of the Clinton Foundation has become a political controversy as well, drawing the former President, and even their daughter, Chelsea Clinton, into the political morass. So the tradition of former Presidents being immersed in the issues of the nation they led continues.

Most recently, the Monica Lewinsky and associated scandals that led to Bill Clinton’s impeachment by the House of Representative in 1998, and his impeachment trial in the US Senate in 1999, leading to a not guilty verdict, has been utilized by Donald Trump in his attack on what he calls the multiple scandals of the Clintons over the past quarter century. Now, Bill Clinton has been subjected to Trump supporters wearing T shirts calling the former President a rapist, a personal attack more vicious than any other former Presidents, including Herbert Hoover and Richard Nixon, ever suffered.  But through it all, Bill Clinton’s public opinion ratings have remained high, unlike that with Hoover and Nixon. However, his wife's lack of popularity was a troubling issue for the 2016 Presidential campaign, and helped to cause her to lose key "Rust Belt" states, leading to her defeat in the election, even though she won the national popular vote.

Fourteen former Presidents wrote their memoirs or autobiography, keeping their names in the news.

All of the Presidents, except Martin Van Buren, who were alive when the Civil War began (John Tyler, Millard Fillmore, Franklin Pierce, James Buchanan) were involved in controversy, as they were critics of Abraham Lincoln and his handling of the Civil War, with Tyler declaring his loyalty to the Confederate States of America, giving up his American citizenship, and becoming a member of the Confederate House of Representatives. Denounced as a traitor, (which charge was also visited on Fillmore, Pierce and Buchanan), Tyler died in 1862, and the US government refused to recognize his death and lower flags to half staff, the usual action at the death of any President of the United States.  Tyler had tried to prevent the Civil War by calling a Virginia Peace Convention in Washington, DC, the month before the inauguration of Lincoln.

The Presidents most active politically included three who ran for the Presidency after being President.  Martin Van Buren ran on the Free Soil Party ticket in 1848, after losing the chance to be the Democratic nominee in 1844.  Millard Fillmore ran on the American (Know Nothing) Party ticket in 1856.  And Theodore Roosevelt ran on the Progressive (Bull Moose) party ticket in 1912.  Van Buren won ten percent of the vote; Fillmore won 21.5 percent of the vote; and TR won 27.4 percent of the vote.  Van Buren won no states, however, while Fillmore won Maryland (8 electoral votes), and TR won six states (Pennsylvania, Michigan, Minnesota, South Dakota, Washington, California) and a total of 88 electoral votes.  Of course, TR was also constantly active in promoting his views and writing articles in newspapers on every subject imaginable.

Then there is John Quincy Adams, who besides writing his voluminous diary from age 11 until shortly before his death in 1848, also was elected by the people of Boston to be their congressman for nine terms, serving from 1831 until his collapse on the floor of the House of Representatives in 1848, after leading the fight against slavery and the gag rule, which had banned discussion of slavery on the House floor.  Adams, therefore, served longer in public office and public controversy than any former President.

Following his disastrous four year term as president Andrew Johnson was elected to the US Senate from Tennessee.  He served a few months before his death.

Herbert Hoover, derided as a failed president, leaped back into public affairs in the late 1930s as an isolationist opposed to American involvement in European affairs (until Pearl Harbor).   He later served on two presidential commissions to reorganize the federal government.  He continued his active life through the Hoover Institution on the campus of his alma mater, Stanford University, right up to the end of his long life, and wrote numerous books.

Harry Truman continued to comment on public affairs after he left office, particularly when visiting his daughter Margaret Truman Daniel and his son in law, Clifton Daniel, a New York Times executive, in New York City.  And Richard Nixon wrote a number of books, commented on public affairs, and gave advice to all Presidents after him, including Bill Clinton in 1993, shortly before Nixon’s death in 1994.  After his defeat in 1976 Gerald Ford stayed active and spoke up on important social issues, became close to his former rival  Jimmy Carter, and became more highly honored as he set the record for longevity in his post-Presidency. Ronald Reagan was unable to be active, due to the oncoming problem of Alzheimers Disease, but publicly supported the Brady Bill on gun control, named after his press secretary, who was seriously wounded when Reagan was subjected to an assassination attempt by John Hinckley in 1981.

George H. W. Bush has suffered from a form of Parkinson’s disease, which put him in a motorized wheelchair for a number of years, but he has also spoken up occasionally on public affairs, and kept his commitment to skydive on his 80th, 85th,  and 90th birthdays (against the advice of his wife Barbara). His son, George W. Bush, has worked to avoid direct involvement in the political controversies that surrounded Barack Obama, unlike his Vice President, Dick Cheney, who drew attention several times for highly controversial attacks on President Obama. Bush’s reputation rose due to his gracious treatment of his successor, and he comes across as  more civil and somewhat less controversial by comparison with  Donald Trump, who has set a new low in American politics.

Finally, former Presidents Jimmy Carter and Bill Clinton (both of whom left the presidency in their fifties) have set a record of post-Presidential activity that Barack Obama (another fifty-something) plans to match.  Carter started the Carter Center to promote human rights, health care, and diplomacy around the world; expanded Habitat for Humanity and participated in building projects, along with his wife Rosalynn.  He published more than two dozen books and has been critical openly of his successors in the Oval Office.  He also won the Nobel Peace Prize and engaged in personal diplomacy in the Middle East, North Korea and Cuba, often to the dismay of the sitting president. Carter continues to speak up about public affairs even as he has battled cancer, and has now reached the age of 92, as George H. W. Bush did a few months ago. Bill Clinton has used the Clinton Foundation and Clinton Global Initiative to promote similar goals as Carter.

It appears that Barack Obama intends in his forthcoming retirement to pursue similar goals to Carter and Clinton.  At his young retirement age of 55, one of the youngest in Presidential history, one would think that Obama would wish to do other public service after a period of retirement, writing his memoirs, and establishing his Obama Presidential Library in Chicago. Obama’s library will be the 15th such institution, for every President since Herbert Hoover.

It would seem that it might be a good idea to provide former Presidents the opportunity to play an advisory role in American government by allowing them the opportunity to visit the US Senate when they wished, and to engage in commentary and debate when agreed to by the Senate majority. It would, hopefully, not be partisan, as former Presidents, no matter how controversial, have experiences and expertise that could be valuable in public discourse. Other than speaking to the news media or gathered audiences, permitting a presence in a non intrusive manner in the upper chamber of Congress would be a plus for helping to promote the advancement of American domestic and foreign policy.