The Roosevelts’ Ruthless Control of Their Image

William J. Mann is the New York Times bestselling author of Kate: The Woman Who Was Hepburn; How to Be a Movie Star: Elizabeth Taylor in Hollywood; Hello, Gorgeous: Becoming Barbra Streisand; and Wisecracker: The Life and Times of William Haines, winner of the Lambda Literary Award. His latest book is The Wars of the Roosevelts: The Ruthless Rise of America's Greatest Political Family (Harper 2016). 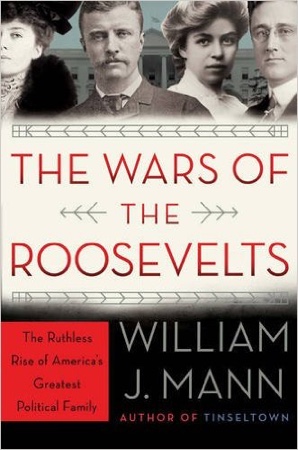 The machinations of the Trumps and Clintons — their ways around scandal and their masterful use of the media to contain negative press — have nothing on the Roosevelts, who more than one hundred years ago set the template for controlling and manipulating public narratives for political gain. Theodore Roosevelt ruthlessly managed the scandals of both his brother Elliott and his daughter Alice in order to get to (and stay at) the top, while Franklin Roosevelt sidestepped a scandal brought on by an extramarital affair with the help of his brilliant wife Eleanor. Franklin also exiled his nephew Taddy for the crime of marrying a working-class Jew — political poison in those days.

In research for my book, The Wars of the Roosevelts, I pieced together for the first time how these scandals were leveraged. Even at considerable cost to his family, Theodore went to great lengths to keep his brother Elliott’s misadventures from reaching the public. As a young man, he wanted more than anything to be president. Serving on the Civil Service Commission, he’d walk past the White House on his way home and his “heart would beat a little faster,” he admitted. His brother’s shenanigans threatened to upend his plans. In January 1891, Theodore received a letter from the New York law offices of William Howe and Abraham Hummel, informing him that Elliott had gotten one of the chambermaids in his house pregnant.

For some years now, Elliott had been a powder keg ready to blow. He drank too much and showed no respect for proprieties, embarrassing the family at social gatherings. Now, with a woman carrying his child, things could get a lot worse. Just eight years earlier, cries of “Ma, Ma, where’s my pa?” had nearly derailed Grover Cleveland’s campaign for president. Taunted about stories of an illegitimate son, Cleveland had barely won an election he was supposed to have taken handily, eking out a win in the popular vote by just one quarter of one percent. Until the end, a Cleveland win remained in doubt, with preachers blasting him from their pulpits and the Republican press publishing frequent heartrending affidavits from the mother of the little boy.

Such dishonor could not attach itself to Theodore. After years of government corruption, he was positioning himself as a new kind of politician: moral, principled, incorruptible. His whole public persona was predicated on his integrity and character. That was why Elliott’s misdeeds were potentially so dangerous.

Theodore acted ruthlessly. While other historians have presented his attempt to institutionalize his brother for alcoholism as noble and inevitable, I see it differently. According to a careful study of the correspondence, Elliott had stopped drinking; his wife had forgiven him for the affair; and the family (including Elliott’s seven-year-old daughter Eleanor) was living contentedly in Europe. Nonetheless, Theodore broke up his brother’s family and deliberately besmirched his reputation. ELLIOTT ROOSEVELT INSANE, BROTHER ALLEGES, screamed the headlines, and while two court rulings denied Theodore’s attempts at conservatorship, declaring Elliott sane, the damage was done. A few years later, Elliott died a broken man, kept apart from his wife and children on his brother’s order. The theft of her father would scar Eleanor forever; he had been the only person who’d been truly kind to her in her childhood.

Although Theodore hadn’t been able to avoid scandal, he had contained it; no mention was made of the chambermaid, Katie Mann, or the son she bore Elliott, who was named for his father. Indeed, if letters between Theodore and his sister Bye had not been preserved, we might never have known about the affair at all. Theodore did his best to consign his nephew to anonymity for all time. He hired a lawyer, Frank Weeks, to lure Katie Mann away from Howe and Hummel, and through this double agent paid her just four thousand dollars for her silence and exile. As it turned out, even this paltry amount was never paid, since Weeks ran off with the funds. As my research made clear, no one in the Roosevelt family ever inquired whether Katie and her son had received their money, not even after Weeks was found to have cheated dozens of clients, tried and found guilty, and sent to Sing Sing. Katie was left to raise her son entirely on her own; this so-called “illegitimate” branch of the Roosevelt family told me their story for the first time.

With his brother out of the way, Theodore’s political star rose quickly. Once he became president in 1901, however, he faced a new PR nightmare: his rambunctious teenaged daughter Alice. A “cult of Alice” had arisen in the national press; Ferdinand Sabathil composed the “Alice Roosevelt Waltz” and women copied Alice’s hats, shoes, and gowns. In a very real sense, Alice was the first teen idol. Yet while the First Daughter was Theodore’s goodwill ambassador by day, by night she was a transgressive socialite. The tabloid Town Topics reported that she wore “costly lingerie” and “indulged in fancy dances for the edification of men.” Even worse, she engaged in “stimulants” at society parties. In these reports, the president’s daughter wasn’t actually named, but most people knew the blind items were about her. Alice’s indiscretions emerged at the height of Theodore’s campaign for a second term in 1904, and it was only the deliberate silence of the mainstream press, affronted by the rise of tabloid journalism, that kept the scandal from becoming bigger than it was.

The innuendo didn’t disappear, however. After the election, Alice and her fiancé, Congressman Nicholas Longworth of Ohio, faced insinuations of influence-peddling once the press got wind of meetings they’d had with racetrack investors looking for ways to subvert the President’s well-known antipathy toward trusts. Once again the tabloids led the charge, and now it appeared that Theodore might have paid them off to keep Alice’s name out of their pages; in the ensuing investigation of the tabloids by the New York District Attorney, dozens of other prominent men, including Reginald Vanderbilt and Senator Chauncey Depew, were revealed to have made payments. The President, however, was never officially named. The whole affair reached an appropriately ghastly conclusion when, in August 1905, one of the tabloid editors under investigation, Robert Criswell, jumped in front of a train entering the Seventy-Second Street subway station. Theodore, fortunately, had had the foresight to send Alice off on a goodwill tour of Asia, sparing her whatever questions might have been lobbed her way.

Like his fourth cousin, Franklin Roosevelt also had his eyes on the White House from a young age. Carefully and deliberately, he followed Theodore’s footsteps, but nonetheless veered off the path in 1918 when he began an indiscreet affair with his wife’s assistant, Lucy Mercer. So intense was the affair that Franklin was reportedly considering divorce — until his wife Eleanor and mother Sara pointed out the political suicide he’d be committing. As ambitious as her husband, Eleanor agreed to forgive and forget — and, eventually, to give Franklin the freedom to pursue other extramarital friendships so long as they never risked scandal as this one had.

Eleanor Roosevelt had learned how to be tough. She’d survived a cold, harsh childhood after her father was stolen away from her by her uncle. Never, Eleanor vowed, would she be lonely or abandoned again. Eventually she embraced the same sort of freedom for herself that she’d granted Franklin. When the Roosevelts took up residence in the White House in 1933, the nation was unaware of just how nontraditional its new First Family was. Living under the same roof were Franklin and his assistant and intimate companion, Missy Le Hand, while Eleanor welcomed her lover, journalist Lorena Hickok — all of them amiable, companionable and cooperative.

A less happy ending awaited Franklin’s nephew Taddy, however. Raised almost as brothers—Franklin and Taddy were the same age—the two men couldn’t have been more different. Franklin was studious and goal-oriented with dreams of political glory; Taddy cared only about tinkering with automobiles and drinking with his buddies. When Taddy—the heir to a great fortune through his mother, Helen Astor—married the factory worker Sadie Messinger in 1900, the resulting headlines shocked New York’s bluebloods. Sadie wasn’t just working-class; she was also Jewish, and Franklin, on the cusp of his political career, feared the scandal could be ruinous for him politically. Taddy, he decreed, was banished from the family aristocracy. “One can never again consider him a true Roosevelt,” he declared. His kin followed his edict, and Taddy was excluded from the family from then on. Even worse, his wife’s reputation was deliberately blackened: every subsequent chronicler of the family would accept the contemporary description of Sadie as a woman of “loose morals”—a prostitute—although there was never any evidence of this at all. Not surprisingly, the marriage of Taddy and Sadie did not survive this unharmonious beginning; both died unhappy and alone.

The Roosevelts were America’s greatest political family; Theodore and Franklin two of its greatest presidents. Their mastery of politics created a more equitable, more verdant and safer nation. Yet their skill at managing events was wielded not only for the public good, but also for their own private needs, no matter the cost to themselves or those they loved.