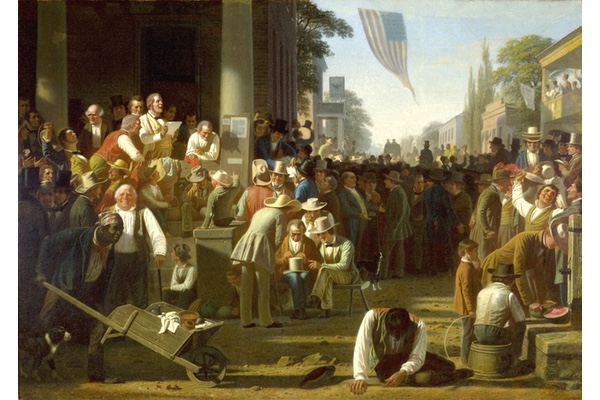 George Caleb Bingham’s “The Verdict of the People” from 1855, which historians say depicts public reaction to a likely proslavery candidate’s election victory, was chosen as the painting that will be displayed behind the president’s table at the inaugural luncheon. (Saint Louis Art Museum)

Last week, a little-known tradition of modern presidential inaugurations brought unwanted attention to the St. Louis Art Museum. Since Ronald Reagan’s second inauguration in 1985, an American painting has served as a backdrop during the inaugural luncheon, at which members of Congress play host to the newly installed president. When Donald Trump is made the 45th president of the United States on Jan. 20, George Caleb Bingham’s “The Verdict of the People” will be the chosen painting, hanging on a partition wall behind the ceremonial head table in the Capitol’s Statuary Hall.

The painting was finished in 1855 by an artist best known for his Mississippi River scenes, which burnished the rough-and-tumble and often violent West into a benign and mythological place, ready for investment, development and full participation in American political life.

“The Verdict of the People,” which shows a large crowd celebrating or mourning election results in a Missouri town, is part of a series of three large canvasses created in the 1850s, each taking up the theme of democratic self- governance. The paintings have long been resident in St. Louis; since 2001, all three have been owned by the St. Louis Museum of Art.